[Opinion]: President Trump is putting people in danger with his health suggestions 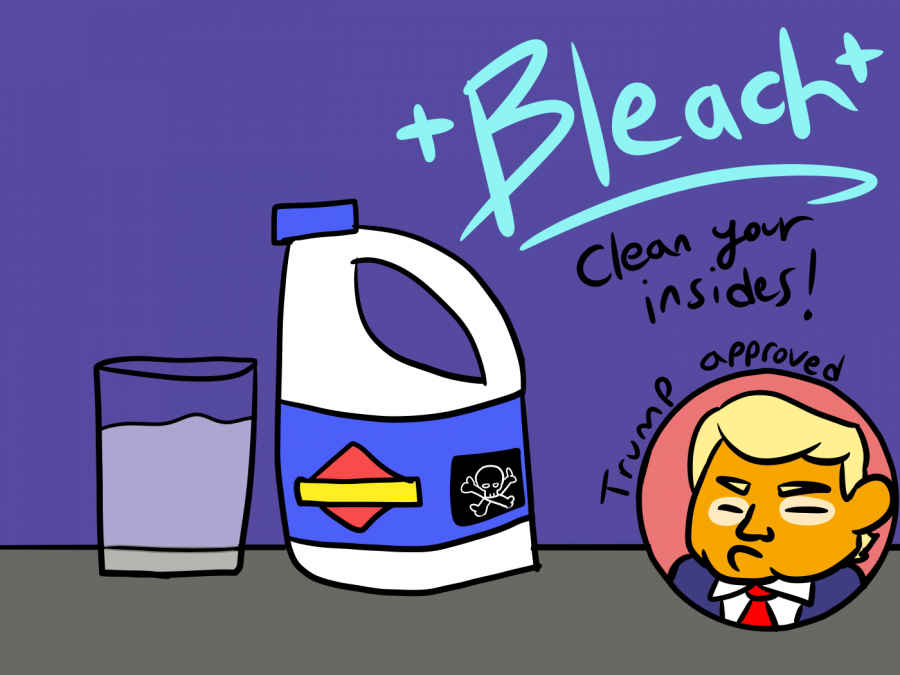 President Trump suggested disinfectants as a way to clean the body of COVID-19. Graphic by Leah Ronkin.

On April 23, President Trump gave a press conference intended to brief reporters on the White House’s response to COVID-19 that shook the nation. Amid the current pandemic panic, he, along with many other countries, has been scrambling to find a miracle cure for the highly contagious virus. In that conference, Trump suggested the possibility of injecting disinfectants such as Lysol into the body. Not only was his statement completely nonsensical, but it was also downright dangerous.

This is not the first time that Trump has suggested something radical as a cure. His first initiative to fight COVID-19 was to use the anti-malaria drug hydroxychloroquine. When some people heard about this, they jumped to try it, leading to devastating consequences.

One study conducted by the Journal of the American Medical Association found that patients using high doses of the drug daily were experiencing irregularities in heart rhythms so severe that they had to cancel the study early. Many of the patients involved in the study died, with a lethality rate of 39% in the high-dosage group.

These deaths aren’t only happening under controlled conditions. Regular people, like an Arizona couple who feared to get the virus, have taken any form of the drug they can find. The aforementioned couple took a fish tank cleaner containing chloroquine phosphate which resulted in the husband dying and the wife becoming violently ill.

It is clear that Trump does not realize his influence on people. To so callously suggest these unproven methods as miracle cures are putting people’s lives in danger. As if suggesting a prescribable medicine that has little research done on it was bad enough, Trump now suggests something that has proven lethality.

“I see the disinfectant, where it knocks it out in a minute. One minute. And is there a way we can do something like that, by injection inside or almost a cleaning,” Trump said in regards to why he felt his idea would work.

But Lysol doesn’t only work fast on germs, it also works fast on human tissue. Many of the products include bleach in them. If the concentration is high enough, ingesting even a little bit of the product could cause irreversible damage. The damage could be even worse if injected directly into the bloodstream.

“As a global leader in health and hygiene products, we must be clear that under no circumstance should our disinfectant products be administered into the human body (through injection, ingestion or any other route),” RB, the makers of Lysol and Dettol, said in a public statement.

If people follow the patterns they showed with hydroxychloroquine, then they will likely try to use Lysol injections as a remedy. For some people, Trump’s word is like gospel, even if he tries to take it back and blame it on sarcasm. Because of Trump’s mad dash for a cure, he is endangering the lives of thousands of Americans who believe the president actually cares about their life. If he does not think more carefully about what kind of cures he suggests, the amount of blood on his hands will only grow.