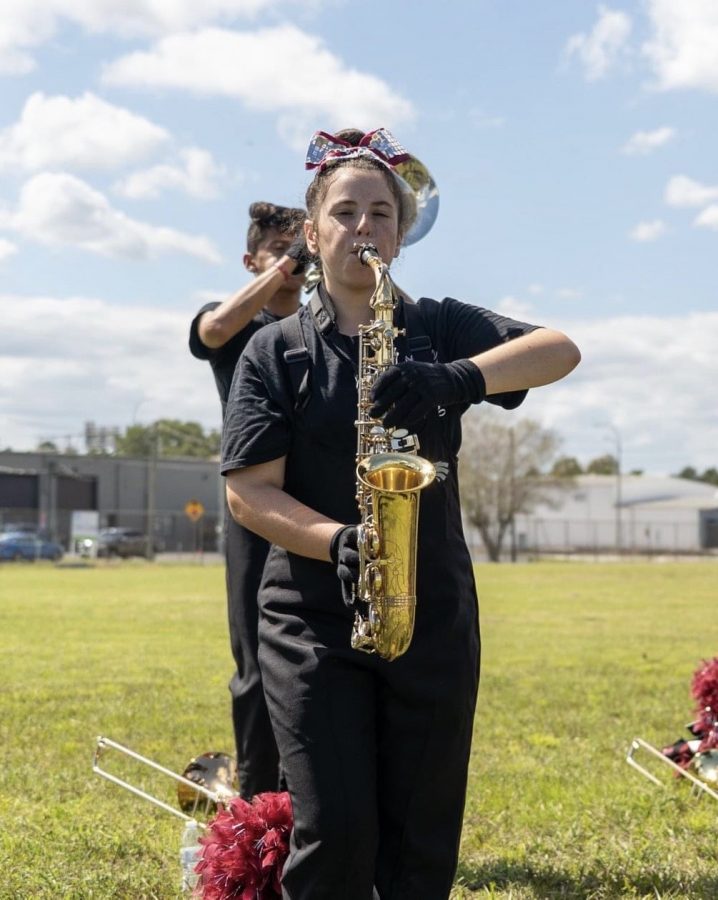 Sophomore Nicolette Gulla, is preparing to perform at the Orlando Bands of America performance. Photo courtesy of Keith Wechsler.

Nicolette Gulla, a sophomore at Marjory Stoneman Douglas High School, has been an alto saxophone player for several years. She began in the sixth grade and is going into her sixth year of playing the instrument.

Her older brother, Guido, first inspired her to play. Gulla grew up watching him perform as a member of the middle school bands, as well as the Eagle Regiment.

“Watching the Eagle Regiment perform was amazing. The first time I watched I thought to myself ‘this is what I want to do myself’,” Gulla said.

Marching band consists of most of the first half of her year, but it gives Gulla many unique and once in a lifetime opportunities throughout the entire year. This year, they participated in both the Super Bowl and marched in the Disney parade. The band also performs at a variety of competitions throughout the state of Florida, including Bands of American in Orlando and the States competition in Daytona.

“My favorite part about marching band is the feeling of performing,” Gulla said. “When we perform there’s a rush, the crowd cheering, the choreography, forms, and the music is all so thrilling.”

The second half of Gulla’s year consists of concert band. This season gives opportunities for solos, which is quite nerve-wracking for Gulla, but she knows everything is for the good of the group. The bands work tirelessly throughout the season to get their performance to be perfect.

“When we first get the music we don’t sound superior right away, we work every single day going over the same pieces for months,” Gulla said. “It gets frustrating but the final product is amazing and feels very rewarding.”

Being involved in many different performing bands, Gulla needs to practice as much as she can to build up lip and lung strength.  She practices regularly, either every day or every other day for about an hour.

This upcoming year, Gulla is going to be a junior. She is so excited to help younger students and make everyone feel as comfortable and confident as possible. She understands the struggles of maintaining other activities alongside band, so she wants to make sure she helps members with any issue they are having, inside or outside of band.

“I want them to look at me as a person they know they can trust. This can benefit them and the program as a whole,” Gulla said.