THE EAGLE EYE • May 12, 2020 • https://eagleeye.news/14889/opinion/opinion-netflix-has-negative-impacts-on-teenagers-during-quarantine/

[Opinion] Netflix has negative impacts on teenagers during quarantine 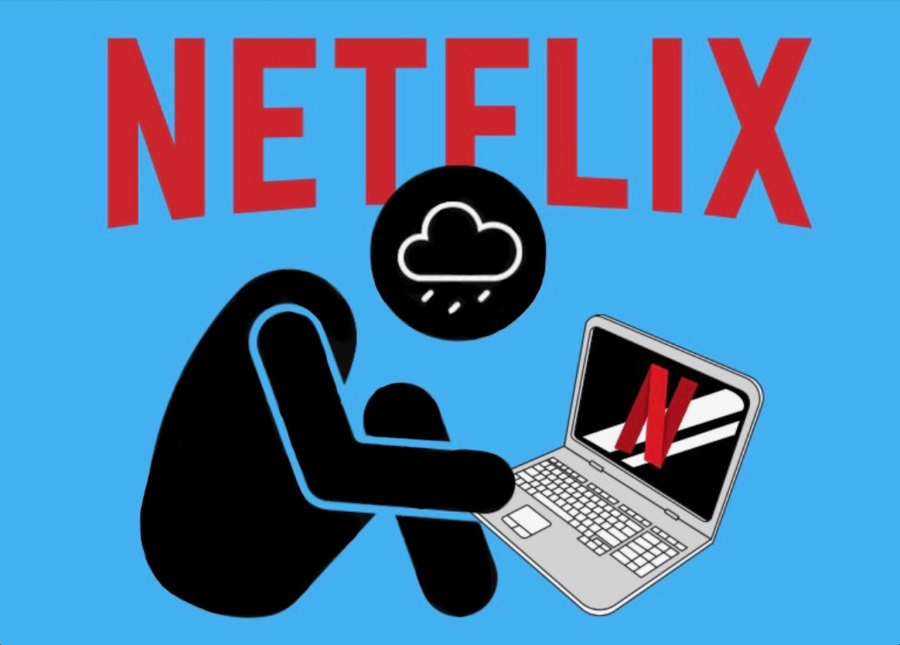 The mental health of students are being negatively effected due to the overuse of Netflix. Graphic by Einav Cohen

To pass the time as a good samaritan in Broward County while still being under a stay-at-home order, Netflix has become a vital part of life in quarantine.

Since the global lockdown, Netflix has released an array of youth-targeted entertainment ranging from teen comedies to action and adventure. As a teenager stuck at home, spending the time alone watching teen-targeted shows and movies where characters are enjoying their youth with friends only enhances the loneliness teenagers are experiencing today.

For example, a Netflix original show such as “Outerbanks” depicts a group of four average teenagers living life as it was before quarantine, with the twist of finding a lost treasure. The show is set on an island in Outerbanks, North Carolina during the summer, a time where kids spend nearly every waking minute in the company of their friends. Together they embark on a journey where daily struggles of teenagers are depicted such as economic struggle, difficult parents and societal standards.

The impact of watching a dystopian version of peers your age having the time of their life while isolated at home with family causes longing and melancholy. The standard experiences teenagers should be living and memories they should be making during these limited years of youth are ones of bliss and carefreeness; being cooped up at home weighs in on the mental state of teenagers who can only think of what would have been. The envy of actors in Netflix shows such as “Outerbanks” negatively impact the minds of teens whose social nature is being suppressed, leading to depressed thoughts.

Netflix is being put in the limelight specifically due to its domineering ability to upload new and original content only to then flood accounts with advertising for this original content. One of the many Netflix series that have been released during quarantine is yet another teen-targeted show called “Never Have I Ever.”

While being critiqued by anonymous viewers online as “cringe” and “painfully embarrassing,” the show is one of few that depicts the home life of an Indian American girl attempting to conform to society as a teenager in America today. For high school students synonymous with the characters of the show, the occurrences happening to them as simple as talking to their crush and working on group projects with friends can be what they miss most during the quarantine.

These younger audiences have expressed through social media platforms that what used to be simple daily tasks is what they miss the most. Living in the age where apps such as Snapchat store memories from three years prior, teens have been given both the gift and curse of being able to look back and reminisce on all of the memories and good times with friends. Logically, watching these teen dramas on media platforms such as Netflix is one motivator for teens to relive their own experiences by looking back at memories.

Overall, though Netflix has released entertaining content for its platform during this quarantine, overloading on this entertainment can endanger the mental state for teenagers who indulge in the lives of fictional high school characters to fill the void of missing their own adolescent experiences. It is important to remember the reality we are in will not last forever and that together we will get through this dark time.