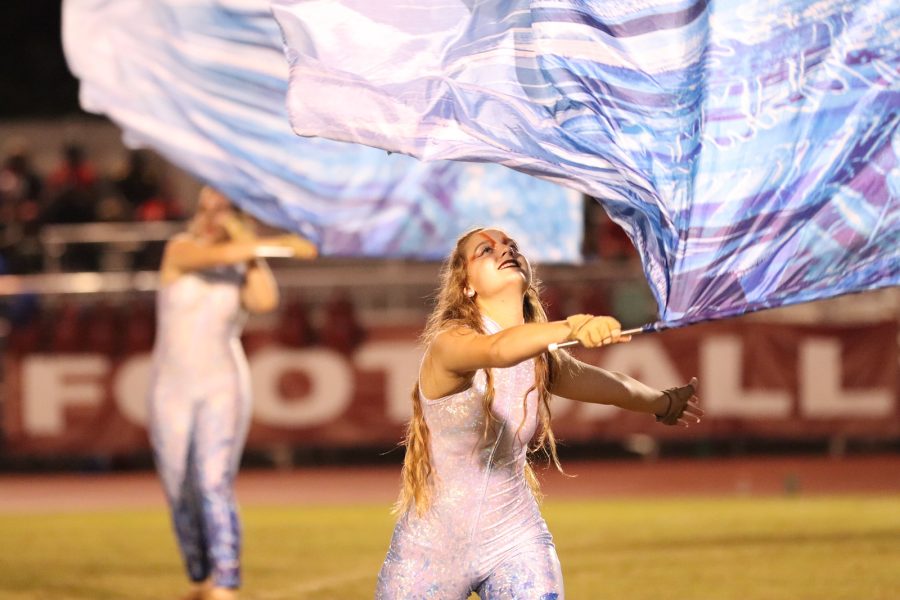 Throughout the first week of May, the Marjory Stoneman Douglas High School Color Guard began posting on Instagram about why people should join as a way to kick start their own spirit week. Color guard requires a lot of dedication and commitment, so they are looking for determined and hard-working students to join.

“There are absolutely no requirements or experience needed to join our color guard program because we teach and provide you with everything you’ll need to know,” color guard captain and junior Marla Eveillard said. “This program is open to all genders and all grades in high school.”

The color guard leadership positions include captain, co-captain and equipment manager. For the remainder of this year and next year, the overall captain is Marla Eveillard. Sophomores Lauren Clark and Emily Liin are fulfilling the co-captain roles. Additionally, the equipment managers are junior Haleigh Gross and sophomore Delaney Walker.

Color guard refers to a group of performers who perform dance routines with different equipment, including flags, plastic rifles, plastic sabres and swing flags. The members of the color guard are a team that work and perform together to create a visual performance.

“I joined color guard because of my friend Haleigh. Surprisingly, my cousin and her brother went to Douglas together and did color guard,” Eveillard said. “As an 8th grader at the time, I wanted to find my ‘thing’ in high school, so I joined the team with her, and it was the best decision I ever made.”

The members posted what their favorite thing is about color guard on Saturday, May 2. There were several responses from each member that posted, including traveling, making new friends and performing.

On the fourth day of color guard spirit week, Monday, May 4, some of the members posted their favorite memory from color guard.

“My favorite memory from color guard is marching in the Disney parade,” Meoni said.

On the last day of color guard spirit week, Tuesday, May 5, some color guard members posted why people should join color guard.

“People should join because our color guard program offers so many opportunities for us. This will also eventually turn into your family that you will remember for years after high school,” Eveillard said. “We are much more than flags in a gym. Our color guard program has been one of the most successful programs at Marjory Stoneman Douglas since the early 2000s ranked on a word class level.”

The color guard team has already begun practicing this month. They are currently holding Zoom rehearsals for two hours every Tuesday and Thursday. When quarantine due to the COVID-19 pandemic stops, the color guard will start officially practicing at MSD for band camp in late July.

“The Stoneman Douglas Color Guard will make one grow so much as a person over the course of their years in high school. It is such a privilege to have such a successful program at this school. Out of the numerous teams in the country, Douglas has been a finalist in Dayton, Ohio in the world class category since 2015,” Eveillard said. “Our coaches do not only teach us how to spin, they also teach us valuable life lessons. Mr. Broadbent and his team have been known in the color guard community in South Florida for numerous years and are extremely respected.”Overall, the MSD color guard would like more students to join. This program involves a lot of travelling, practicing, making memories, and meeting new people. Members can join by filling out a registration form at stonemandouglasband.com. Students who want to join can also contact the color guard director Mr. Dean Broadbent at [email protected] if they have any follow up questions.