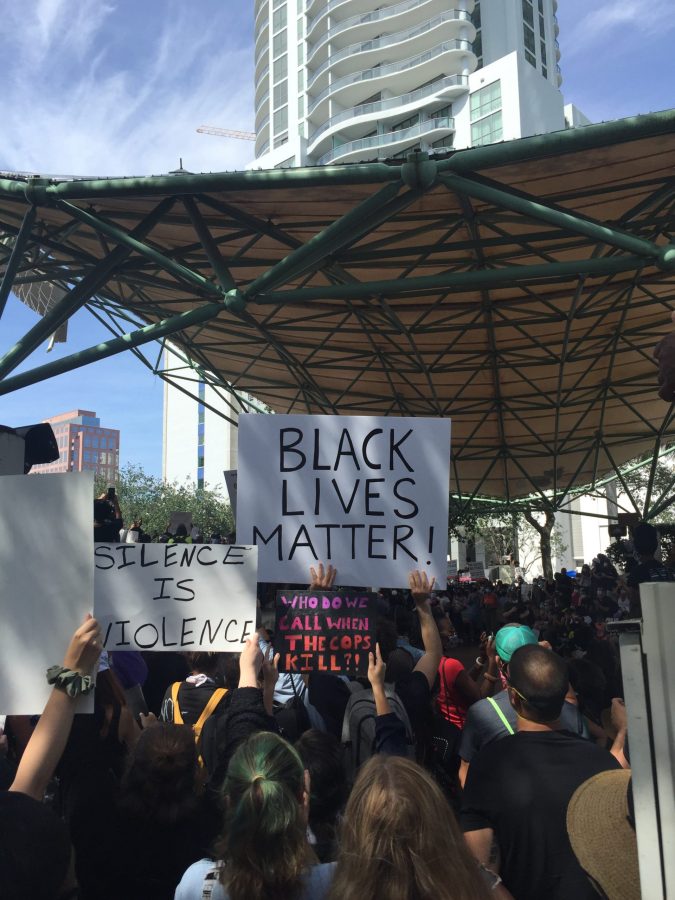 In the past week, the impact of the Black Lives Matter movement became very prevalent in Broward county. Residents from all over the county gathered in Fort Lauderdale, Coral Springs and Sunrise to peacefully protest against police brutality and institutionalized racism.

Recently, a multitude of Black Lives Matter protests have been occurring in response to the unjust killing of George Floyd on May 25.

Floyd was arrested in Minneapolis, Minnesota after he was accused of using a counterfeit $20 bill at a local grocery store. During his arrest, the police officers responding to the call claimed Floyd was resisting arrest, yet videos filmed by bystanders depict otherwise. Officer Derek Chauvin proceeded to use force on Floyd, even thrusting his knee onto his neck for 8 minutes and 46 seconds while he was pinned to the ground. Floyd was pronounced dead about an hour later.

On Tuesday, June 2, a Coral Springs protest took place on West Sample Road and began at 2 p.m. and ended at 4 p.m. It was organized by two teenagers and cousins, Mahek Manjiani and Shayan Shivji. The students attend Florida International University and Coral Springs Charter school, respectively.

The protest merely began as an idea the two had on the previous Saturday afternoon, yet quickly became a reality due to the help of members of the official BLM, local organizations and government officials.

“It was sleepless nights, phone calls, meetings and so much put into planning this protest. Publicizing on all media outlets truly informed the whole community to come out,” Manjiani said.

Being of Pakastani descent and having experienced prejudice and discrimination firsthand, the pair wanted to raise awareness of the unfair treatment of African Americans.

“I think my main focus was to call upon the concentration of prejudice enlisted on the black community,” Shivji said. “As minorities we understand what discrimination looks and feels like. And of course all lives matter that goes without saying but it’s important to realize that one specific group is being impacted much more.”

The hours prior to the event were greeted by light rainfall, but many volunteers showed up to help with the preparations and even chanted for their cause in the rain. Overall, the protest attracted over 300 students, activists and local business owners.

Marjory Stoneman Douglas High School junior Jordan Campbell attended the protest to show the government that people of color will not stand down until change is made in the United States.

“I thought it was important to go to the protest to stand up for what is morally right because this movement is not a political issue anymore, it is a human rights issue. African Americans should not be scared of the people who are supposed to protect them in this country,” Campbell said. “And I also believe that until the officers who have killed people due to their skin color are charged for their actions, we should use our voices and not stay silent.”

Residents of Sunrise also organized a BLM protest on the same afternoon. The protesters marched down Sunrise Boulevard, causing the police to shut down roads down to NW 136th Ave.

MSD alumnus Carryl Jerome was one of many who attended the march, fighting for the justice of late black citizens that were whose lives ended at the hands of the police.

“I hope change will come from the protest. It caught peoples’ attention now and it can go further. The people in power need to see we mean business. We expect change and nothing less,” Jerome said. “In a positive way. In a way that the future black kids can be protected by the foundation us current black folks are laying for them. We fight for our people now and for the future.”

Although these protests were successful in remaining peaceful, the situation in Fort Lauderdale was rather different. On Sunday, May 31, simply two days before the protests in Coral Springs and Sunrise, protesters were met with tear gas and rubber bullets.

Over 1,000 people attended the official protest in Fort Lauderdale, which began at 3 p.m. and ended at 6 p.m. Many people volunteered to hand out snacks and water at the protest due to Florida’s warm climate. Among the volunteers was MSD senior Anna Bayuk, who refuses to stand by and be complicit in the systematic oppression of black Americans.

“There were some really powerful speakers present from the community, who conveyed the true tragedy of this moment and its significance in a historical perspective incredibly well. After the speakers, we marched down to the police station, where we took a knee. There were many, many people there, and it truly felt like a historical moment,” Bayuk said. “I thought it was important to attend because, as a white ally to the Black Lives Matter movement, I cannot allow myself to be complicit in the systemic oppression of black Americans by the system, or stand by and silently watch acts of police brutality. Going to a protest felt much more concrete than donating or posting on social media about the movement, although I did that too. Being black in America shouldn’t be a death sentence. I went to the protest because right now, it can be. That cannot continue.”

However, what began as a peaceful protest turned into chaos after a police officer was seen shoving a kneeling woman once the ‘official hours’ of the protest came to an end. Protesters responded by throwing water bottles at the officer and mayhem ensued thereafter.

Another student-led protest in Boca Raton is planned for Monday, June 8 at 3 p.m. The Black Lives Movement continues to spread across the nation, protesting against racial inequality and systematic racism.