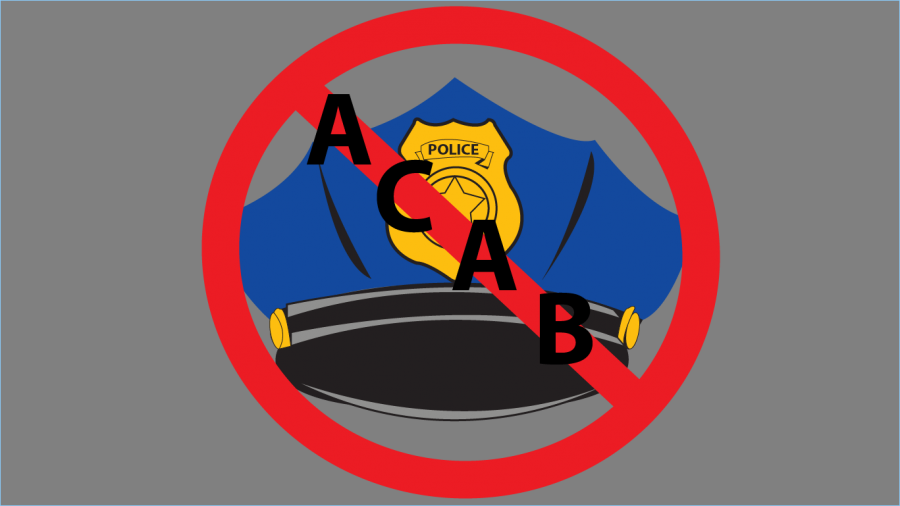 The term "ACAB" has sparked wide-spread debate over whether or not the phrase is anti-police or simply a critique of the institution. Graphic by Brianna Jesionowski.

As Black Lives Matter protesters take to the streets, new mantras have been created and widely popularized through social media. Among these slogans are “No justice, no peace,” “Defund the police” and arguably the most controversial “All Cops Are Bastards”, or “ACAB” as it is commonly referred to.

As enticing as it is to chant these phrases in unison at protests, it is equally as important to understand their significance and the weight that these words carry.

I have seen both sides of the ACAB argument and have found that a large portion of the debate derives from a misunderstanding of ACAB’s definition.

Those who disapprove with the use of the term ACAB argue that it is disrespectful, as they believe that it means, “not all cops are bad.” However, that seems to be a common misconception among opponents of the phrase.

According to the Anti-Defamation League, the acronym ACAB does in fact stand for “All Cops Are Bastards.” To further understand this we must understand the meaning of the term bastard.

In this case, it is neither referring to an orphan nor someone of low respect. Rather, the term refers to the word ‘bastardize’ which means to change something in such a way as to lower its quality or value. In other words, to make something corrupt.

That being said, all cops are members of a bastardized institution, an institution created to keep the public safe but has been ingrained with ideals of racism and superiority, countering its original purpose and therefore lowering its quality as a whole.

Although it feels redundant to clarify in these times of injustice, the police system has proven to be bastardized and corrupt on a multitude of occasions. The most prevalent example is the brutal killing of the 46-year-old African American man, George Floyd.

On Sunday, May 24, in Minneapolis, Minnesota, George Floyd was detained and violently pinned to the ground under the knee of a white police officer. The brute force of these restraints led to the death of George Floyd and the arrest of the officer on accounts of second-degree manslaughter and second-degree murder.

However, in most instances of police brutality, the officer at fault tends to escape punishment and proves to be placed above the law. Take, for example, the case of Breonna Taylor, a 26-year-old black woman who was shot and killed in her own home on March 13 of this year.

Taylor’s ex-boyfriend had been using her address to transport drugs via mail. The officers involved in the case acquired a no-knock warrant from a judge that allowed them to essentially break into her home.

Three officers fired a total of thirty-two bullets into her apartment in response to a single warning fire from her boyfriend Kenneth Walker. One of the three officers involved in the killing was recently indicted while the other two have not been charged at all.

Compare this to the case of seventeen-year-old Kyle Rittenhouse, a white teenager who shot and killed two protestors this August. Despite police knowing what he had done, he went home and slept in his own bed the night of the shooting.

Rittenhouse has since been arrested and charged with murder but his actions have been justified, in some cases even by prominent political figures such as Donald Trump Jr.

“We all do stupid things at 17,” said the eldest son of President Trump.

While the debate continues, something that both sides can agree on is that not every individual police officer is a criminal or is capable of committing acts of violence due to blatant racism.

What must be understood is that each police officer makes the conscious decision to put on a uniform and participate in an institution that has yet to take significant action towards fixing its prominent systemic racism.