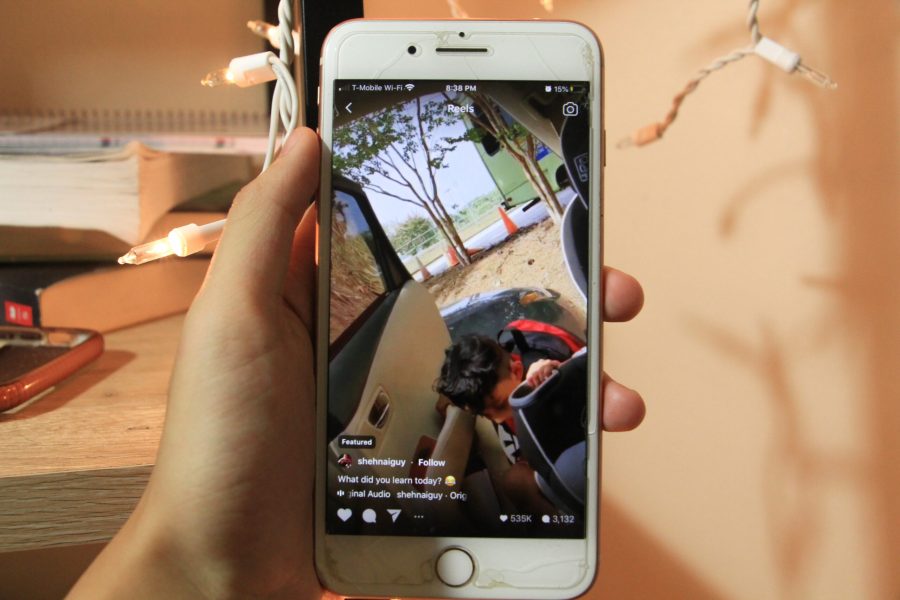 Reels is a new feature on Instagram that allows users to make 15 to 30 second videos. Photo by Bryan Nguyen

Reels is a new feature on Instagram that allows users to make 15 to 30 second videos. Photo by Bryan Nguyen

After hearing the news about the United States trying to ban TikTok, various social media applications quickly developed new updates, with similar video formats, in order to catch the eye of the app’s users. After months of consideration, Walmart and the Oracle, both American owned companies, partnered with ByteDance, TikTok’s parent company, to keep the app in the U.S.

On Aug. 5, Instagram launched Reels, a new video format that allows people to make short 15 second videos. It was created due to users feeling unsafe on TikTok because of security issues. On Aug. 22, an update was released giving Reels its own homepage and extending the video time to 30 seconds.

Reels is an extension of Instagram, using the same platform for more content. While TikTok is a social media app where users can post unique content, participate in trends and show off their creativity through dance or comedy videos. Though their content is roughly the same, Reels has a shorter time frame.

Many public accounts are dedicated to reposting popular TikTok videos as Reels, as well as original content creators reposting their older videos on the new platform.

Students are often made aware of the dangers of social media; however, the controversy surrounding TikTok made some people unsure about the app’s overall safety. Critics of TikTok point to the company’s close ties with the Chinese government, which has led some to conclude that user data is not secure and could be supplied to a foreign government.

“TikTok has also had many problems with our safety and security. Apparently, our information has been stolen, and that is why it was almost banned a couple times,” freshman Angelina Kennedy said. “There are always risks in using social media, but this might be bad.”

Some Instagram users feel that Reels are safer because they aren’t getting their information stolen by a company. However, Instagram, which is owned by Facebook, is known to sell data to advertisers. Users acknowledge this when they agree to the app’s terms and conditions. Still many users are more comfortable with Instagram, as it is more established and is American based.

Others feel that Reels is a safer environment for its users, all together. While most of the content is similar, there are things that some people wouldn’t put on Reels that they would on TikTok.

“I think Reels is safer than TikTok because TikTok has a lot of dark humor jokes,” freshman Rachel George said. “There are a lot of inappropriate jokes that people don’t understand and go searching for then instantly regret their decision. While Instagram Reels is safer and doesn’t lure you to look at inappropriate stuff, it’s not funny.”

Some believe that Instagram is not the right place for a video format like Reels. Instagram is used for both professional and personal reasons. Many people’s accounts are followed by their family and friends who might not be into their original content.

“I feel like Instagram saw how popular TikTok was getting so they kind of tried to copy them,” freshman Macy Meis said. “I think Instagram is much more professional and TikTok is more just for fun.”

Meis thinks that TikTok is more for entertainment purposes rather than professional photos or videos.

“I like TikTok better because there are millions of entertaining short videos to watch and it never gets boring because they all are 15-60 seconds long,” freshman Hannah Hackney said. “It’s always fun to see new trends catching on and how creative people can be within a couple seconds. They can be funny and intriguing and it’s somewhat more interactive than reels.”

Some social media professionals do not believe that Reels will hold the same success that TikTok has because it is a copycat.

“Reels is unlikely to attract what makes TikTok special, its creators, and for that reason, it cannot truly ‘replace’ TikTok, here or in the US,” Chief Executive and Founder of The Social Element, Tamara Littleton told The Drum. “This boils down to one key reason: organic reach.”

As of now, it doesn’t seem as though Reels is going anywhere as Instagram highlights it more and more on the app. However, it’s competition with TikTok is not over yet and both social media platforms will be reaching for the next big thing.