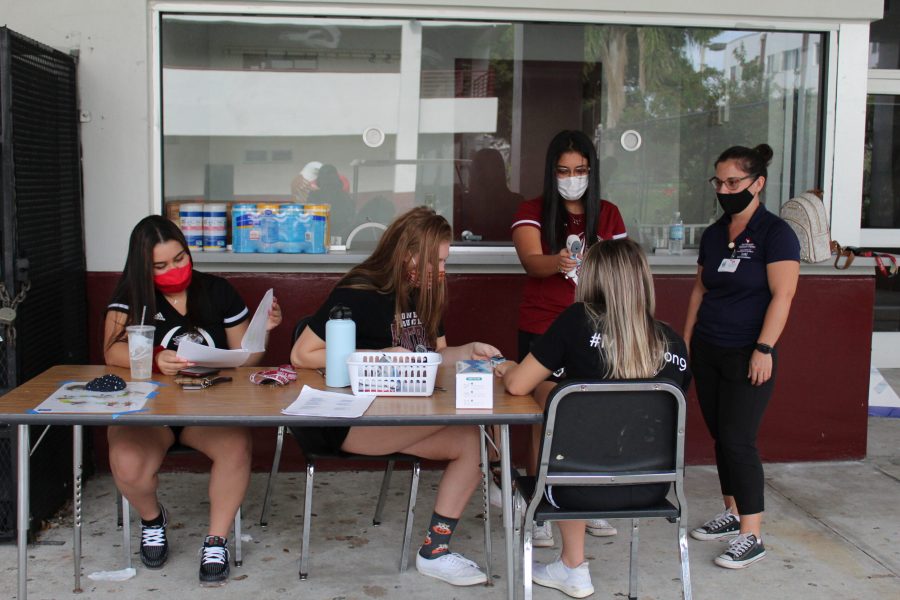 Volunteers check in a student athlete at a voluntary conditioning session. Student athletes must be submit to a health screening before entering the campus for conditioning. Photo by Destiny Cazaeu

Volunteers check in a student athlete at a voluntary conditioning session. Student athletes must be submit to a health screening before entering the campus for conditioning. Photo by Destiny Cazeau

Football was one of the two MSD sports to begin voluntary conditioning once the school year began. On Sep. 21, both the Marjory Stoneman Douglas varsity football team and the men’s and women’s cross country teams held their first voluntary conditioning session of the season. This was the beginning of Broward County Public School’s Return to Play phased plan.

During the offseason, athletes conditioned by themselves, and had to work with limited access to public areas such as fields and gyms. However, as many places around Florida and Broward County began to reopen, athletes made their way back to conditioning as a team.

Social distanced, some athletes conditioned in small groups privately. This was a major step towards building teams back to their pre-pandemic prime.

Eventually, coaches were given the green light to officially hold voluntary conditioning sessions for MSD teams, which was part of Return to Play Phase 1. While this excited players and coaches, safety precautions had to be taken  in order for these sessions to start and to be able to continue. 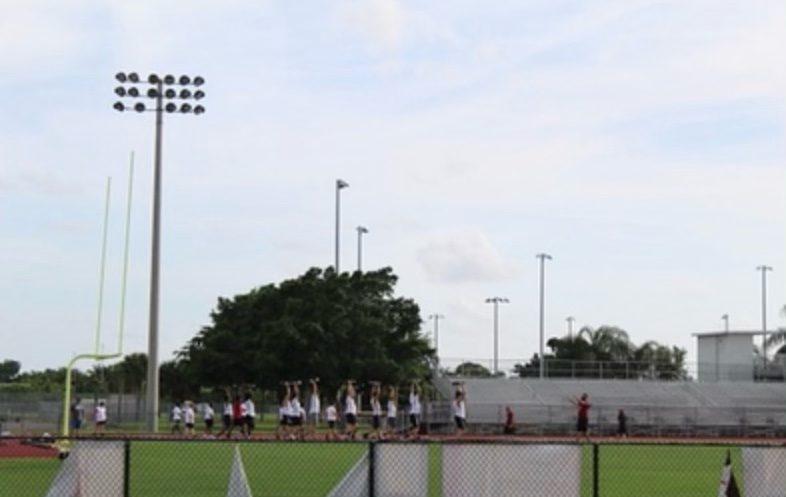 “When we practice, we practice in different groups and don’t interfere with other groups,” linebacker Prince Aldeus (72) said. “Since we just started practicing in the weight room, we are constantly wiping down all the equipment. We wear gloves, masks and social distance.”

The team is preparing for their first game, which is currently scheduled for Oct. 29 at Coral Springs High School at 7 p.m.

Since cross country is a non-contact sport, it makes running and conditioning easier with separation among players easier than contact sports.

The team began conditioning unofficially on their own over the summer at Pine Trails Park.

Athletes on MSD Cross Country practice by running for several miles on paths.

However, once the school year began, the voluntary conditioning sessions were “officially” school-board sanctioned. This means participants have to follow the precautions put in place by the school district.

“Practices for cross country have not really changed since the pandemic,” senior Brett Lickerman said. “But we have been following social distancing guidelines, wearing masks before and after practice, and splitting up into smaller groups for our runs.”

The conditioning pods are mostly decided by the coaches. However, athletes can request to practice with a certain pod to make time for homework or other extracurricular activities. Separating the team into pods allows for a more productive practice while practicing correct precautions.

Practices, while implementing new styles to be safe, have shown little change in the athletes’ performance. In fact, the constant social distancing and isolation causes the practices to be great ways for the players to socialize and exercise to the best of their ability.

“I don’t believe the new type of practices have an impact on the team’s performance,” sophomore Tevye Singh said. “We keep running and pushing ourselves the same way we would as if we had the same practices as before.”

Amidst these unprecedented times, MSD athletes are conditioning to improve performance before the season starts.

On Monday, Oct. 12., BCPS will enter Phase 3 of their Return to Play athletics plan. This will allows student athletes to practice for up to 120 minutes and begin using sport-specific equipment. All students must submit to temperature checks and bring their own water bottles, shoes, towels and other personal equipment.