[Opinion] Fans should be allowed to attend NFL games 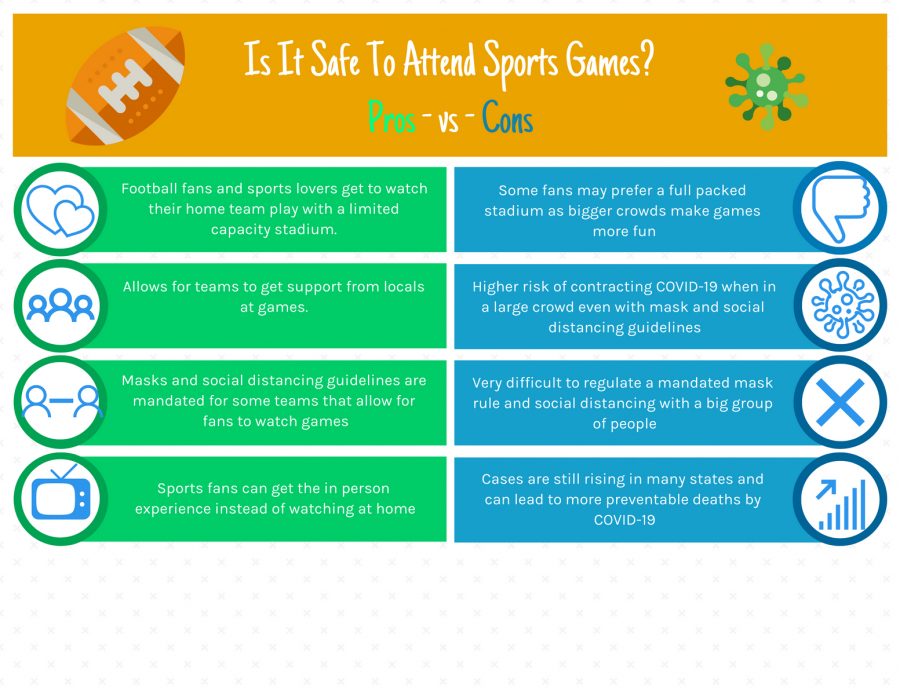 With people attending football games during this time, there are many potential health risks. A good way to determine whether or not you should attend a NFL game is making a list of pros and cons. Graphic by Hannah Kang

Throughout the past seven months, the question of allowing fans to attend football games has been in the air. Fans across the country worried about the possibility of not being able to watch their favorite teams due to the COVID-19 pandemic. However, the National Football League (NFL) gave each team the option to have a limited capacity at each game.

Every stadium that is opening will enforce that fans wear a mask at all times. According to CBS Sports, “The requirement will be enforced league-wide and supersedes [the] lack of a local lawful mandate.” Teams must limit the number of fans able to enter each game to ensure the safety of the other fans and players, though not all stadiums are allowing fans in.

If people were to wear masks and be socially distant, more people would feel safe attending a football game. If there were no safety guidelines enforced, many people would feel less safe going. However, this only occurs when people are spread out. With these precautions set in place, I personally feel safe enough to go to a game.

Not every stadium is allowing many fans in. According to The Washington Post, stadiums are holding anywhere between 2,500 to 25,021 fans. The number depends on how many people the state permits the teams to allow.

I would not go to a Dallas Cowboys game because it allows 25,021 fans and the stadium holds 80,000 people. That is about 31% full, meaning that people are not going to be as spread out.

Going to a football game is a really cool experience and when people go now, they almost have the stadium to themselves. On the other hand, going to a limited capacity game is far different than a full seating game. When every seat is filled, it is fun to be around a big crowd that is rooting for the same team. With today’s special circumstances, that experience will have to wait.

It is amazing how fans are finally allowed to attend sporting events, but they must remember to follow necessary mandates and stay safe. Just because stadiums are reopening, it does not mean that the COVID-19 pandemic went away.