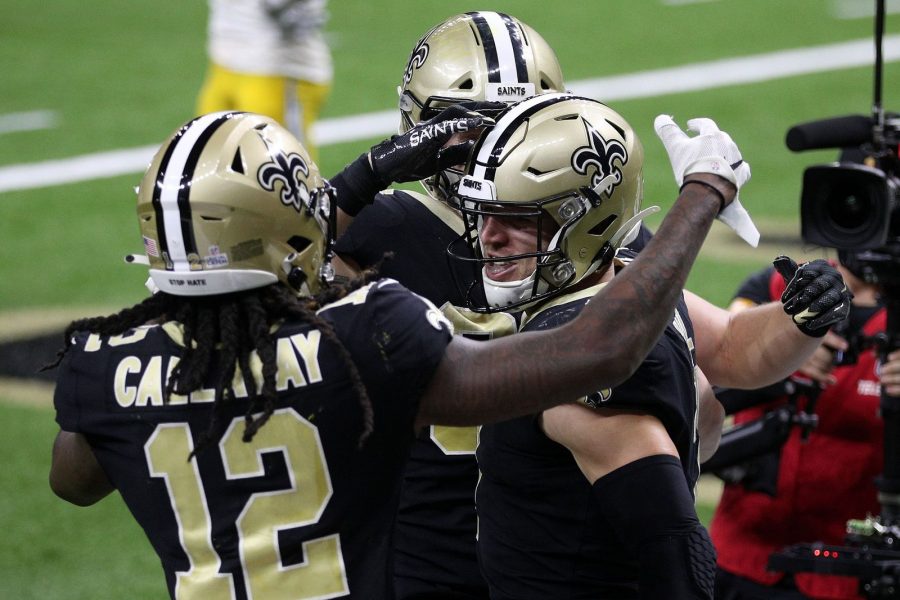 Taysom Hill #7 of the New Orleans Saints celebrates his nine-yard touchdown against the Los Angeles Chargers with Marquez Callaway #12 during their NFL game at Mercedes-Benz Superdome on Oct. 12, 2020 in New Orleans, Louisiana. The Saints won 30-27 in overtime. (Chris Graythen/Getty Images/TNS)

Taysom Hill #7 of the New Orleans Saints celebrates his nine-yard touchdown against the Los Angeles Chargers with Marquez Callaway #12 during their NFL game at Mercedes-Benz Superdome on Oct. 12, 2020, in New Orleans, Louisiana. The Saints won 30-27 in overtime. (Photo courtesy of Chris Graythen/Getty Images/TNS)

In March, all major sports leagues were forced to cancel their seasons due to concerns about the COVID-19 pandemic. Football fans everywhere questioned if and when the NFL season would start again.

Now, in October, it is preparing for a Monday night matchup between the Los Angeles Chargers and the New Orleans Saints in week 5. While attempting to resume their season, the NFL may run into several issues regarding safety.

The Tennessee Titans, for instance, have had 23 positive COVID-19 tests between players and coaches, forcing the team to shut down their practice facility. Not only have the Titans tested positive, but other players around the league have as well, including defensive player of the year Stephon Gilmore and quarterback Cameron Newton of the New England Patriots.

The NFL has enforced strict rules involving COVID-19 protocols, and any player or coach who tests positive must quarantine for 14 days.

“I am a big [New England Patriots] fan and I really hope that they will keep playing,” Marjory Stoneman Douglas High School freshman Jonah Stractman said.

The NFL is contemplating adding an extra week to the season to make up for games that were postponed. Last week, the matchup between the Tennessee Titans and the Pittsburgh Steelers was postponed until further notice, resulting in each team having a week off. The New England Patriots and the Denver Broncos were scheduled to play week 5, but this game also got postponed due to three players testing positive for the coronavirus.

While the season is in question, many teams have been protecting themselves from the virus by wearing masks on the sidelines at all times and staying away from all group meetings with more than five people. 28 teams have not had any cases yet and fans hope that they can keep it up.