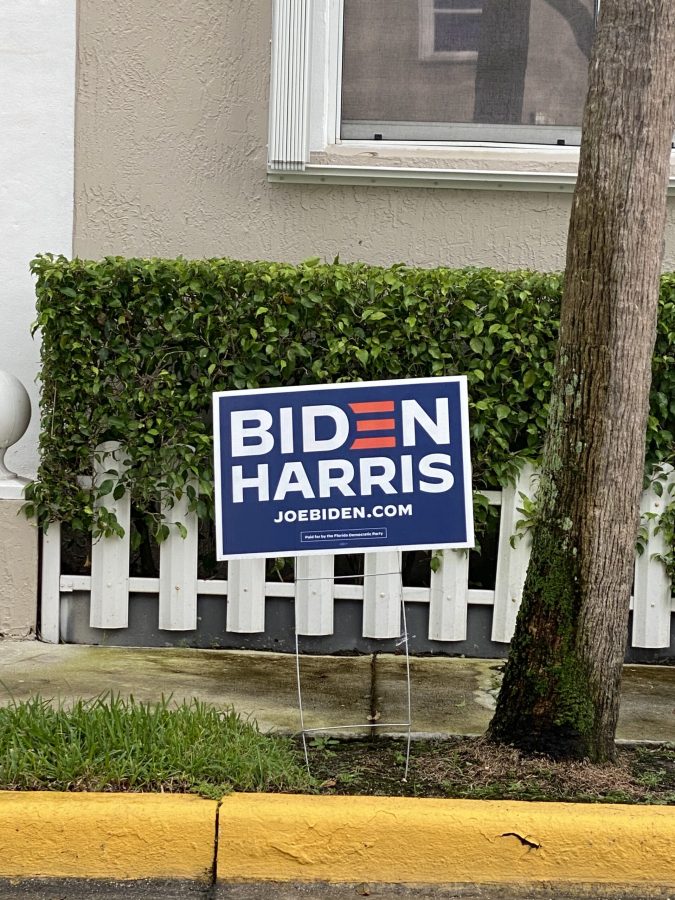 Some show their political views by using yard signs like this one that clearly voice their support for Joe Biden and Kamala Harris.

Some individuals show their political views by using yard signs like the one above to clearly voice their support for Joe Biden and Kamala Harris. Photo by Cassidy Tarr

Throughout this election season, former Vice President Joe Biden has proven to be quite a controversial presidential candidate. From the announcement of his campaign to the most recent presidential debate, voters have had varying opinions on whether or not Biden is a good candidate.

One of the loudest groups during this time has been Gen Z, or more specifically high-school students. Both high schoolers and college-aged students have been very vocal on social media apps, like TikTok and Twitter, and popularized self-made campaigns such as “Settle for Biden” or “Dump Trump.”

Some left-leaning students from Marjory Stoneman Douglas High School seem to have made up their minds on Biden as well. They, of course, all have their individual beliefs, but quite a few of them seem to have similar general opinions on this election’s candidate.

“I think that him being the Democratic candidate is more of people [of the left-wing] being fed up with Trump than actually supporting Biden,” sophomore Damian Francis said. “He’s in no way a particularly apt candidate and it’s really a deal of the lesser of two evils.”

Biden’s campaign may have some parts that are more center or right-leaning, but some left-leaning students are so fearful of Trump being in office that they are willing to vote for anyone who is remotely better.

For a certain group of left leaning students, Biden is a choice to settle on, someone that isn’t necessarily beneficial, but is relatively capable and wouldn’t cause too many problems.

After interviewing an individual from each grade, many left-wing students have echoed similar opinions on Joe Biden as a whole, with varying ideas on whether people should be voting for him this year.

“I would advise students to settle for Biden. Although he isn’t the candidate many of us wanted to represent, he’s a lesser evil,” junior John McGuire said.

It has become evident that students are not pleased about having to choose between Joe Biden and Donald Trump. Even students from schools across the country are having conflicting feelings about whether or not settling for a candidate is smart according to the McKendree Review, a student paper from Illinois.

“I feel like voting would just be choosing the lesser of two evils and that picking either man would result in someone misrepresenting what I believe this country stands for,” one student said in regards to her concerns about Biden.

The terms “Settle for Biden” or “lesser of two evils” suggest that this is a choice between which candidate would prove to be less destructive.

In contrast to what some students have been saying, other teenagers feel that it would be a safer choice to either not vote for Biden or to not vote at all.

According to Duke Today, only 43 percent of people aged 18-20 voted in the 2016 presidential election. Young adults tend to be more particular when casting their vote, so it’s likely that quite a few students would choose to hold their votes until they notice a potential leader.

These students view the possibility of Trump being president for another four years as much worse than electing a candidate who is possibly not able-bodied enough to lead. Biden may not be much, but many left-leaning students see him as a less grim future than the future that would come with Trump in office.

“If Trump gets re-elected, I’ll have fully lost hope for this country, ” McGuire said.

Although this seems to represent the general consensus of students’ opinions on Joe Biden as the Democratic nominee, this of course isn’t exact. Left-leaning students’ opinions about who Biden is and whether he is capable or not vary greatly.