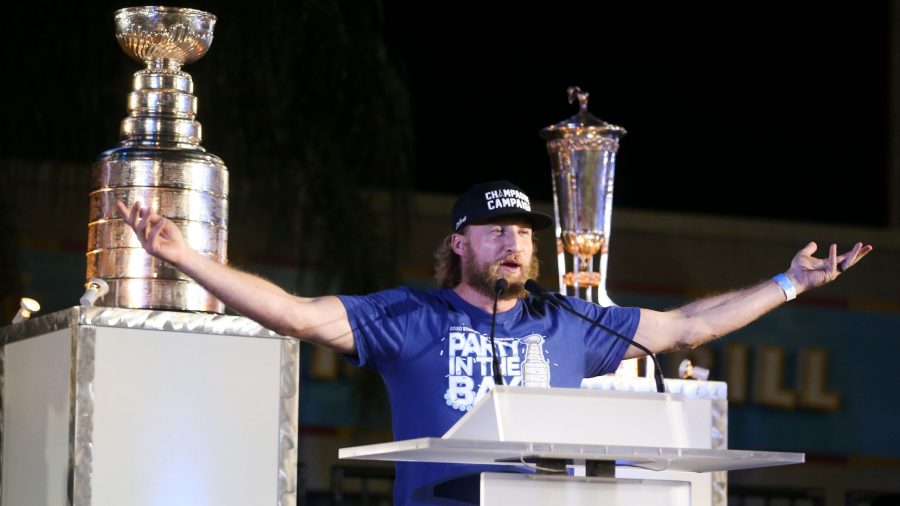 On Monday, Sept. 28, the Tampa Bay Lightning defeated the Dallas Stars with a score of 2-0 in Game 6. This earned the team’s second Stanley Cup in their 28-year history, winning the series 4-2.

Tampa Bay’s Andrei Vasielevskiy (88), Victor Hedman (77), Brayden Point (21), Nikita Kucherov (86) and an injured Steven Stamkos (91) led the team to victory. The team went 16-6 in the entire playoffs. This means that they won 16 out of 16 games, but lost six in the process of the gauntlet hockey that fans call the Stanley Cup Playoffs.

The Conn Smythe Trophy was given to the MVP of the playoffs, Victor Hedman, over fan-favorite player Brayden Point. Hedman had a 10-12-22 stat line, edging out Point’s 14-19-33 stat line by one first-place vote. Many fans believed that Point should have won, but the voters through NHL insiders and analysts across the entire NHL thought Hedman had a better case.

“I thought the Stars would win and I [believe] Brayden Point deserved the Conn Smythe Trophy over Victor Hedman,” Marjory Stoneman Douglas High School sophomore Dylan Gretzinger said. “Beforehand, I thought the Islanders would win and no Hedman did not deserve it,” freshman Luke Colton said.

The Tampa Bay Lightning coming into the “NHL Bubble” had a record of 43-21-6, which ranked them second in the Atlantic Division and the Eastern Conference, only behind in the standings by the Boston Bruins. The Lightning beat the Bruins in round 2 of the playoffs this season.

On Oct. 6 through Oct. 7, the 2020 NHL Draft was held virtually via the NHL Network studios in Secaucus, New Jersey. The New York Rangers had the first overall pick and projected or predicted it on all mock drafts, to select Alexis Lafrenière, unless they traded the pick.

Florida Panther forwards Dadonov and Hoffman had almost half of the Panther’s goals last season, but both players have not made their final decisions as to where they want to go. However, rumors on NHL Instagram accounts PuckEmpire and RealPuckZone have suggested they have circled back to the Panthers. Others have gone to other teams as well like Pietrangelo, Hall and Brodie in this Free Agent Frenzy.

Notable goaltenders who are free agents and are signing in other places include recently bought out and former New York Rangers goaltender Henrik Lundqvist (30), Washington Capitals starter Braden Holtby (70) and Vancouver Canucks starter Jacob Markstrom (25). Holtby, who had a 3.11 GAA (goals-against average) and a .897 save percentage in 48 games for the Caps last season, signed with the Vancouver Canucks. Markstrom signed with the Flames after having a 2.75 GAA and a .918 save percentage in 43 games with the Nucks. Henrik Lundqvist signed with the rival Washington Capitals after a .905 save percentage and a 3.16 GAA in 30 games for the Rangers. Dallas Stars playoff hero, Anton Khudobin (35), resigned after putting up .930 save percentage and an even 2.22 GAA in 30 games with the Stars.

After all the ups and downs including a targeted Jan. 1, 2021 season start date, it has been over a year since NHL fans were making their pre-season predictions. Now, fans are waiting for the season to start.