L.A. Dodgers and Tampa Bay Rays face off in the World Series 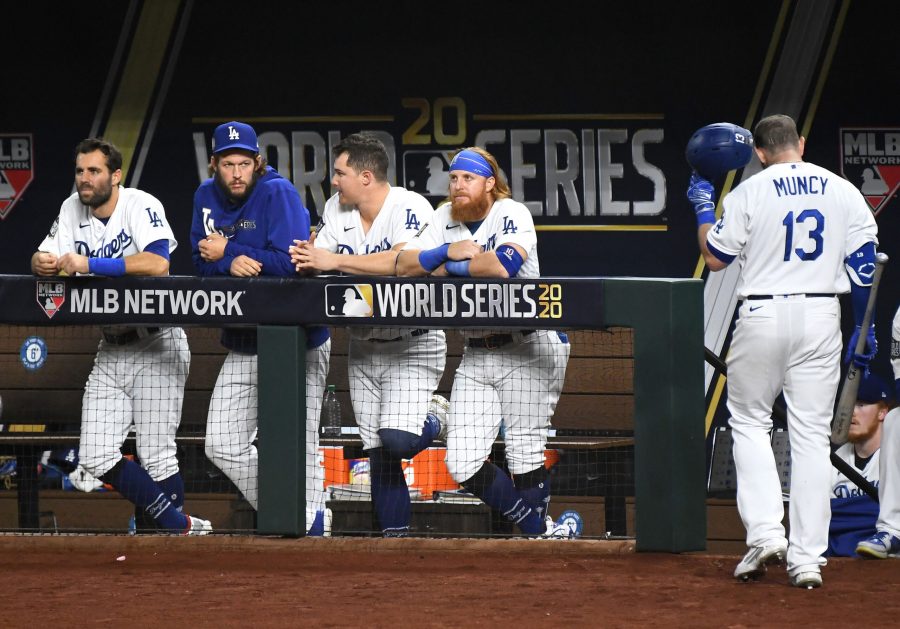 The Los Angeles Dodgers' Max Muncy (13) walks back to the dugout after striking out against the Tampa Bay Rays in the fourth inning as teammates, from left, Chris Taylor, Clayton Kershaw, Joc Pederson and Justin Turner, look on against the Tampa Bay Rays in Game 2 of the World Series at Globe Life Field in Arlington, Texas, on Wednesday, Oct. 21, 2020. The Rays won, 6-4, to even the series. (Wally Skalij/Los Angeles Times/TNS)

For the first time since 2013, the two best teams of the National and American Baseball League are facing off against each other for the World Championship.

The World Series is where the two champions of their respective league play a best of seven series in order to win the title of World Champions. Everything from their season doesn’t matter anymore, the whole season comes down to the last seven games. This year, the Los Angeles Dodgers look to win their seventh championship in franchise history, while the Tampa Bay Rays look to win their first World Series.

The Los Angeles Dodgers’ Max Muncy (13) walks back to the dugout after striking out against the Tampa Bay Rays in the fourth inning as teammates, from left, Chris Taylor, Clayton Kershaw, Joc Pederson and Justin Turner, look on against the Tampa Bay Rays in Game 2 of the World Series at Globe Life Field in Arlington, Texas, on Wednesday, Oct. 21, 2020. The Rays won, 6-4, to even the series. (Photo courtesy of Wally Skalij/Los Angeles Times/TNS)

The Los Angeles Dodgers will be playing as the National League (NL) team in the World Series for 2020. The team is built around a core of drafted young stars and supplemented with trade acquisitions such as outfielder Mookie Betts and shortstop Chris Taylor. Additionally, free-agent signings with the massive budget given to them because of their location and owners have allowed the Dodgers to be a scary combination of both money and analytics.

After overcoming a 3-1 deficit in the National League Championship Series, the Dodgers are blazing coming into the series, joining a group of only five other teams to do so in the 2000s. This shows they have fought to overcome obstacles, regroup and come back as a team, which is something you may need in the World Series if you are down early.

“I feel like the Dodgers have been stronger throughout the postseason than the Rays,” Marjory Stoneman Douglas High School freshman Jayden Dubanewicz said.

The L.A. Dodgers’ offense is led by 2018 AL MVP outfielder Mookie Betts and 2019 NL MVP outfielder Cody Bellinger, along with 2016 Rookie Of The Year shortstop Corey Seager and other All-Star talents to make their lineup one of the most potent in the league.

The L.A. Dodgers starting pitching staff is not a weak point by any means for this team. Electrifying young stars such as Walker Buehler, Dustin May and Tony Gonsolin reinforce future Hall of Fame star Clayton Kershaw. A key to winning this series for the Dodgers will be for their starting pitchers to go deep into games and keep the stress off of the bullpen.

After being in the World Series for three of the last four years, the L.A. Dodgers have had the experience to play in the high stakes games. Although they haven’t won in those past years, a huge part of the World Series is overcoming the nerves that come with playing in such an important event.

“The Dodgers will win even if I don’t want them to because they have had many years of experience in the World Series,” sophomore and MSD Junior Varsity Baseball shortstop Matthew Barret said.

The Tampa Bay Rays’ Brandon Lowe celebrates one of his two home runs against the Los Angeles Dodgers in Game 2 of the World Series at Globe Life Field in Arlington, Texas, on Wednesday, Oct. 21, 2020. The Rays won, 6-4, to even the series. (Photo courtesy of Wally Skalij/Los Angeles Times/TNS)

The offense is not like that of the Dodgers. While the Dodgers’ feature superstars are nationally known, the Rays don’t have as many that stand out. Instead, they have a balanced lineup of quality players that play very well together. Although they don’t have many nationally known stars, they are led by All-Star caliber players like outfielder Austin Meadows and second baseman Brandon Lowe.

The starting rotation is another strong part of this team that can stand up with the Dodgers rotation. Led by 2018 AL Cy Young winner (an award given to the best pitcher in the American League) Blake Snell, 2x All-Star Charlie Morton and electrifying young pitcher Tyler Glasnow. In addition, their last starter is Ryan Yarabrogh, who doesn’t have the accolades like the other three but is still an above-average pitcher who can get the job done.

The clear strength of the Rays is their bullpen. Their bullpen is talented from top to bottom with names like Nick Anderson, Diego Castillo, Pete Fairbanks, John Curtiss, Ryan Thomson, Aaron Slegers and Aaron Loup. Their bullpen ranked 4th in the MLB entering the season according to the MLB’s official website. For the Rays to win, they are going to need the starting rotation to keep it close and for the bullpen to have success.

If the Rays are going to make it to the World Series, their hits and pitches are going to have to do well enough to keep up their top of the league performance.

This regular season, their success came from their starters going far enough in the games, their offense working together to score enough runs and their elite bullpen closing the game out. If the Rays are going to win the series, their pitching staff will be the key.

“One of their keys to winning the World Series is that they need to have timely hitting and great pitching,” freshman Alex Rodriguez said.

If the Rays win the World Series, it will be the first win in their history and a massive milestone for the team and their fans.