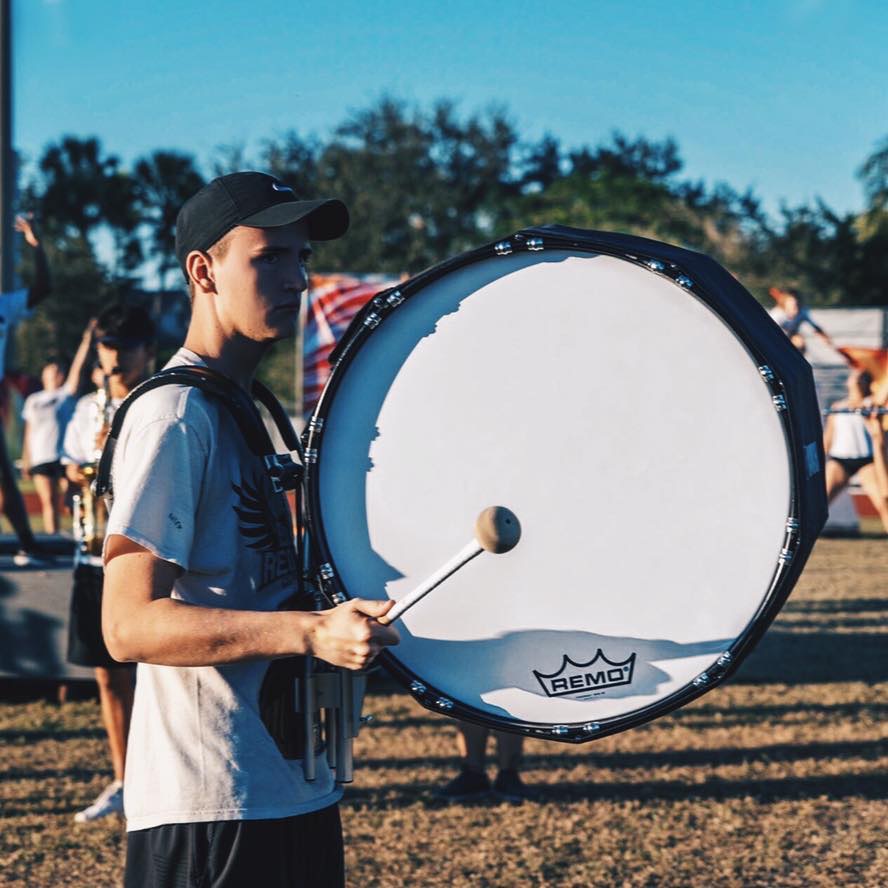 Senior Nicholas Hernandez has been a member of the Eagle Regiment since his sophomore year of high school as part of the percussion, playing bass drum in the drumline.

“Seeing a lot of my friends march and be involved in something with the school motivated me to participate and try something new,” Hernandez said.

Hernandez is a student in the percussion class at Marjory Stoneman Douglas High School. Along with this, he typically attends rehearsals two to three times per week; sometimes more if a competition or performance is approaching.

As a member of the Eagle Regiment, Hernandez has made countless friends and unforgettable memories.

“The highlight of marching band is being able to attend and perform at special events with some of your best friends, including Walt Disney World and the Super Bowl,” Hernandez said.

Not only does he participate in the marching band, but also the winter percussion season, which takes place later in the year. They perform a uniquely designed show to hundreds of competitors from several other Florida high school percussion groups.

Along with being a member of the Eagle Regiment, Hernandez is an employee at Dunkin Donuts, working primarily on the weekends. Also, he is an officer for the TV & Film Club at MSD.

Since he is a member of a rigorous band program, an officer and a hardworking employee, Hernandez has to manage his time wisely in order f to complete everything he needs to get done, whether it is practice, homework or relaxation.

“Prioritizing your schedule and knowing when you have time to complete your coursework is incredibly important, Hernandez said. “As long as you don’t blow off your work and know when to get your stuff done, balancing the two won’t be a problem.”

Unfortunately due to the ongoing COVID-19 pandemic, Hernandez’s senior marching season was moved to online rehearsal; however, his winter season is set to take place, with the proper precautions.

“The bonds I’ve made during my time in my high school band program are so important to me, and I will cherish them forever,” Hernandez said.

He is truly a dedicated and hardworking student in his final year of high school. His past performances can be found on YouTube.