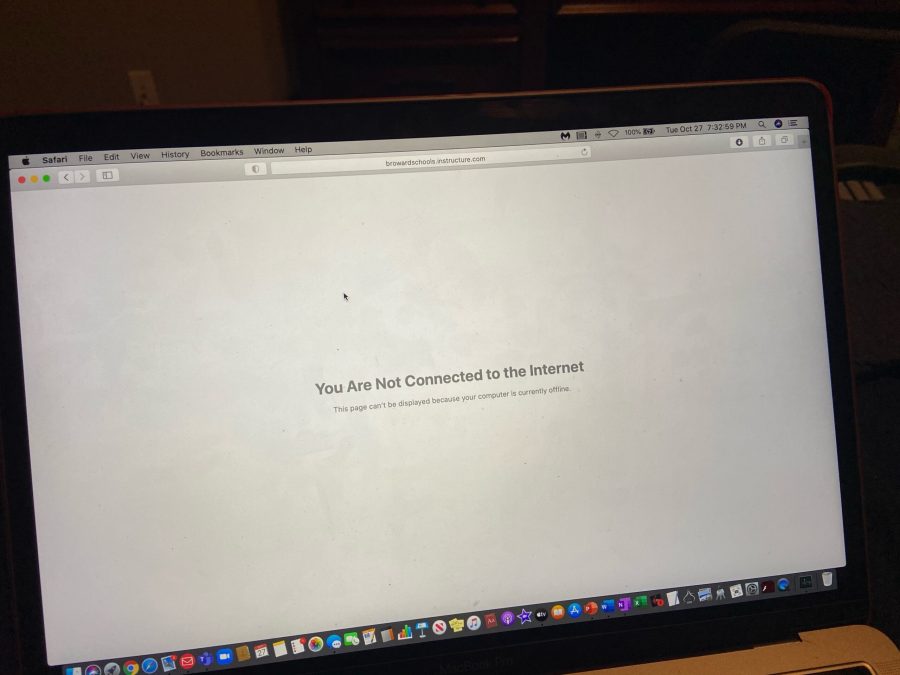 On Tuesday, Oct. 27, students and staff at MSD had difficulty with their WiFi due to internet connection issues at school. Photo by Matthew Rosenthal

On Tuesday, Oct. 27, students and teachers at Marjory Stoneman Douglas High School experienced a problem with the school’s WiFi, and this has not been the first time. At 6:45 a.m., around the time teachers started to arrive at school, the WiFi was not working. This prompted the school to send out Remind messages notifying the student body that teachers would be unable to start their meetings on time. This same issue occurred on Friday, Oct. 23 as well.

Based on the effects of COVID-19, Broward County Public Schools gave students the option to return to school or remain at home. Either way, school is still conducted virtually through Microsoft Teams.

“Everything was put on hold, but I used Remind to communicate with my students,” English teacher Andrea Kowalski-Rospierski said.

Although some students are returning to physical school for a sense of normalcy, they are not being taught the way they remember. While some students believe that it is necessary for all students to return to in-person schooling, others strongly disagree.

“[These technical issues are] why students should be back in school fully in person,” sophomore LJ Rusinoff said. “A problem like this could’ve been easily avoided with more students off the computers.”

Both teachers and students alike were frustrated after they were notified. In the middle of first period, the WiFi came back on for just a few minutes, which threw teachers for a loop. This allowed the teachers to start their teaching and lesson plans, which was once more put on hold by the WiFi going out for a second time. At that time, many teachers were unaware of what to do because, by the time they had internet connection again, it was too late into the class to restart the lesson.

“I was scheduled to play a mandatory training video during my study hall [in first period] this morning and it’s a time-sensitive requirement,” English teacher Kristen Coniff said. “The WiFi crash made that nearly impossible though.”

According to many teachers, MSD handled the problem as best as they could. Because the WiFi crash was a problem out of their control, they did the things that they did have control of. MSD administration sent out messages and notifications to all the teachers and students, addressing the problem. MSD took the same actions on Oct. 23 when the same issue occurred for the first time.

“I believe the school handled it as well as could be expected. They kept teachers and students informed via Remind and announcements about the interruptions and when they were rectified,” AP World History teacher Devin Schaller said.

“I had to connect to my personal hotspot and present the training video with a very poor connection. It did the job, but not without some difficulty,” Coniff said.

Other teachers had to figure out other solutions, like assigning work to do while the internet situation was being handled.

“I dealt with the problem by sending students a link for the day through Remind for them to review and complete until the WiFi came back on,” Schaller said.

This problem was eventually dealt with and no other problems relating to the internet connection resurfaced during the school day. As the year progresses, we will keep an eye on whether or not the WiFi will hold up for the amount of students and staff using the internet.