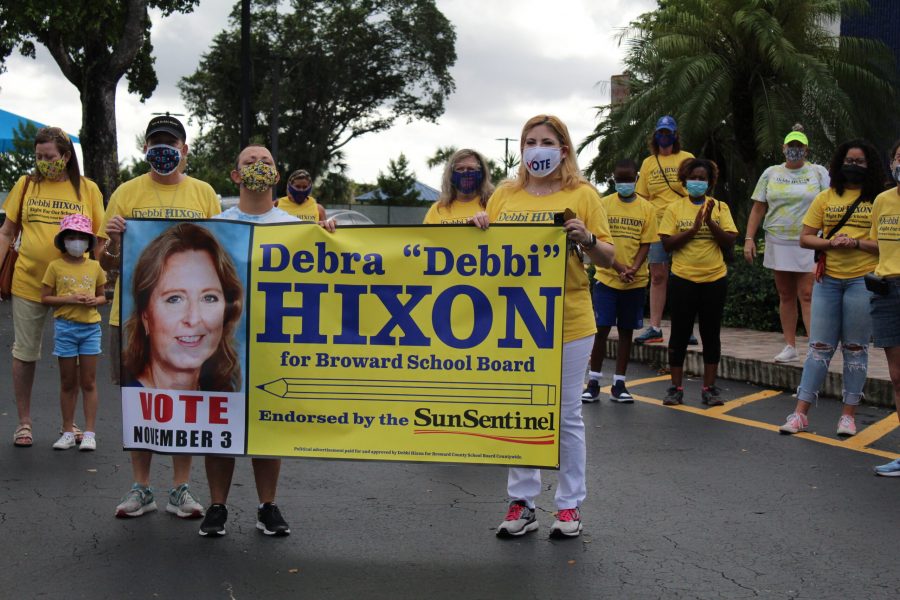 As the calendar nears Nov. 3, Broward County residents will choose between two candidates–Debbi Hixon and Jeff Holness–in a runoff election for School Board of Broward County District 9 seat.

The winner will replace Robin Bartleman in an at-large seat that represents the entire county. Bartleman is running for Florida House of Representatives District 104 seat, which represents Weston, Florida.

In the August primary, Hixon received 41.72% of the vote in a race against four other candidates. In order to win the seat outright, a candidate must receive 51% of the vote. If no candidate achieves that vote threshold, a runoff election is held between the two candidates with the greatest percentage of the votes. Holness received 25.95% of the vote, which was the second highest total behind Hixon’s 41.72%.

Both Hixon and Holness have similar platforms. Both candidates want to prioritize school safety and security, learning for special needs students and mental health resources for students.

In a normal election cycle, candidates would hold many in-person events and try to make personal connections with voters.  Campaigning during this election cycle has presented unprecedented challenges as a result of the COVID-19 pandemic.

For Hixon, raising funds for her campaign during this time of financial hardship and uncertainty has been particularly difficult.

“It’s much harder to ask people to support you financially because people have lost their jobs or their businesses are so uncertain,” Hixon said.

A staple in this election is the increased use of technology in campaigning. With virtual town halls, community members are able to ask candidates, like Hixon, questions and connect with them remotely from the comfort of their home.

“With the use of technology, I think that voters in this election have a much greater chance of being educated about the candidates than they would have normally,” Hixon said.

Hixon has found socially distanced ways to campaign across Broward County. Each Saturday, Hixon and members of the Broward Teachers Union go door-to-door in different parts of the county, leaving campaign door hangers on every residence.

Hixon is the widow of Chris Hixon, the former athletic director that was murdered in the shooting at Marjory Stoneman Douglas High School on Feb. 14, 2018. Although her late husband has a role in empowering her to run for the school board, Hixon is not running solely because of her loss.

“It’s important for people to understand that I didn’t just get into this race because I was impacted by the MSD shooting,” Hixon said. “I got into it because I love the Broward County Schools System. I love the students; I love the teachers and the staff, and I just want the opportunity to make things better.”

Hixon is opposed to arming teachers as a school safety solution. She does not believe that an educator’s job description should entail carrying a weapon.

“Chris was a security person; he was a military police officer… and to be quite honest if he would’ve been armed that day, we would have a completely different conversation,” Hixon said. “But I’m a teacher, and I know that I would never want the responsibility… that’s not fair to students or to teachers. If you’re carrying a weapon, that should be what your focus is.”

Hixon’s campaign is not exclusively focused on school safety. She is clear that she wants to focus on the everyday problems in education as well. As an educator herself, she has experience with the inner workings of schools and what it is like to deal with building problems like mold, fights between students, etc.

“When we talk about safety… we have to look under that big umbrella,” Hixon said. “I think that’s what makes me unique to other candidates is that I am in the system. I’m invested. I’m dedicated.”

Budgeting is a hot topic in this race, especially concerning the $800 million bond-funded renovations, which are way behind schedule and over budget. Hixon offers a different perspective than most on this issue.

“A lot of the problems that are happening in the bond issue have to do with management,” Hixon said. “Those are things that are preventable. We tend to be reactive and not proactive. I hope I will bring a change of mindset in that area.”

Hixon feels that winning this race would give her an opportunity to help a community that supported her through dealing with the loss of her husband, believing that it was a true example of “love trumps hate.”

“It’s Chris and I doing this together; I feel him pushing me through,” Hixon said. “I’m just excited for the opportunity to be the voice for everyone in the county, to make a difference… and what’s more important than the education of our children? That’s how we make things better.”

Hixon encourages everyone in Broward County who is eligible to vote to make their voices heard in this election. Early voting for Broward County began on Monday, Oct. 19. The last day to vote is Nov. 3.