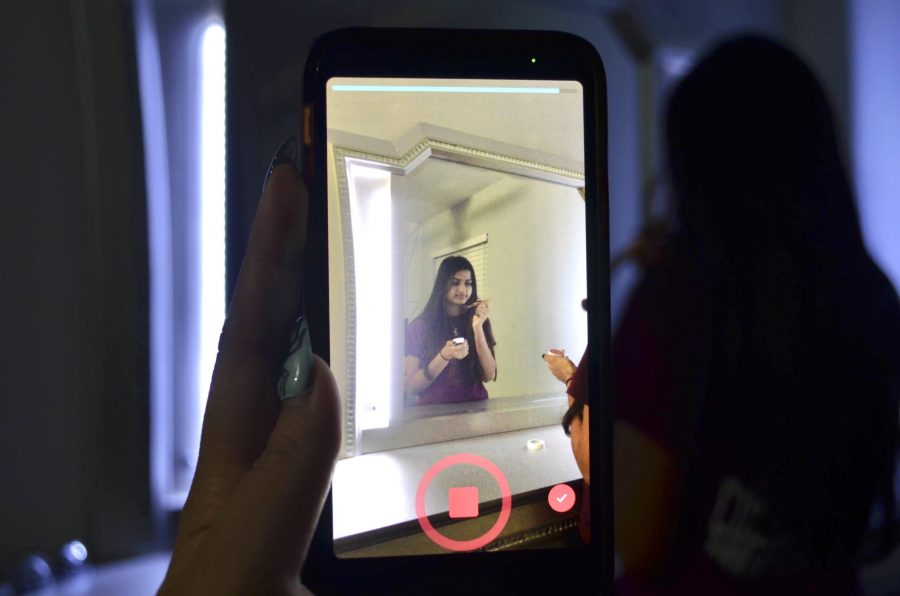 You’re at a social gathering with a group of people you know nothing about. Just when you thought it could not get worse; it does. Suddenly, someone walks up to you. You scramble to decide whether you want to prepare for this social interaction or pretend you did not see the other party and continue mindlessly scrolling through your cell phone. As they approach you, they ask for your name and introduce themselves. After the basic exchange of small talk, the room goes quiet and in fear of further awkwardness, you pop the question, “So, do you watch TikTok?” A statement that has proven itself as a successful ice breaker that could reveal one’s favorite pastime.

“My favorite TikTok trends are definitely POV TikToks,” sophomore Grace Cavaretta said. “They are so entertaining to watch, and I feel like I am watching a show on Netflix.”

Some dance videos include dances to popular songs that are now deemed associated with TikTok. For example, songs like “Savage Love” by Jason Derulo, “Because of You” by Ne-Yo and “Like That” by Doja Cat have recently gained a lot of attention via TikTok dances. People discover these songs through dance challenges created or recreated by the top TikTok influencers, such as Charli D’Amelio, Addison Rae and other popular creators.

“I have a lot of respect for Charli D’Amelio and her dance skills. Not only is she a positive influencer, but she is definitely one of the best dancers on this app,” freshman Ashley LoFurno said. “Whenever I want to learn a dance, I always look at her account to learn them.”

Famous TikTok stars inspire young viewers, especially those who are considered to have the “hype.” When a TikTok creator has the hype, they are continuously featured on the “For You Page,” which is where all the most popular videos appear.

At first, D’Amelio had the hype, but now many people would consider Sienna Gomez to have the hype because her videos have recently blown up. Gomez advocates the importance of being authentic and having confidence in oneself. She reminds people that posing, angles and lighting affect the way people look, and is not afraid to show her true body.

“I think Sienna has a great influence on people who are more insecure about their bodies,” junior Gianna Squiccirini said. “There are so many girls on TikTok who resemble the ideal body type. I’m so glad there is finally an influencer who likes to show off her real body that isn’t ‘posed,’ as people do on Instagram or any other social media platform.”

New dances are always an up and coming trend and primarily gain attention once recreated by members of content houses. Content houses describe groups of young influencers who create content for TikTok while living in a mansion together. TikTok users tend to discover new and rising influencers by exploring members within different content houses. The most popular ones include the “Hype House,” “Sway House” and “Clubhouse.”

The eight influencers from “The House Nobody Asked For” post comedic content where they make light of the other content houses. Unlike many others, this house is diverse, with content creators of different genders, races and ethnicities.

“I really like ‘The House Nobody Asked For.’ I am happy with the diversity, and I’m glad it’s not a problematic house,”  junior Giselle Hansen said.“I think the purpose of it is a little dumb, but in all they’re a good house.”

In addition to prominent new dances, there have also been a couple trending new makeup challenges, including the “10 Seconds vs. 2 Hours of Makeup” challenge. In this trend, a TikTok user quickly applies makeup to their face in about 10 seconds, but then the video transitions to the same look, but after spending hours on their makeup. This trend is recorded to a cover of the song “Girl Put Your Records On” by TikTok user Ritt Momney.

One singing trend that has recently become popular is “Popcorn Duets,” which show two users singing every other lyric or syllable in a song. This is a difficult challenge that allows people on TikTok to test their musical abilities. The first TikTok user to start Popcorn Duets was the TikTok user “stupidsri,” who sang “Halo” by Beyonce.

An acting trend that has been popular for a while now on TikTok are Point Of View challenges. POVs allow people to play any role from any viewpoint, including dramatic and comedic roles, to entertain their viewers.

Recently, TikTok users have been seeing a lot of these types of videos on “Draco TikTok.” Draco Malfoy is a character in the Harry Potter series played by actor Tom Felton, and is a fictional individual that users have recently become obsessed with. People create videos where they edit themselves talking to Draco, as if they were in the Harry Potter series themselves.

“I remember taking the Pottermore quiz because my friends wanted to know my house, but I never really got into it so I didn’t really know what that meant. However, getting on Harry Potter TikTok changed that very fast,” junior Camila Fraser said. “I’m not entirely sure how it happened, but all I know is that one second I couldn’t care less about it, and now I’m in the middle of watching all the movies and surfing the web to see where I can find a Slytherin robe.”

TikTok is a favored creative outlet that singlehandedly creates and houses trends that make their way across all social media platforms, allowing users to be more experimental with their content.