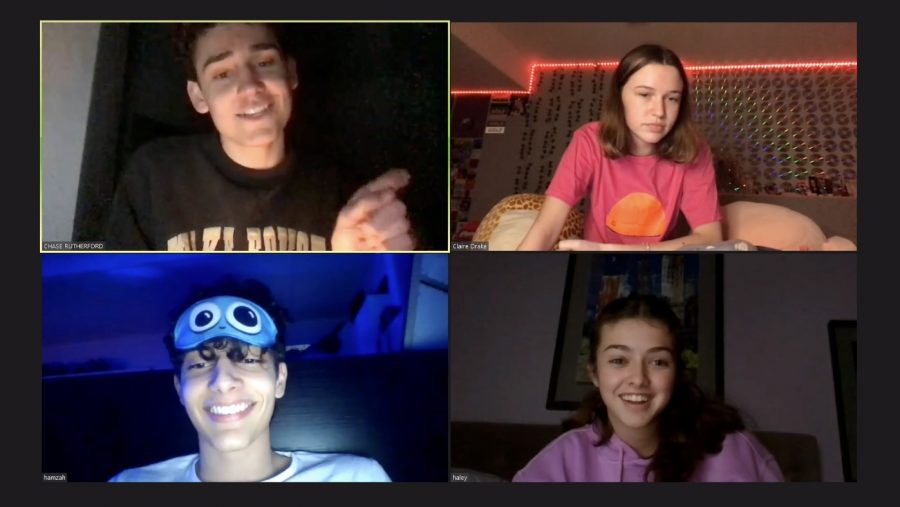 The “4freakshow” is a live stream broadcasted on the app Twitch, which consists of TikTok stars Haley Sharpe, Chase Rutherford, Claire Drake and HamzahTheFantastic.

They mainly use Zoom to communicate with one another, which is very convenient considering they all live in different states and Hamzah lives in Canada. The platform that these Zoom calls broadcast to is Twitch, which is a video live streaming service that can be used to stream video gaming, cooking or chatting.

“4freakshow” aired their first stream on Thursday, July 9, with a total of 1,046 viewers. They have greatly increased their audience since the first stream. Their most recent stream hit a total of 262.8k viewers on Sunday, Oct. 25.

While live streaming, the four teenagers do fun activities, like show and tell, sleepovers, talent shows and mukbangs. During their stream on Oct. 19, they had a sleepover where they did pillow fights, truth or dare and facemasks. TikTok stars Charli D’Amelio, Noah Miller and Vinnie Hacker have also made guest appearances on their channel.

At the end of every stream, the teenagers will leave unexpectedly and the “hackers,” played by Hayley Sharpe, Chase Rutherdorf, Claire  Drake and HamzahTheFantastic, come up on the screen to communicate their plans about ruining the show. The hackers are introduced in hoods with red LED lights in the background. These hackers serve as the alternate personalities of the four influencers.

Although these teenagers seem to be casually talking through a Zoom call, their fans get a kick out of the hilarious scenes they have prepared. Some people would consider “4freakshow” as the “SNL” of Generation Z, more popularly known as Gen Z.

Gen Z is the primary audience due to their similar sense of humor with the group. Teenagers have even begun to mimic the group in casual conversations. For instance, they may use the iconic “Chase laugh” or the “Claire Drake face” throughout a random conversation. The increased number of people mimicking “4freakshow” intrigues others and encourages them to watch the next stream.

It’s hilarious seeing the four individuals put on acts for their viewers, especially when they begin to laugh too when they break character. The instantaneous laughter causes the TikTok stars to move out of the frame on multiple occasions. Rutherford is excellent at staying in character, but when he breaks character, it is very amusing.

Since they have a script prepared for every stream, when something unexpected happens, the audience always makes a huge meme out of it. For instance, during the stream on Friday, Aug. 14, Haley Sharpe’s wig accidentally fell off causing the whole group to laugh hysterically, unable to hold their composure. As a result, “4freakshow” fan pages began to create memes out of this incident.

TikTok has made a huge impact on the group’s streams since it started off on that platform. Their TikTok account “4freakshow” currently has 866.2k followers and the four teenagers always post content from their Zoom calls on it.

Along with content coming from the “4freakshow” official account, fan accounts on TikTok like “4freakshow4” post clips from their streams as well. These short clips are a huge attention grabber for young teens just casually scrolling through TikTok.

After a long day of doing homework, it’s nice to be able to watch the streams and laugh at their hilarious jokes. This group of teenagers is absolutely hysterical, and they never fail to put a smile on your face.

“4freakshow” has hit their peak on the internet and plans to continue with their live streams. People are able to discover when 4freakshow’s next stream will be on Twitch by visiting their TikTok account @4freakshow.