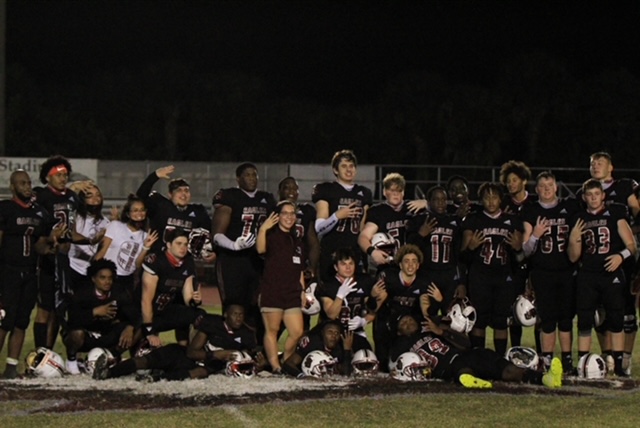 The Eagles gather on the 50-yard line after the game to celebrate their victory. Photo courtesy of Kelsie Yon

The Eagles gather on the 50-yard line after the game to celebrate their victory. Photo by Kelsie Yon

On Thursday, Nov. 5 at 6:30 p.m., the Marjory Stoneman Douglas High School varsity football team faced the Coral Glades Jaguars. The game was held at Cumber Stadium and was the first home game of the season for the Eagles.

Tuesday’s game was particularly special, being that it was Senior Night for MSD. The team has 24 seniors, all with high hopes for their final season with the football program. Although the 2020-2021 school year was not ideal for the seniors, they were glad they had the opportunity to play one last football season before graduating.

To begin, the Eagles received the kickoff and obtained the first drive of the game. They had a slow start and were down by three points in the first quarter.

An interception thrown by quarterback Matt O’Dowd (4) seemed to further slow down the Eagles as the Jaguars had several opportunities to score.

However, they struck momentum towards the end of the first half, scoring two touchdowns, one by senior running back Derek Geffard (1) and another a few minutes later by wide receiver Christian Spencer (14). This gave the Eagles a 14-3 lead at halftime.

RB Derek Geffard (1) rushes into the endzone for another Eagles touchdown. Geffard’s touchdown helped the Eagles push past early struggles and get on the scoreboard. Gif courtesy of David Lopez

In the second half, the Eagles continued to play strong, holding the Jaguars to no points while scoring twice themselves.

Starting running back AJ Darring (26) was forced out of the game before halftime with an injury, leading to senior RB Chris Darius (5) to enter the game. Darius became a major factor by making several long rushes and scoring a touchdown in the second half.

The third quarter included a touchdown by Darius, extending the Eagles’ lead to 21-3.

RB Chris Darius (5) completes a long run for a touchdown. Darius’ touchdown was one of his many contributions to the Eagles’ win. Gif courtesy of David Lopez

“I did what I was supposed to do,” Darius said. “I’ve been looking forward to being able to execute on the field, and that’s what I did tonight. I’ve been doing it for my team. The better I play, the better the team is.”

Then, in the fourth quarter, the Eagles maintained their dominance with wide receiver  Hervin Louis (3) catching a touchdown to increase the Eagles’ lead to 28-3.

A completion to WR Hervin Louis in the endzone rounds off the Eagles victory. Louis’ touchdown gave the Eagles a 25 point lead and guaranteed a win in the Eagle’s second game. Gif courtesy of David Lopez

Throughout the second half, defensive linemen Nick Dobbs (99) was a powerful presence on defense with several tackles, forcing the Jaguars to lose yards and keeping them away from the Eagles side of the field. Once again, several players on defense had impressive displays, which kept the Eagles to only allow nine points in their first two games.

“Our coach always says a lineman, against all odds, goes through the game-plan and is confident in their assignments. They [coaches] are going to put us in the right position for plays, you just have to go out there and execute,” Dobbs said.

“Executing” seemed to be the primary focus for the Eagles, as their ability to do so allowed them to preside throughout the game. 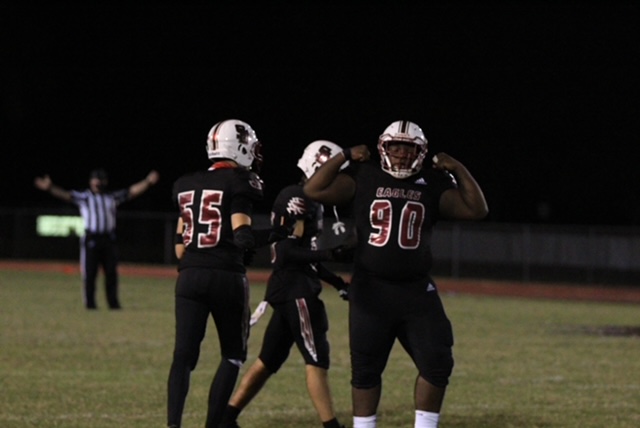 DL Josh Frais (90) flexes after making a crucial defensive stop for the Eagles. Defense played a large role in the Eagles’ matchup against Coral Glades. Photo courtesy of Kelsie Yon

The score of 28-3 was held until the end of the game, leading to a crucial Eagles victory on Senior Night.