[Opinion] Alarmism in the media is harmful to understanding issues 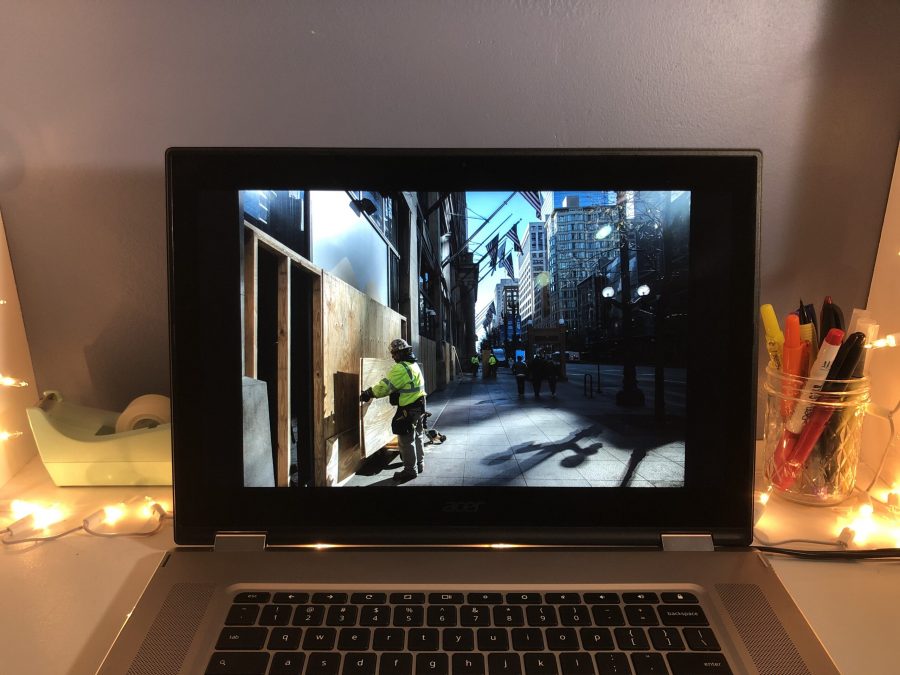 Digital unrest. Warmly lit, a laptop shows a civil worker boarding up building walls. Due to reports of political uncertainty, citizens and workers are driven to prepare for potential violence breaking out after the presidential election. Photo taken by Nya Owusu-Afriyie.

When life around the neighborhood is pleasantly serene, the image of society captured on a phone and computer seems all the more removed from reality. Alarmism, or the excessive exaggeration of an issue’s importance, intensifies this feeling of surreal horror and confusion, as reports of doom, crisis and the end of all things good seem like a cruel joke to my domestic happiness.

Alarmism in the media is harmful to understanding the issues impacting our society. It leads to the growth of polarized opinions that further alienate contentious audiences and the spread of inauthentic, inaccurate or misrepresentative information and communication through the media.  This culminates in communities’ inability to actively address the issue.

One issue impacted by alarmism is climate change. Writing on the impact of The Limits to Growth, a prominent book published in 1972, Bjørn Lomborg details that “the problematic legacy of The Limits to Growth is not just the unnecessary recycling of paper and a fascination with organic produce. More generally, the book and its epigones have promulgated worst-case environmental-disaster scenarios that make rational policy-making difficult.”

In his journal article, “Environmental Alarmism, Then and Now,” Lomborg uses the unethical institution of policies such as the one-child mandate in China and forced sterilization in India to demonstrate that alarmism deters the development of action that is more realistically probable and morally sound, as The Limits to Growth claims that a drastic reformative effort can only meet scarily looming issues.

As seen in our environmental, political, and economical landscapes, alarmism contributes to polarization, or the division between opposing factions, as well as the growth in dedication to one’s point of view and unacceptance of others’ differing views.

Climate change’s broad relevance has prompted “nearly a century of research and data,” as stated by the article “Climate Change History”, endless focus in the media, and its complexity has brought about a variety of responses, from The Limits to Growth alarmism to complete denial of the issue.

Following a narrative of smoky skylines and plastic-choked oceans, the audience can respond with apathy towards the claims, due to the overwhelming build-up of anticipatory dread and the belief “that their actions will make no difference or are unimportant compared to those of others,” as stated by the report Psychology & Global Climate Change.

Without addressing the audience’s doubts about legitimacy or opposing perspectives, the media’s claims can prompt distrust and disbelief. If “many think of climate change risks (and thus of the benefits of mitigating them) as both considerably uncertain and as being mostly in the future and geographically distant,” as listed by the report Psychology & Global Climate Change, then spiels on the near tidings of doom climate change bring tends to be met by these audiences with rejection.

Finally, if they are able to connect to the audience with their rhetoric, the media may gain the audience’s devotion to their call for action and strengthen trust in their character. Other than in the support for environmental reform, this devotion can be seen in the widespread hysteria and persecution of witches across Europe and America from the 1400s to the 1700s.

The exaggeration of the issue’s magnitude and the strong stance taken by the media drives the differing audiences to react with greater devotion to their points of view. The division of the audience into opposing communities and their stronger adherence to their opinions in response to alarmism in the media drives their alienation or inability to reconcile.

According to “Explaining and Evaluating the Trends,” a research report analyzing the public opinion surrounding counterterrorism policies, Americans in the 1900s feared and believed that “domestic communists were connected to and agents of a vast, foreign-based conspiracy to topple America. Extravagant proclamations about the degree to which such ‘masters of deceit’ and ‘enemies from within’ presented a threat to the republic found a receptive audience.”

The rampant hysterical fear of communists during the Red Scares of the 1950s was politically manipulated to garner support for anti-communist officials’ and campaigns’ actions, which included the persecution of suspected communists and militarized efforts. This alarmism also resulted in the weakening of civil liberties, which is exemplified by the ruling of Dennis V. United States in 1951, which convicted 11 communists, and dismissed their constitutional rights due to their support of ideological causes and conspiracies that opposed the United States.

The research report also details how throughout history, alarmism has been used to secure military campaigns, as Americans are likely to support military actions continents away if they are convinced of the threat of terrorists to their livelihood and wellbeing.

Since they hold a biased conviction towards their claims, alarmism in the media simplifies the issue’s complexity. The media and audience both favor the evidence that supports their objective and narrative and dismisses opposing perspectives that may be integral to fully understanding the issue.

This results in the favoring of information that is misrepresentative of the breadth and complexity of the issue. For example, cancel culture trends on social media can ignore the context of the situation and history of the subject canceled, severely biased in favor of the instigators’ moral code.

While the internet serves to enable people’s connection with other people, culture and society, it also facilitates the spread of inauthentic, inaccurate or misrepresentative information. An example of the impact of this amplification of information and opinion is James Charles’ 2019 to 2020 controversy with Tati Westbrook. Merely two days after Westbrook released a video discrediting Charles, he lost over a million subscribers to his Youtube channel.

This intense and rapid backlash was in response to the insinuation of his malicious actions, which were then revealed to be overblown and inaccurate. While Charles’ reputation and business eventually recovered, the rapid collapse of his influence, due to the community’s collective adoption of the narrative of his misconduct and “danger to society”, demonstrates the ramifications of widespread alarmism and the exchange of misinformation.

Although alarmism in the media can persuade people to support the call for action, it also drives people to adopt strongly differing perspectives on the subject, only some of which support the media’s agenda.

Differing opinions isn’t always a bad thing; it is beneficial to collaboration, as when people of different backgrounds and perspectives are able to work together, they develop an action that accommodates their expanded frame of information. However, as seen by the result of the COVID-19 stimulus bill impasse, the irreconcilable opposition between communities leads to the stagnation of a common effort.

People’s misunderstanding of the issue’s complexity and scope further impairs their ability to respond with a solution that fully encompasses the issue.

Being a teenager in a world that screams about contradictory issues, from the evils of a grand and unstoppable enemy, the uselessness and ignorance of those in power, removed from reality, to the impending doom of worlds outside one’s window, is confusing. But this disarray signals peoples’ responsibility to dive deeper, to understand these complexities and their impact on society.

In experience, change is sometimes difficult. Accepting inherent biases and faults is hard, and acknowledging the worth of others’ opinions that can contribute to beneficial action is harder. Alarmism can discredit and dissuade people from advancement, but through this adversity, pursue change, whether it be to your mindset, actions or to the world around you. Come to your own conclusions. And use reliable sources.