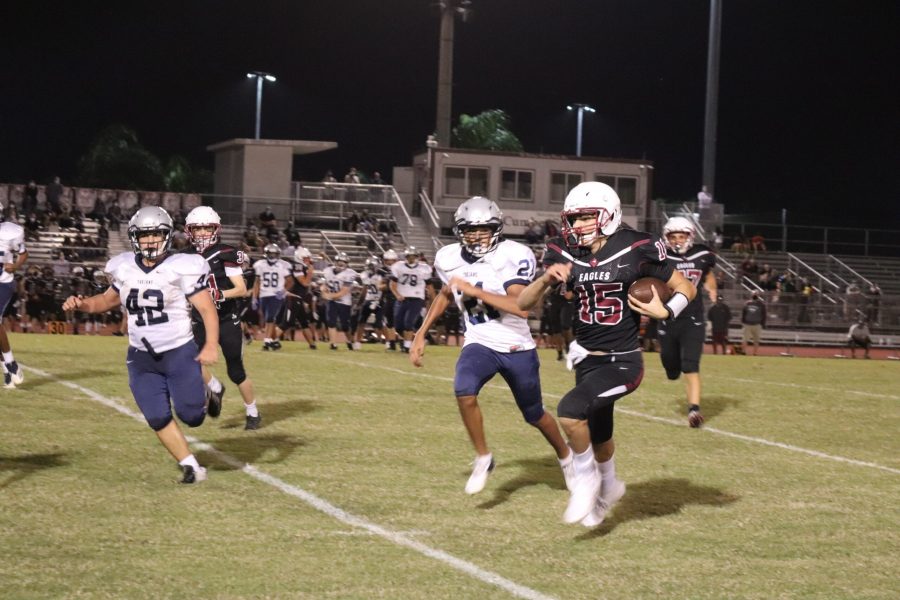 The Marjory Stoneman Douglas JV football team  kicked off their season Nov. 4 with a victory against the J.P. Taravella Trojans at Cumber Stadium. The Eagles were in complete control of the game winning at a commanding 40-0.Kickoff occurred at 5:00 p.m., as the Eagles received the ball; striking quickly and scoring a touchdown, the Eagles took an extra point to take control of the game.

The Eagles’ main strength was their rushing attack, as they had several big plays on the ground. They didn’t turn to executing many long passing plays through the air because of their early lead. Backup Quarterback Zach Goldberg (5) scored on a design QB run, taking the ball from midfield all the way to the end zone.The Trojans’ offensive line took multiple flags for holding, and both teams were plagued by offsides penalties and false start penalties early on.The only injury throughout the game was the Trojans’ kick returner, after he was tackled hard on a return in the second half. Fortunately, he got up and was able to watch the rest of the game from the sideline.Kicking was a major problem for the Eagles, who only made one out of four of the extra points they attempted. The Eagles even had to resort to attempting two fake extra points, successfully converting one, and drawing a flag against the Trojans on the other. Zach Goldberg (5), Ryan Spallina (15) and Ryan Williams (7) scored rushing touchdowns.This victory means that the Eagles are 1-0 in a shortened season with only three games. Next Tuesday at 6:30 p.m. they take on the Everglades Gators, who are also 1-0 after a win last week.