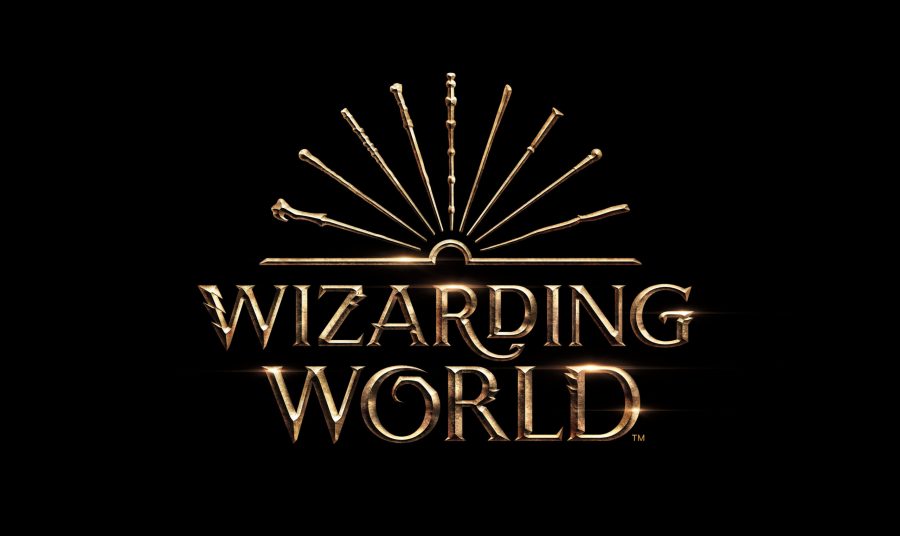 The Wizarding World logo depicts an open book, which is a nod to the franchise's literary origins. The book’s fanned-open "pages" are actually wands, which belong to characters from either the Harry Potter or Fantastic Beast franchise. From left to right, they are the wands belonging to Voldemort, Ron Weasley, Hermione Granger, Harry Potter, Albus Dumbledore (the Elder Wand), Newt Scamander, Tina Goldstein, Queenie Goldstein, and Gellert Grindelwald (the wand he possessed before claiming the Elder Wand).

The Wizarding World logo depicts an open book, which is a nod to the franchise’s literary origins. The book’s fanned-open “pages” are actually wands, which belong to characters from either the Harry Potter or Fantastic Beast franchise. From left to right, they are the wands belonging to Voldemort, Ron Weasley, Hermione Granger, Harry Potter, Albus Dumbledore (the Elder Wand), Newt Scamander, Tina Goldstein, Queenie Goldstein, and Gellert Grindelwald (the wand he possessed before claiming the Elder Wand).

The “Harry Potter” series, which began as seven books written by J.K. Rowling and then transformed into eight movies, has been growing in popularity recently. Throughout this series, the wizards and witches are sorted into four houses, including Gryffindor, Hufflepuff, Ravenclaw and Slytherin.

The Gryffindor House was founded by Godric Gryffindor. Their symbol is a lion, which represents a Gryffindor’s main qualities: courage, bravery and determination. Also, their house colors are scarlet and gold, so people in that house have to wear those colors in their uniform at Hogwarts School of Witchcraft and Wizardry to convey which house they belong to. Each house has common rooms, which the characters stay at in their free time. The Gryffindor common room has large windows that let in a great amount of sunlight and red furniture.

“I’m a Gryffindor because of my brave and adventurous remarks,” freshman Natalee Cohen said. “Gryffindor is truly the superior house and has all of the favorite characters that I can relate to. I feel that I would most fit in that house and get along with everyone since we are quite frankly so similar.”

Another house in the “Harry Potter” universe is the Hufflepuff House, founded by Helga Hufflepuff. Hufflepuffs are associated with being hard-working, patient, fair, just and loyal. Their symbol is a badger and their house colors are yellow and black. Similar to the Gryffindor common room, the Hufflepuff common room also has windows and it has earthy decorations.

“I think I’m a Hufflepuff because I’m very loyal and trustworthy to my friends,” freshman Ashley LoFurno said. “It is my favorite house because of its bright energy and memorable house members, like Tonks.”

Not as many characters in the “Harry Potter” series belong to this house, compared to the number of characters in Gryffindor. However, some characters in Hufflepuff are Newton Scamander, Nymphadora Tonks and Cedric Diggory; the house’s head is Professor Pomona Sprout.

The Ravenclaw House, founded by Rowena Ravenclaw, has an eagle as its symbol, which represents wit, wisdom, acceptance, intelligence and creativity. Those involved in this house are associated with the colors blue and bronze. The Ravenclaw common room is surrounded by books and the ceiling is a painted dome of the night sky.

The head of the Ravenclaw House is Filius Flitwick. Some characters that are in this house are Luna Lovegood, Sybill Trelawney, Cho Chang and Myrtle Warren.

The last house is Slytherin, founded by Salazar Slytherin. Slytherins are most known for turning evil, as Headmaster Dumbledore stated that they have, “a certain disregard for the rules,” in the Harry Potter movies and books. However, their traits are resourcefulness, determination, pride, cunning and ambition. The symbol that represents them is a serpent and their colors are green and silver. The Slytherin common room gives off the opposite vibe as the Gryffindor common room with its very dark aroma and green lights.

“I believe I am a Slytherin because I am brutally honest,” junior Camila Fraser said. “It is my favorite house because it is the most fun and rebellious house.”

Horace Slughorn was the head of this house before Severus Snape. Also, the prime villain of the series, Tom Riddle, also known as Voldemort, is in this house as well. Bellatrix Lestrange, the Malfoy family, the Goyle family and the Crabbe family all belong to this house.

“I believe I’m a Gryffindor because every time I’ve taken a Hogwarts house quiz I almost always get Gryffindor,” freshman Kaelyn Bracco said.Everyone belongs to a certain house based on their most dominant traits. To find out which house you belong to, take the Sorting Quiz; this is the most accurate house sorting quiz, since it includes all possible questions you can receive on the WizardingWorld Quiz.