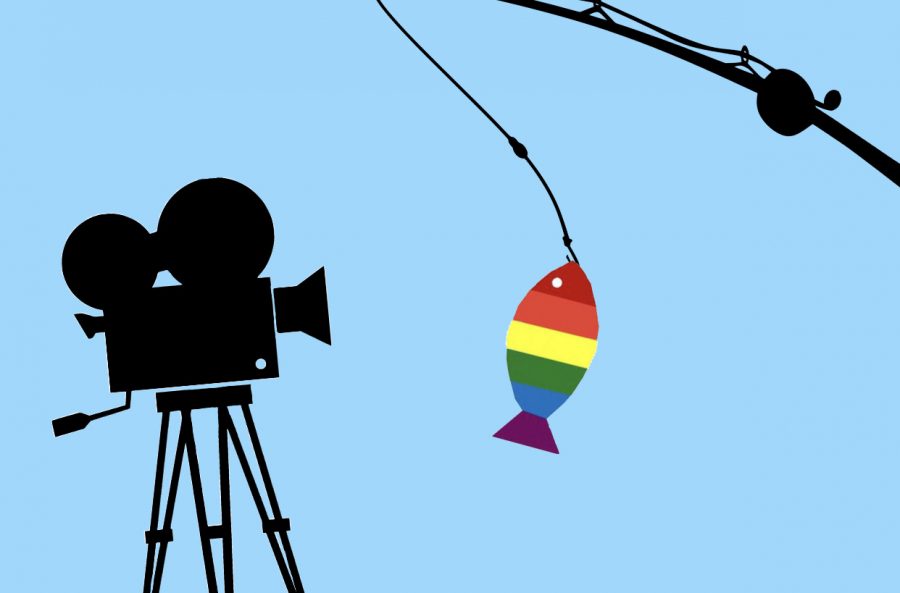 Queerbaiting is harmful "representation" for the LGBT+ community. Graphic by Melodie Vo

As humans, we often gravitate towards people we are similar to. We tend to join clubs involving like-minded people or watch certain movies containing characters we can relate with. This principle applies even more to those who feel like an outcast or significantly different than their peers.

The media often takes advantage of this notion by participating in what is known as “queerbaiting.” As defined by Pink News, queerbaiting is “a term which refers to authors, writers or showrunners (etc.) attempting to attract an LGBTQ+ audience by hinting at same-sex relationships between characters, though they’re never actually consummated.”

The goal is to entice the LGBTQ+ youth with the idea that they are not alone, but rather represented, for the purpose of gaining viewers. The idea itself seems harmless until the flash of LGBTQ+ representation is over and the show or other media returns to its regularly scheduled heteronormative programming. This tells young LGBTQ+ identifying people that their sexuality is just for others’ enjoyment and not actually valid.

Queerbaiting does not just occur in television shows or movies, it is just as prevalent on social media platforms such as TikTok or Instagram.

On April 1, 2020, I opened TikTok to see #queerbaiting all throughout my “For You Page”; the page that displays the most trending videos on the app. Popular TikTok influencer Zachary Smith had taken to social media to fake coming out as bisexual as an April Fools’ Day prank.

Smith’a 2.7 million followers consist mainly of children, who were inspired by his bravery, only to be let down by the implication that their sexuality is nothing more than a joke or skit to gain views and likes.

However, in an interview with the Huffington Post the following month, Smith announced that he was actually bisexual but was too afraid at the time to break his persona.  Despite the explanation and apology offered in the interview, it is indisputable that his April Fools’ Day prank added fuel to the queerbaiting fire.

Another form of queerbaiting is the use of stereotypes in order to purposefully portray someone who is heterosexual as being part of the LGBTQ+ community. On TikTok, it is not uncommon to see heterosexual males using stereotypical mannerisms such as a high pitched voice or a limp wrist to resemble a homosexual male in a joking manner.

Pop singer Ariana Grande additionally sparked controversy in 2019 with her “break up with your girlfriend, i’m bored” music video. In the video, Grande constantly teases an intimate relationship (though it is never consummated) between her and another female character who is involved in a heterosexual relationship.

While this teasing led viewers on and used gay culture as a marketing tactic, it also encouraged the misconception that bisexual women are more likely to cheat on their significant others.

Not only does this form of queerbaiting invalidate one’s sexuality, but it also perpetuates harmful stereotypes and stigmas surrounding the LGBTQ+ community. These stereotypes go on to influence a commonality in impressionable LGBTQ+ youth known as internalized homophobia.

Internalized homophobia is characterized as a LGBTQ+ person’s negative attitude towards oneself due to their own sexuality. This often shows up in the form of self-hatred, shame, fear, anxiety, and depression.

As someone who has experienced and continues to experience internalized homophobia firsthand, I can attest to the claim that the pushing of these stereotypes makes coming to terms with your own sexuality a lot harder than it would be otherwise.

At the end of the day, it is understood that not every same-sex relationship or character will be portrayed in the media exactly the same or with a happy ending (nor should they be). However, the hope is that going forward, the LGBTQ+ community will be given full and honest representation while avoiding common stereotypes.