[Opinion] Younger politicians are a better representation of the youth 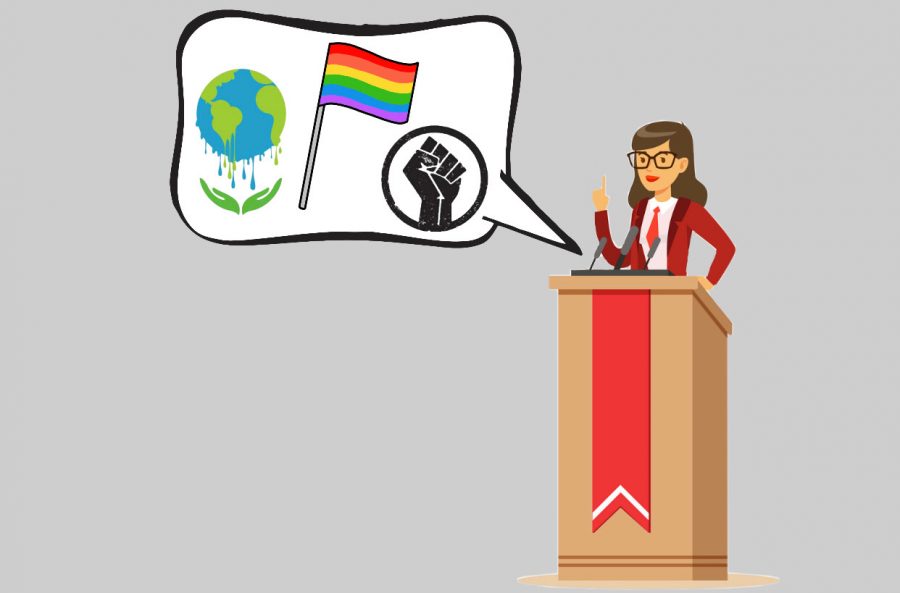 Younger political leaders tend to be more representative of issues that dis­pro­por­tion­ate­ly affect the youth such as climate change, LGBTQ+ rights and student debt. Graphic by Melodie Vo

As hate crimes rise, glaciers melt and civil unrest becomes near unavoidable, it’s time that the youth of our country get the political representation they need to solve the issues that affect them. The only way for a political system to be entirely representative of its people is if all parts of a society are involved.

However, the upper levels of the U.S. government bear resemblance to that of a gerontocracy, a society governed by old people.

Serving as a political leader of any sort is a tremen­dous priv­i­lege held by those with the hopes and plans to improve the lives of the people they represent. These fed­er­al office­hold­ers wield the pow­er to write the fate of our posterity and that of foreign countries as well.

The fact that young peo­ple don’t have adequate political ­rep­re­sent­ation is very apparent. Most of our government is composed of officials who are 50 or more years our senior and who lack the drive to deal with issues that the youth care about.

Politico found that the average age of representatives and senators in Congress was around 63, nearing a full 25 years older than the median U.S. resident. All four leading presidential contenders in the 2020 election are over the age of 60, and the two front runners, President Donald Trump and former Vice President Joe Biden, are both well into their 70s.

Not only do older politicians have both an increased susceptibility to medical issues and a higher risk of developing cognitive impairments, they fail to properly represent the issues that plague the youths of our society.

Important matters such as cli­mate change, nuclear war, gun reform and envi­ron­men­tal pol­lu­tion all have the poten­tial to affect every single life on this planet if they are not responsibly dealt with within the next few years. Yet, these issues are barely on our government’s agenda, and serve as short term topics to simply just campaign for.

They are not short term problems to the younger end of the population. Young people will be the ones forced to deal with the denial and delay of action from our ancestors’  handling of vital problems.

When it comes to the need for younger representation, climate change is one of the most important examples. Our senior counterparts continue to dismiss our pleas for effective measures to combat global warming, knowing that they will be safely underground as their posterity struggles against rising temperatures, limited food supply and oceans choking with the weight of 150 million metric tons of plastic materials.

As generations continue to become more progressive, our government officials should reflect this. When the people that represent us can’t see what it’s like to be in our shoes, young people are disenfranchised from political processes and lack any voice on the decisions that will and already are affecting us.

Younger politicians better represent the interests of young adults and teenagers who may have drastically different political and social beliefs than that of their parents. By electing younger politicians, young people are more likely to have the knowledge and capacity to participate in our democracy.

Politicians who stay in office for many years are more likely to become corrupt and lose the best interests of the citizens. We need new people with fresh ideas to replace them.

In order to incite long term changes, it is vital for young people to get and stay engaged with politics. This engagement gives them the chance to offer their opinions on the decisions of both today and tomorrow.

An inclusive political model is not only a fundamental democratic right, but it is crucial to the development of policies that respond and adapt to the needs and wishes of the young population.

Be that as it may, age should not be the only fac­tor in picking candidates. Ironically, the oldest pres­i­den­tial can­di­date of the 2020 election, Bernie Sanders, was the one with the most ambi­tious plan for student debt, war and cli­mate change, all issues that dis­pro­por­tion­ate­ly affect­ the youth. Knowing that real change comes with a diverse political unit, we should select individuals who support the ideals that we support.