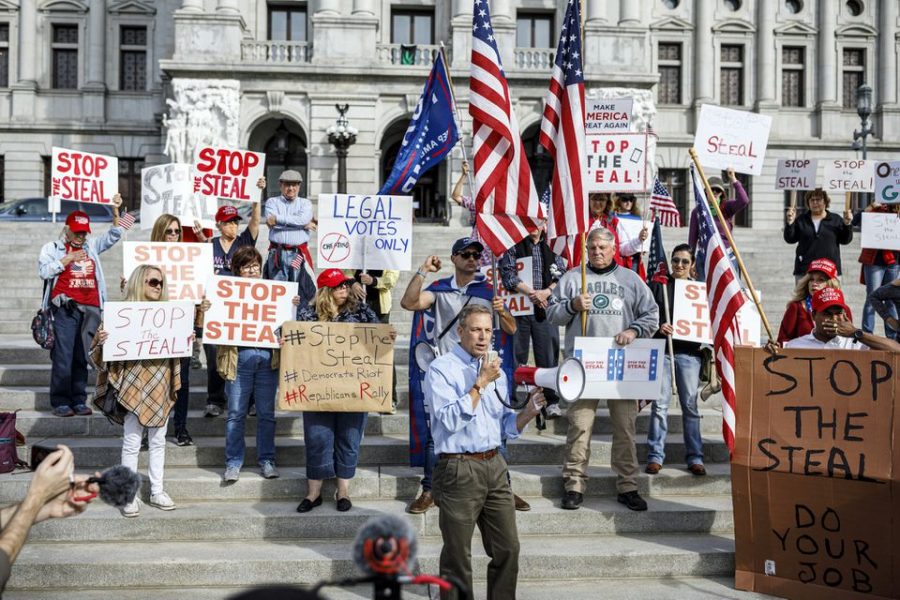 A rally to "Stop the Steal" and to count every legal vote of the election is held at the Pennsylvania state Capitol in Harrisburg, November 5. Photo by Dan Gleiter

On Nov. 5, when major networks CNN, Fox News and MSNBC all projected that candidate Joe Biden would be elected President of the United States, Democratic voters across the country rejoiced in what stood out as a decisive electoral win against current President Donald Trump, relegating him to become the 11th President in United States history to lose reelection.

People from New York to Washington D.C. were alive with celebration, with cheering crowds forming in front of the White House denoting the glee of the end of one of the most polarizing and divisive presidential administrations in recent memory.

Yet, as the cheers and celebration subsided, there was a noticeable lack of something from President Trump that has been the standard for modern American political history. When those who voted Trump out of office leaned in for a concession, all they heard were crickets.

It took almost no time at all for those crickets to be replaced by what can only be described as the wail of someone wanting to sow doubt in election results simply because the outcome didn’t favor them.

President Trump immediately began to make baseless claims of voter fraud and election stealing, even going so far as to openly claim victory on Twitter, despite no reasonable evidence of voter fraud.

Despite the president’s own agencies concurring with the reported outcome of the election, including his Cybersecurity and Infrastructure Security Agency which made a statement confirming that “the November 3rd election was the most secure in American history,” the president continues to tweet out misinformation about an election that he fairly lost.

This challenge to the outcome of the election is extremely dangerous for the preservation of our relatively democratic election system. By challenging these results, President Donald Trump is questioning the integrity of a fundamental component of the way in which the United States politically conducts itself.

This insistence of a win is reflective of the stark divides that Trump has revealed throughout his administration. By claiming that the election was stolen from him, the president empowered his supporters to take to the streets in rallies like the “Million MAGA March,” which was attended by everyone from moderate supporters to far-right extremists and hate groups like the Proud Boys, eventually descending into violence.

Despite immense political posturing from the Trump campaign, they have yet to submit any substantive evidence that fraud was committed, and certainly no evidence that it was committed on the scale necessary for them to somehow secure a win.

An incident that comes to note is the original legal case of the Trump campaign in Nevada, which attempted to somehow prove mass voter fraud through the instance of a woman named Jill Stokke, a 79-year-old legally blind individual who went to vote in person, and was told that she had already voted by mail, with the signature on the mail in ballot matching her own.

When given the opportunity to sign an affidavit that the ballot had been stolen, and thus cancel it and vote again, she denied it.

The Trump campaign’s legal arguments have essentially gone nowhere. With the president’s agencies reporting that there was no mass voter fraud, it seems clear that more than anything, this denial of a loss serves either the purpose of political opportunity, or pure vanity.

As a talking point, this denial is likely to empower Republicans and supporters of the President going into the midterms, as well as the upcoming Georgia Senate run-offs.

Whether this denial is the result of wanting political capital or simply the nature of an aggressively privileged and selfish man, this doubt of the electoral outcome will likely have harmful consequences for the near future of American governance.

The president has refused to allow Joe Biden to receive national security and intelligence briefings, a privilege usually afforded to the president-elect to prepare them to assume office.

With COVID-19 hospitalizations at an all time high, this lack of political coordination between the Trump administration, and what will eventually become the Biden administration is particularly alarming in regard to the preservation of American public health. This denial of a loss is currently wreaking havoc across the United States.

If Donald Trump thinks himself to have any dignity then he should concede the election, and provide Joe Biden with the resources he needs to effectively fill the office.

If he refuses to help transition power over to President-elect Joe Biden, then the blood of Americans and the blood of democracy will be on his hands, and the hands of the Republican Party.

Just this once, they ought to pretend like they care.