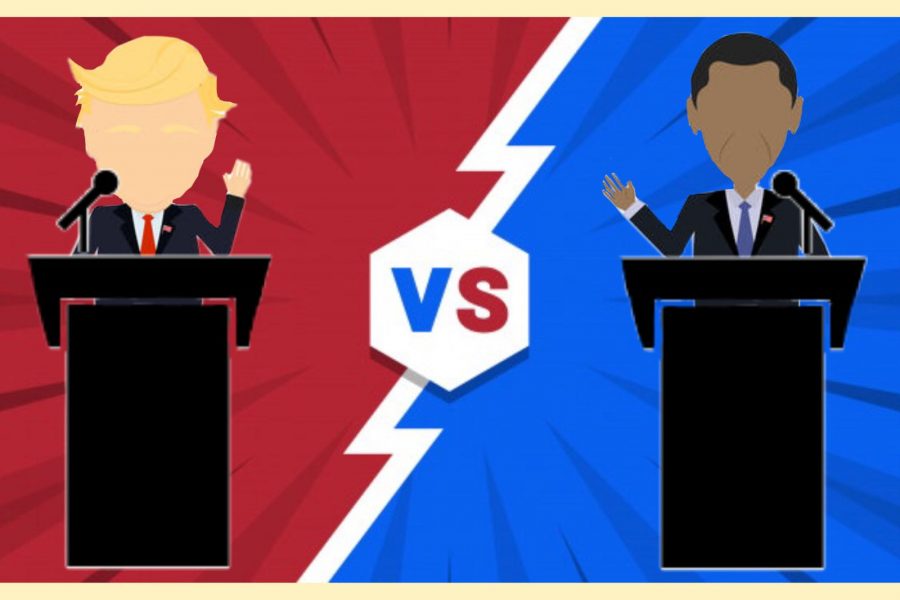 Donald Trump's effectiveness in office is compared to that of past presidents such as Barack Obama. Graphic by Melodie Vo

Looking at the current political climate, it is no stretch to say that our bipartisan system has not been this divided in a very long time. This separation between the ideologies is known as polarization.

Being that polarization is a direct reflection of a leader’s policies, rhetoric and ability to unify the nation, it is often a measure of how well, or poorly, a president performed during their time in office.

In a survey administered by The Brookings Institution, experts ranked President Donald Trump as the most polarizing of all 45 presidents. While polarization has always existed, the conditions under the Trump Administration have people not only disagreeing with those on the other side but actively hating them.

The most prevalent example of President Trump’s influence on polarization is the politicization of face masks throughout the entirety of the COVID-19 pandemic.

Nothing about the ideology of the Republican Party calls for a war on masks, however, Trump turned the matter into a Republican vs. Democrat issue. It is easy to see that if there had been any other president in office (regardless of political party,) this debate would cease to exist.

“Wearing simple face coverings is not about protecting ourselves, it is about protecting everyone we encounter. There is nothing cowardly about common courtesy,” Republican Senate Majority Leader Mitch McConnell said.

Another instance of this polarization is the way in which President Trump has referred to peaceful protestors of the Black Lives Matter movement this summer. He repeatedly generalizes this group, relating them to those partaking in violent acts such as looting and rioting and calling them anarchists and thugs.

“It was a disgrace that these people are representing the United States of America… It was a disgrace. You know what I say? Protesters your ass.” Trump said in a New Hampshire rally.

In addition to this, Trump has done little to address the concerns of the American citizens regarding the issues of police brutality, and instead maintains his belief that the Black Lives Matter movement is “a symbol of hate.”

While it can be argued that the circumstances in which Trump is operating under are out of his control, impacting his overall performance, he is not the only president who has been forced to deal with a public health crisis.

In 2009, during the Obama administration, reports of the H1N1 virus emerged and quickly became widespread. On April 26, 2009, just nine days after the first case was reported and six weeks before it was declared a pandemic, President Obama assembled a team and announced a public emergency.

Obama was additionally faced with the Zika outbreak in 2015, in which he and his national security adviser Susan Rice created the Global Health Security and Biodefense unit. This unit was responsible for future pandemic preparedness under the National Security Council.

However, in May of 2018, the Trump administration disbanded the unit, making its first mistake in the handling of the COVID-19 pandemic.

In early January of this year, intelligence officials began to disclose classified warnings about the virus in the President’s Daily Brief. On Jan. 22, Trump made his first statement in regards to the matter: “…we have it totally under control. … It’s going to be just fine.”

It was not until March 13 that Trump declared a national emergency, quite the opposite of Obama’s rapid response to a less lethal crisis.

Besides his extreme polarization, Donald Trump’s additional failure to unify the country lies in his refusal to partake in a peaceful transfer of power. According to National Geographic, “No presidential candidate has ever refused to concede defeat once all the votes were counted and legal challenges resolved.”

Today, over a week after multiple prominent news outlets such as CNN, Fox News and Associated Press projected Joe Biden to win the presidency with 306 electoral college votes, President Trump has yet to concede the election.

President Trump continues to claim that the overwhelmingly Democratic mail-in ballots are fraudulent after encouraging his supporters for months to vote in-person at the polls instead of via absentee ballot.

He has sent out a slew of angry Twitter posts calling for a fair election (and a Trump win,) despite Biden’s popular vote lead of almost six million votes and counting. When he was behind in battleground states Pennsylvania, Wisconsin and Michigan on Nov. 5, he tweeted “STOP THE COUNT.”

This failure to concede poses a threat to democracy and encourages distrust in facts as well as the government and the media.

The division that we see should come as no surprise being that Trump is one of the only three presidents in American history to be impeached, and the only president to use social media as a platform to spread hate and misinformation.