Rules of the Game: How volleyball matches are scored 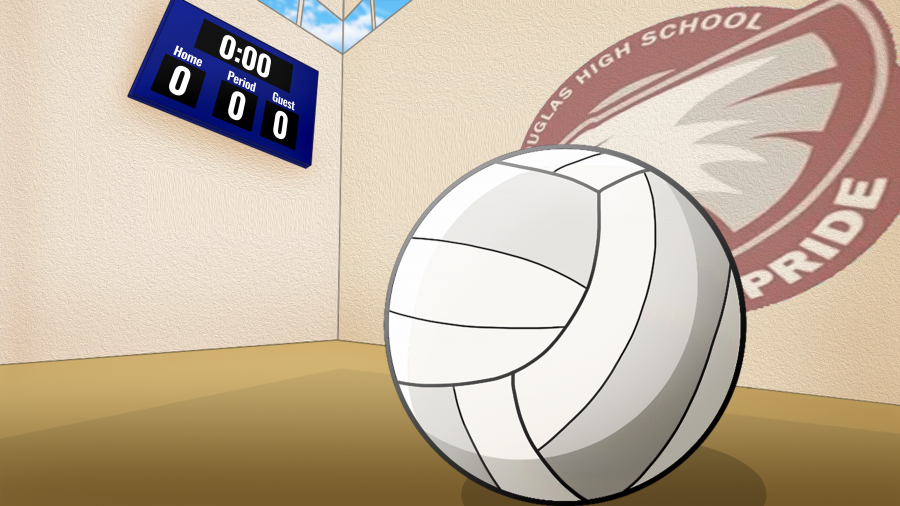 Bump, Set, Spike. To win a set in volleyball, a team has to score 25 points. Teams each have six players divided between the front and back of each side. Graphic by Julia Landy

Bump, Set, Spike. To win a set in volleyball, a team has to score 25 points. Teams each have six players divided between the front and back of each side. Graphic by Julia Landy

The main goal of volleyball is to win sets. For a point to be scored in a volleyball match, the ball has to return over the other side of the net within three hits; more than three gives the opposing team the point.

In order to win a set, 25 points must be scored; however, they must have a clear two-point advantage in order to win.

If the game becomes tied up with a score of  24-24, the two teams participating in the match play until a team gets a two-point advantage. During each set, the coach of each team can call two 30 second timeouts to organize their next plays.

Points also can be obtained when the opposing team fails to hit the ball over the net, or fail to keep it in bounds on the court.

Within each row, there are specific volleyball positions. The front row consists of a right side hitter, middle hitter, and setter. The positions in the back row are middle blocker/libero, setter and outside hitter.

In a volleyball game, players must bump, set or spike the ball. In most cases, one player will receive the ball from over the net, the setter will set the ball to a teammate and the last player to touch the ball will spike it over the net.

Another rule in volleyball is the inability of a player to double hit, which is when one person hits the ball twice in a row. An exception to this rule is if a setter were to set the ball back to the person who bumped it first. The overall result of a double hit will be a loss of points.

Another exception is if the ball is getting blocked and after they block the ball they are allowed to hit the ball again to try and get it over the net. When it is blocked the same rules apply with three hits

There are many other ways to give the opposing team points. For instance, if a player steps over the baseline of the court or if the ball hits the net after being served, the result will be a gain in points for the opposing team.

Any contact with a ball that isn’t a bump, serve, set or spike is considered illegal. Touching the net with any body part is also illegal and gives the other teams points as well.

If the ball goes under the net, or the ball touches the floor, the opposing team earns the point.  If the ball somehow touches the ceiling, it does not interfere with the play. You can still hit the ball over the net if that isn’t your third hit, you can also continue playing that round.

One position that cannot rotate to the back row is the libero; the person in this position stays in the backline, and normally the player who gets that position is the best ball handler on the team.

When playing libero you rotate with two people that normally can’t play the backline very well. Once the play is over and the libero has to rotate to the front line, they get switched out.

In a volleyball match, the ref can call out little things such as a carry which is illegal. A ‘carry’ is considered as a catch. If you get called for it, then the other team will receive a point.

Azul Thurdekoos (3) is a sophomore for the Marjory Stoneman Douglas junior varsity volleyball team. She has been playing volleyball for quite some time now and finds it a way to destress from the outside world.

“The game itself can get really stressful and get to you especially if you make mistakes or the ref makes a bad call that they shouldn’t have,” Azul said. “It’s still a way to work on your mentality and make it stronger.”

Since volleyball is a competitive and active sport, all volleyball players have to wear knee pads when playing; the players dive on a hard floor and can harm their knees easily.

Armando Thurdekoos, a freshman at MSD, goes to all of his sister Azul’s volleyball games. After watching her games, he recognizes the time and effort that goes into each game.

“I never thought volleyball would be such an interesting sport,” Thurdekoos said. “ The amount of competition in the game is astounding.”

When a volleyball game is being scored it’s easy to be distracted from what is going on in the game. Many times there will be balls that the Eagles think should have not been called but it was.