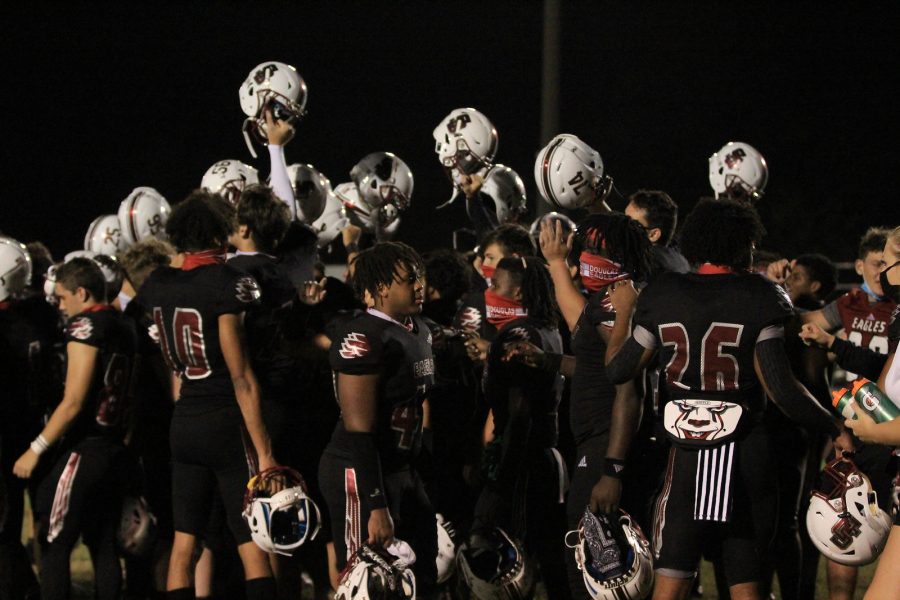 The Eagles varsity team huddled together after a big win. Coaches held the players back after their 28-3 win to celebrate their efforts. Photo courtesy of Kelsie Yon

The Eagles varsity team huddled together after a big win. Coaches held the players back after their 28-3 win to celebrate their efforts. Photo by Kelsie Yon

On Friday, Nov. 20, the Marjory Stoneman Douglas varsity football team was scheduled to face the J.P. Taravella Trojans. This would have been the Eagles’ third and final game of their regular season, due to the COVID-19 schedule adjustments.

The Eagles started their season on a victory spree,winning both of their games against the Coral Springs Colts and the Coral Glades Jaguars.

Their third game was originally scheduled to be against the Hallandale Chargers, but was cancelled due to unplayable field conditions after Tropical Storm Eta passed.

Just as the Eagles prepared to improve their record and finish the season strong, the surge of COVID-19 cases both in the state and in school caused their game against the Trojans to be cancelled.

Although aware that the game was cancelled for safety reasons, many players had a difficult time because their season ended with only two games. The awfully short season; however, was most difficult for seniors that are facing their last year of football.

“It’s very frustrating,” right tackle Prince Aldeus (72) said. “As a senior, it’s my last year, and I didn’t get to play a full season. But there isn’t much I could do about it.”

The seniors are confronted with many opposing feelings as they are ecstatic to finish the season undefeated, but discouraged to have an unsatisfactory end to their high school football career.

The team still hopes to reschedule the lost games, as well as compete in a playoff bracket; however, with COVID-19 cases surging, the 2020-2021 season’s likelihood of returning is currently considered to be very low.

Nonetheless, the MSD community celebrates the Eagles’ first two wins of the season as a sign of progress.

“It wasn’t our main hope for a shortened season, but we were given a chance to go out and play with one another for a few games, and it’s better than no games,” left tackle Brock Moskowitz said.

Even though the season was not ideal, the Eagles were dominant in their games, and the team’s return gave many in the community a chance to follow the school’s journey once again.

As of Nov. 20, none of the cancelled games have been rescheduled, and there are no official plans for playoffs, amidst speculation.