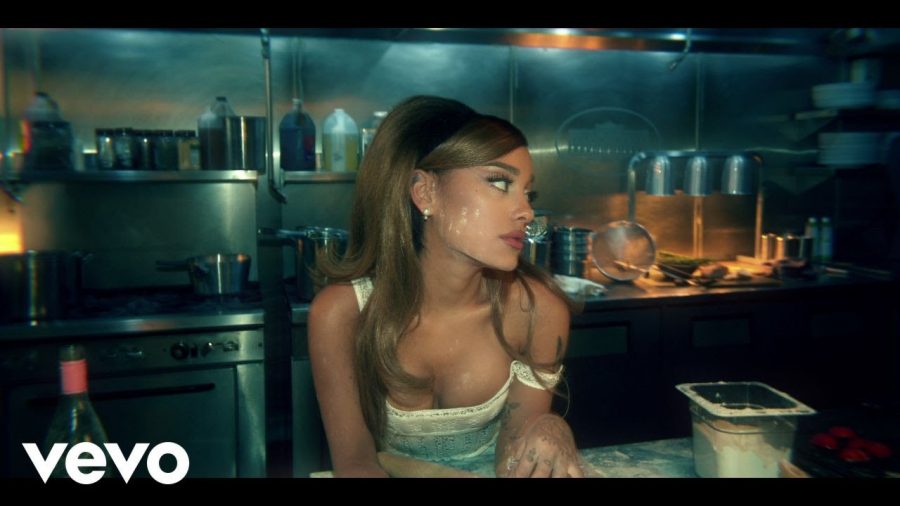 The album has 14 songs; all the songs were co-written with other songwriters such as TBHits, Nija and many other writers.

Starting with “Shut Up,” it begins with an orchestral intro and outro. It has a quick beat and original lyrics, making the chorus so catchy it will be stuck in your head. The song regards how people respond to her life and that they should “shut up” since it isn’t their place to talk. For instance, Grande says in her songs, “How you been spending your time? (How?); How you be using your we?”

“34+35” has a fresh combination of beat, rhythm and vocals. Making it very replayable, the lyrics are intimate to Grande”s to  life shown in lyrics, “I don’t wanna keep you up (you up)But show me, can you keep it up? (It up?)”

“Motive” (with Doja Cat) shows a beat and lyrics that are reminiscent of “34+35,” while still being completely different. Doja”s and Grande’s voices blend nicely with one another, however, Doja was less apparent in this song than expected.

“Just like Magic” shows beautiful vocals and beats for the intro. The lyrics and beat are the most unique out of the whole album. The inspirational tone of the song is different from all the other songs on the same album. “Good karma, my aesthetic (Aesthetic); Keep my conscience clear, that’s why I”m so magnetic.”

“Off the Table” has less of a rap style as the other songs. The song features The Weeknd, as they harmonize beautifully with the lovely lyrics. The song expresses the struggles of a relationship, “I’ll wait for you; Even though it always feels like I’ll be number two; To someone you can’t hold anymore.”

“Six Thirty” is a slower song similar to “off the table”. It feels most like Grande’s old work, the song is like most, very catchy and easy to listen to over and over again.

“My Hair” has a guitar intro that feels old school and vintage, as well as the rest of the song. The vocals fit excellently with the beat. It’s one of the songs that could be easily replayed.

In “Nasty” the beat is close to others in the album and doesn’t feel very much innovative or new.

For the song “the Side,” the intro and beat have a cool rewind effect and smooth and vocals. Overall, reminiscent of “six thirty” whileq still being unique and particular.

“Love Language” is one of the most unique songs, as it includes an exciting intro, catchy tune and lyrics. However, it has a weird outro just when the song seems over.

The song “Positions” has a unique beat for an intro and it stands out with its bursting creativity. Not to mention the tempo at which the song goes is quite speedy. The song is a sign that women can do both, have a successful career and be in a devoted relationship.

“Obvious” has phenomenal lyrics and chorus. It starts off slow but the pace begins to speed up with amazing vocals.

“POV” is a slower and emotional song, with vocals, lyrics and beat. The song communicates about how Grande wishes to be seen how others view her. “I’d love to see me from your point of view,” she claims in the song.

The more lackluster songs of the album are “Nasty,” “Motive” and “Safety Net.” They felt the least different and innovative out of the album and so similar to other songs out there.

The combination of all the songs results in one of the greatest albums of this fall.