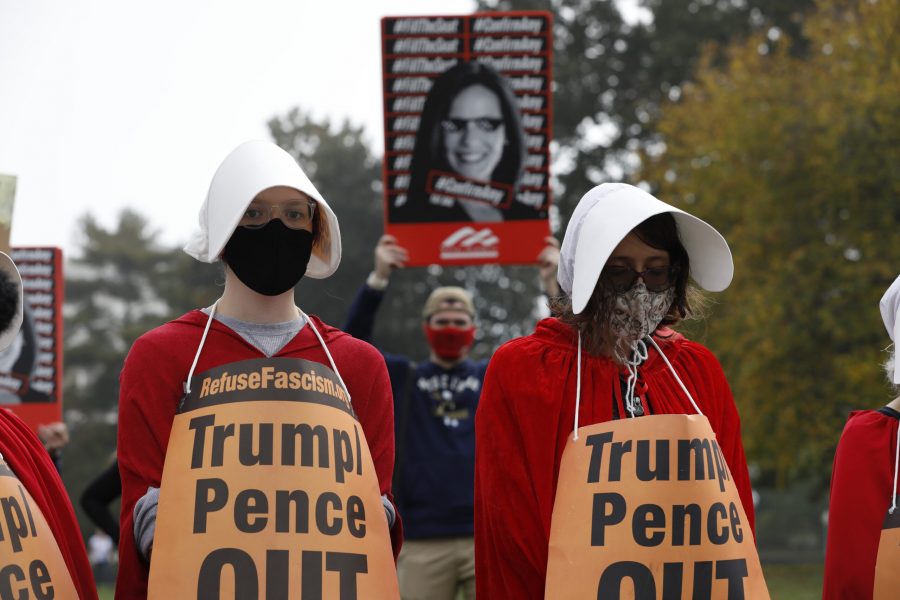 Amy Coney Barrett was rushed to be sworn in as Ruth Bader Ginsburg’s replacement as a Supreme Court Justice at 6:28 p.m. on Tuesday, Oct. 26. Her nomination for Supreme Court Justice has been a highly discussed and politically dividing issue. For those that may be wondering why so many people are so vocal against her confirmation, it’s important to know who Barrett is and what she represents.

Let’s start with Barrett’s legal history. Barrett has only been a judge for three years and has spent two years in private practice. She’s never tried a case, never argued an appeal, and never argued before the Supreme Court. Most of Barrett’s private work involved civil cases, not criminal cases. All of this makes her the least experienced Supreme Court nominee since 1991.

On the matter of women’s rights, and most importantly women’s bodily autonomy and reproductive healthcare, Barrett has expressed her extremely conservative viewpoints on various occasions.

In 2006, Barrett signed her name to an ad by the St. Joseph County Right to Life group in the South Bend Tribune, a newspaper in Indiana. The ad stated the undersigned “oppose[s] abortion on demand and defend[s] the right to life from fertilization to natural death,” stated an article by the New York Times.

Barrett signed a statement in 2012 claiming that former President Barack Obama’s administration’s policy to cover the cost of contraception was “a grave violation of religious freedom and cannot stand.”

Barrett has talked about abortion rights in the University Magazine in 2013, and said, “Life begins at conception.” She believes in the possibility of reexamining Roe v. Wade, the Supreme Court case that legalized abortion in the U.S.

In 2015, she signed a statement for Catholic bishops, which endorsed the church’s conservative views on abortion, sexuality, and marriage.

Barrett also belonged to the Unversity of the Faculty of Life until 2016, which promotes anti-abortion rhetoric.

We have a separation of church and state in America for a reason, to make sure that all get to worship peacefully and that no person’s beliefs are forced onto others. Judges are expected to evaluate their cases on merit and without prejudice, especially at the level of the Supreme Court. Amy Coney Barrett is incapable of that.

Women everywhere are fearful that if Roe v. Wade goes back into this current 6 to 3 conservative majority court, abortion rights in the U.S. will be overturned. In the 2020 election, it was confirmed that Amendment I in Louisiana was approved, essentially stating in their state constitution that abortion is not a right and does not require any funding.

If Roe v. Wade is overruled, around 22 states like Texas, Utah, and Arizona are predicted to ban/restrict abortion as soon as they can, and with Louisiana now removing abortion rights from their constitution, it can be expected they will be the first to completely ban it if they can.

This will increase the risk of death and injuries for “back-alley” abortions, which are abortions done by people lacking the necessary skills and/or in an environment lacking minimal medical standards. This overturn will also increase at-home abortions which can involve pregnant women throwing themselves downstairs or putting a hanger up their vaginas to terminate their pregnancies. Any type of unsafe abortion is a life-threatening procedure and removing this protection gives women limited to no safe options.

The rights of the LGBTQ+ community can also be seen as at risk with the confirmation of Barrett.

The Human Rights Campaign stated, “[Barrett] defended the Supreme Court’s dissenters on the landmark marriage equality case of Obergefell v. Hodges, questioning the role of the court in deciding the case. She said the Title IX protections do not extend to transgender Americans claiming it’s a ‘strain on the text’ to reach to that interpretation. She misgendered transgender women, referring to them as ‘biological males.’”

Title IX is supposed to protect those who report sex discrimination, sexual harassment, or sexual violence. The law should apply to all people, especially the transgender community since multiple studies show that 50% of transgender people will endure some type of sexual assault in their life. Barrett did not agree with this statement.

Supreme Court Justices Clarence Thomas and Samuel Alito have recently talked about revisiting same-sex marriage, believing it is not explicitly stated that the case will have “ruinous consequences for religious liberty.”  With a current 6 to 3 conservative majority and Barrett joining as a Judge with a seemingly homophobic past, marriage equality does not feel secure.

26 different LGBTQ+ legal councils and organizations blatantly opposed her potential Supreme Court nomination in 2018 and not one member of the Democratic Party voted for her as the Supreme Court Justice replacement in 2020.

With her problematic history with women’s rights, LGBTQ+ rights, and BIPOC’s (Black Indigenous People of Color) rights, it’s not hard to see why so many openly oppose her.

This was an unusual ruling for such a case and showcased not only her bias, but her use of white privilege by not even trying to empathize with what it’s like to be called a racial slur, especially in a workplace environment.

According to the NAACP (National Association for the Advancement of Colored People), “Mr. Smith’s counsel quoted the evidence attesting to use of the n-word and expressly relied on that evidence to support the racially hostile work environment claim.” However, when questioned about the case in her confirmation hearing, Barrett lied and, “[Smith] didn’t tie the use of the n-word into the evidence that he introduced for his hostile work environment claim.”

Amy Coney Barrett is also a risk to universal access to healthcare, protecting the wealthy, and much more. However, her threat to human rights in the United States cannot be ignored.

To be clear, women’s rights, LGBTQ+ rights, and BIPOC rights are all human rights. People of all these communities fear the power Barrett now holds.

Whether you fall into these communities or not, it is our duty to speak up for those being spoken over. If Barrett continues to show her bigotry as the new Supreme Court Justice, we, the American people, have to not only tell her, but show her that we will not stand for discrimination and inequality, especially not in the highest court of law.