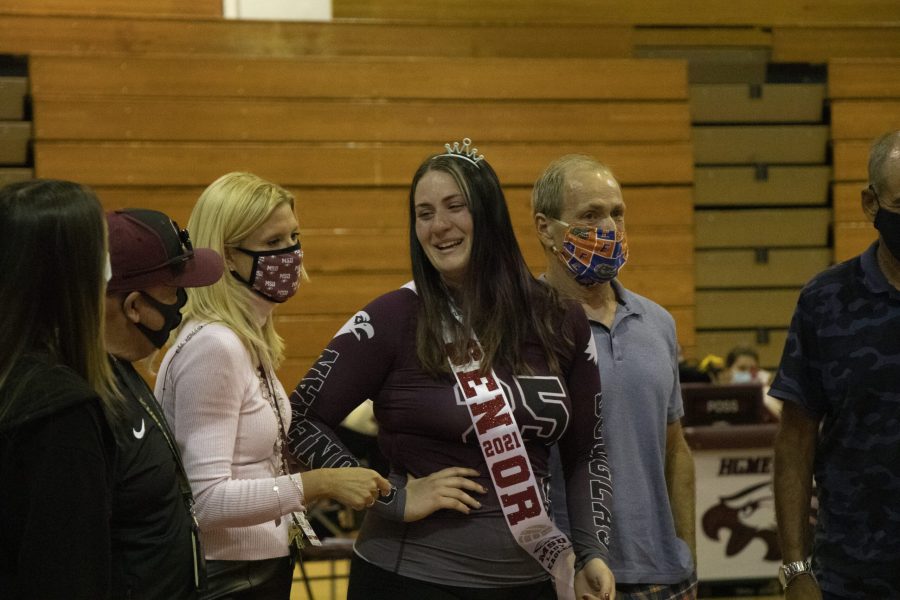 Senior Megan Pittman (25) being announced with both her parents and principal Michelle Kefford beside her. Photo by Kelsie Yon

Senior Megan Pittman (25) being announced with both her family and principal Michelle Kefford beside her. Photo by Kelsie Yon

The game was a special night for the seniors as it was senior night; a special game that honors the seniors. The upperclassmen were joined by their family, friends and classmates in the gym to celebrate them and their accomplishments as seniors.

Emotions were high in the gym as family and friends of the seniors watched them officially graduate from playing volleyball for MSD. While some parents cried in the moment, other parents were jumping for joy.

Although a big part of the night was to commemorate the seniors, the Eagles still had to face off with the Jaguars. MSD had the first serve with senior Isabella Mercer (3) as the server.

After starting the first set, the Eagles were down by four points. The gym was going crazy cheering the seniors on from the sidelines.

MSD went on a serving streak as multiple players were trying to win back the points they lost to get ahead of the Jaguars. The Eagles ended up tying the game and later gaining the lead.

The Jaguars kept tieing the Eagles, causing MSD to have to play until 27 points. Unfortunately, the Eagles fell short of the first set and lost the set 27-25.

After a disappointing loss in the first set, the team decided it was time to tie up the sets by winning the second one. The energy was still high in the gym and the seniors were ready to fight to win.

With many big hits and saves by the players, it wasn’t enough to put them in the lead. They were losing by two and in order to have a chance at winning, the Eagles had to win the next two sets.

Being down by one set pushed the Eagles to start the fourth set strong with great plays by all the players. Highlight plays came from Sofia Cheremeta (6) when she made two amazing diving saves to keep the Eagles in the lead.

The fourth set ended with a final score of 25-17 with both the Eagles and the Jaguars having won two sets each.

The Eagles ended up losing the fifth set after fighting hard against the Jaguars. Unfortunately, they fell short of the win. Even though they didn’t get the result they wanted, they had a memorable night nonetheless remembering four unforgettable years.