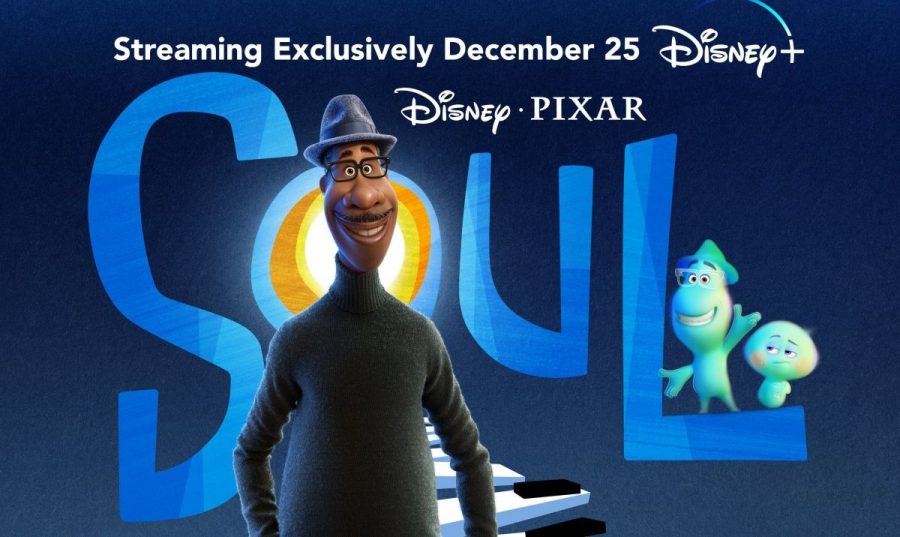 The new family movie "Soul" is now available to watch on Disney+.

The new family movie “Soul” is now available to watch on Disney+.

On Dec. 25, 2020, Pixar released the movie “Soul” to Disney Plus. The movie was directed by Academy Award winner Pete Docter and written by Mike Jones and Kemp Powers.

“Soul” is a movie about death, jazz, longing and limitations. The story follows Joe Gardner (Jamie Foxx), a middle-school band teacher whose life has not gone as expected. Following a great day, one small mishap takes him from the streets of New York to the Great Beyond. In hopes of avoiding the bright, white light on the other end of the walkway, he sprints through a crowd in the opposite direction where he falls off the other end and winds up in a brightly colored zone known as the “Great Before,” where human souls pass through on their way into and out of life to find their quirks and interests before heading to Earth.

After those events, Gardner becomes a mentor to Soul 22 (Tina Fey) who has never understood the appeal of human experiences. Throughout the story, Gardner desperately helps Soul 22 find a passion,  learning what it means to have a purpose and a spark in the end.

Director Pete Docter began developing “Soul” in 2016 after winning his second Academy Award for the movie “Inside Out.” In 2018, it was announced that Docter was planning to create this film and in 2019, Pixar formally announced the new movie.

In the time the film has been released, it has already been nominated for various awards. “Soul” is predicted to become nominated for the Best Picture Oscar, according to the latest odds. The film already has the reviews to make it a strong contender, scoring an 88% on MetaCritic and a 98% freshness on Rotten Tomatoes thus far.

Docter yet again amazes fans and critics’ expectations as seen by the positive reviews on his film. Brilliantly animated, funny, deeply moving and startlingly profound, the film does an incredible job at capturing all parts of life. The movie does an amazing job at combining the features of the world fans are familiar with, such as the crowded city and the Subway, as well as combining new aspects brought in through different realms.

This is a perfect family movie that people of all ages could enjoy and connect to. The characters in the film are relatable to people both young and old, seeing as sometimes everyone feels lost in this world and in search of their own purpose.

Although animated, both the human and nonhuman characters are beautifully done and used in a clever way throughout the story. The New York displayed in the movie is just a notch away from reality and so authentically executed, in true Pixar fashion. All the hard work put into this film is truly visible through the work of the animations and every little sought out detail that goes along with it.

What makes this movie as great as it is, is it’s meaning. Everyone who watches the film is guaranteed to get something out of it. The movie is touching and moving and filled with meaningful life lessons. The film really makes you reconsider life in a positive way and teaches you to not always listen to what others want you to do to fit in, but instead to follow your own path. The film is a reminder to really take in the small things in life in order to live life to the fullest and to not take anything for granted.

“Soul” brings a unique view to the life we know and the world we live in. It’s easy to get attached to the unique characters and creatures. It gives fans a feeling of connection and comedy, especially in the midst of the pandemic.