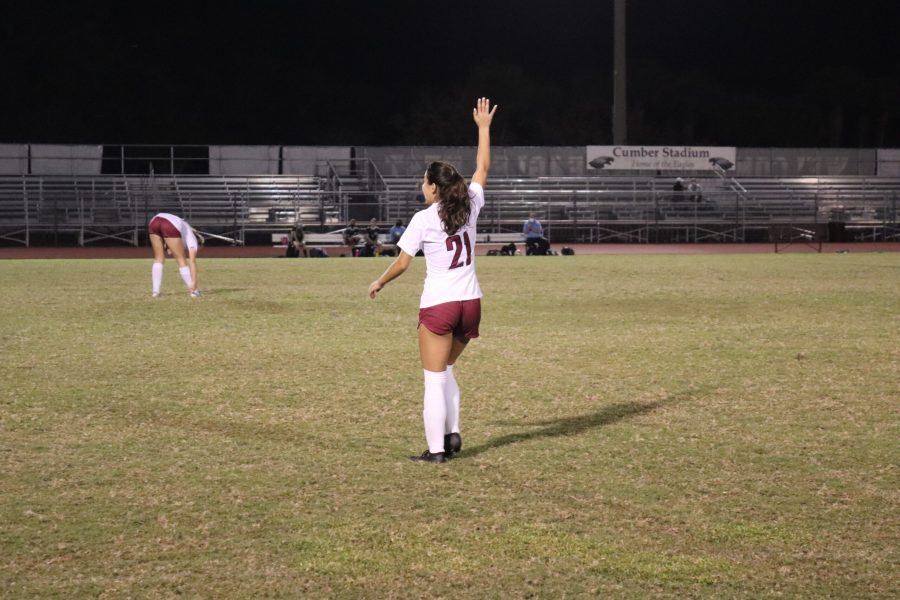 Calling the Shots Forward Victoria Alvarez (21) grabs her teammates' attention as she is unguarded by the opposing West Broward Bobcats. Photo by Fenthon Aristhomene

Calling the Shots Forward Victoria Alvarez (21) grabs her teammates’ attention as she is unguarded by the opposing West Broward Bobcats. Photo by Fenthon Aristhomene

On Monday, Jan. 11 at 5 p.m., the Marjory Stoneman Douglas High School women’s varsity soccer team faced the West Broward Bobcats in their third match of the season. This was the Eagles’ second game at home, entering with a record of 2-0.

After having two shutout wins leading up to the game, the Eagles looked to keep up their strong defensive performances. The team’s attackers also looked to keep momentum after scoring six goals against Fort Lauderdale in their last match.

Once the teams kicked off, the Eagles had a slow start.

West Broward kept attacking the Eagles defense throughout the first half. After several chances, the Eagles were fouled in the penalty box, leaving the Bobcats with an opportunity to score. The team ended up scoring, which put the Eagles at 1-0 in the first half; this was their first time they had been scored against for the season.

The Bobcats lead served as a wake-up call for the Eagles, as they began to display much more energy after the goal. The team began to prevail against West Broward, and eventually, the Bobcat’s goalkeeper hit the ball right to Eagles midfielder Lilly Conn (5), who scored from a close shot to tie the game at 1-1.

After halftime, the Eagles were in greater control of the ball and had more opportunities to score.

With the pressure put on the Bobcats, their goalkeeper misplaced a pass that landed right at the feet of Eagles forward Mia Engelbart (10), who scored in front of an empty net to give the Eagles a 2-1 lead.

“Coach Rountree always gives us a great pregame speech to get us pumped, and we always focus during warm-ups to take our games seriously,” Engelbart said.

At that point, the Eagles rarely gave up the ball and were in prime position to score another goal. A Bobcat’s player committed a foul a long distance away from the goal and gave the Eagles a free kick, where midfielder Emily Burke (14) stepped up to shoot. Although it seemed like a small window to score, she drove a powerful shot into the goal that sent the Eagles team into celebration.

Long Shot Midfielder Emily Burke (14) delivers a hard kick over the heads of the defending West Broward Bobcats to give the Eagles a 3-1 lead. Gif by David Lopez

“Every time there’s a free kick, the first person that steps up has to be ready. I was right there, so I grabbed the ball and felt I was ready to take the kick,” Burke said.

With a 3-1 lead, the Eagles held strong and impressed with a comeback win. Not only did the attackers continue their strong start to the season, but the team also had another strong showing from their defense who responded well to conceding their first goal.

“Our opponents gave us a good run. The key [to defense] is communication and teamwork,”  defender Lizzie Sheehy (8) said.

With this win, the Lady Eagles progressed to 3-0 in the season, to which they would prepare to keep their undefeated record against North Broward Prep High School.

On Wednesday, Jan. 13, the Eagles took the field at 4 p.m., looking to keep their season momentum against NBP.

The Eagles had an unexpectedly tough battle against North Broward, with the opposing defense playing tighter than those in previous games.

Many players proved to be strong attackers for the Eagles as they scored in multiple games. However, the offensive component for the Eagles seemed to not be playing like their usual selves, as they didn’t score in Wednesday’s matchup.

With the Eagles trying to hold on from the defensive side of the team, North Broward had the upper hand, especially with their home-field advantage.

North Broward eventually took control, scoring a goal to bring themselves a lead against the Eagles. With the Eagles just behind, they began to push through to try to tie the game, and possibly take the lead.

“We’re always looking to improve and constantly get better. We can work on pressuring the ball better, work on moving collectively as a unit, playing forward more and transitioning faster,” Burke said.

In spite of their relentless effort, the Eagles weren’t able to score before the final whistle blew.

The Eagles hustled off the field, disappointed in a performance that had brought them their first loss.

“We put up a really good fight,” forward Molly Conn (12) said. “All we can do is learn from our loss, keep our heads high and get better.”

The loss against North Broward brings the Eagles to a 3-1 record in the season so far.

With the Eagles seeking to regain their dominance, they look towards their next away game against Coral Springs on Tuesday, Jan. 19 at 7 p.m.