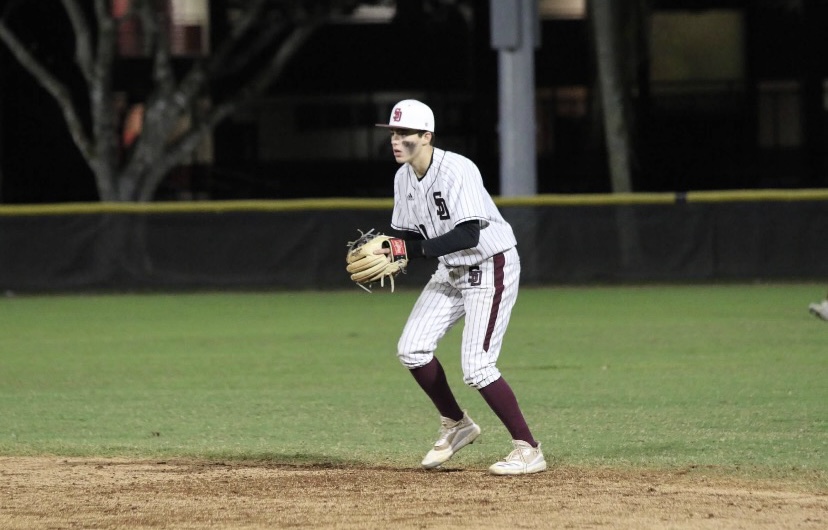 Cameron Harris, a junior at Marjory Stoneman Douglas High School, is a middle infielder for the men’s varsity baseball team. Harris was born and raised in Parkland, Florida.

Starting out his baseball career at five years old, Harris played for the Parkland Little League. His father, Ryan Harris, set the foundation for his athletic career in the baseball world.

“When Cameron was five, I was late signing him up for Parkland Tee Ball and in order to be able to play, I had to volunteer as a coach. So, I came home with new cleats and told him practice is Thursday and [that] I [was his] coach,” Ryan Harris said.

Ryan continued coaching up until Cameron turned 12 years old, which is when he began to attend Westglades Middle School, where he played for the men’s baseball team. However, Ryan Harris is continuing to work on Cameron’s fielding with him, which includes throwing pitches for Cameron during batting practice.

Continuing to strive in his baseball career, Harris made the MSD men’s varsity baseball team in his sophomore year as a middle infielder.

Now a junior, Harris has made many advancements in technique by having two years of MSD baseball under his belt. These skills include advances in hitting, catching and throwing.

Not only has Harris progressed in various skills on the field, he has also learned several lessons that he can apply to his life outside of baseball.

“Baseball has taught me so many things that have stuck with me in my daily life. I’ve gained confidence, and baseball has also taught me how to be a leader for others,” Cameron Harris said.

MSD baseball has always been very competitive, going up against multiple teams in south Florida. However, due to the COVID-19 pandemic, their fall and spring season was cut short to ensure the safety of the team as well as the coaches.

Being on the MSD baseball team during the pandemic, it has been very important to keep up with training, which is what Harris has done on his own time.

“Since the COVID pandemic hit, I’ve been training and keeping in shape on my own,” Cameron Harris said. “I workout four days a week, Monday through Thursday, and I practice baseball on various days during the week. Monday and Wednesday are all upper body workouts where I bench, and Tuesday and Thursday are heavy leg days where I squat as well as deadlift”.

When he’s not on the field, Harris occasionally plays golf and strives in his academics, maintaining straight As.

After Harris’s time on the MSD baseball team ends, his plans after high school are to play baseball in college, and to continue to have great academic achievements.

Coming back from their canceled season, Harris is looking forward to getting back on the field for tryouts for the MSD men’s varsity baseball team on Thursday, Jan. 28.