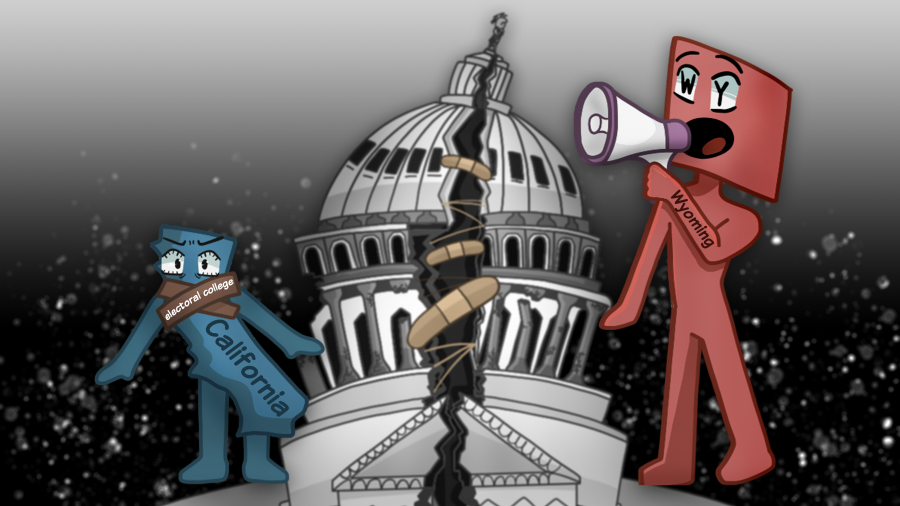 The core idea of democracy revolves around the idea of fair and equal representation; one person gets one vote. However, when voters in the United States cast their ballots every four years, their vote doesn’t count in that direct manner. This is due to the longstanding implementation of the Electoral College, a system that is both outdated and unrepresentative of the U.S. population at large.

First established in Article II, Section 1 of the U.S. Constitution, the Electoral College no longer meets the needs of our present-day society. In fact, the method of indirectly voting for the president through electors was first drawn up as a compromise after the Founding Fathers couldn’t decide if elections should be decided through a vote in Congress or a popular vote by citizens.

In the article, Wegman asserts that, “Despite what you may have learned in school, it was not the product of careful design by brilliant men. Thrown together at the last minute by the country’s founders, it almost immediately stopped functioning as they thought it would. And yet we have generally accepted it for centuries on the assumption it serves an important purpose.”

Now, over 216 years after it was first enacted, the U.S. still has not created a better and more democratic long-term solution to the Electoral College.

The Electoral College works through electors: representatives from each state that directly vote for a presidential candidate based on who the majority of people in their state support. Each state gets as many electors as it has members of Congress, composed of the House of Representatives and the Senate, adding up to a total of 538 electors.

Once you cast your presidential ballot, it is sent to a statewide tally. In 48 states, the candidate with the most votes gets all electoral votes for that state. However, Maine and Nebraska use the district method.

In order to win the election, a presidential candidate will need the vote of at least 270 electors.

Electors are chosen by each state’s political parties, though there is relatively little attention paid to who becomes one. Individuals are not chosen as a reward for being a remarkable citizen with good judgment; they are more just used as a rubber stamp before sending off their vote. This is just one part of the problem.

Looking to Missouri as an example, this system helped to select Tim Dreste, an extreme anti-abortion activist who was convicted of inciting violence against abortion providers, as an elector.

However, the main problem with the Electoral College arises with the statewide winner-takes-all laws.

Under these laws, which were first adopted to gain political advancements based on party affiliation, states give their electoral votes to the candidate that receives the popular vote in that state. This is not representative, as it results in the erasure of the other voters in the state who were not in support of the most popular candidate.

Due to this, it has become more and more likely for the U.S. to vote presidents into office who have not won the popular vote.

Looking back at the 2016 election, Hillary Clinton won the national popular vote, but Donald Trump received more Electoral College votes. If all votes were weighed evenly, Clinton would have received 259 votes while Trump would have 256, changing the entire outcome of the election. This isn’t the first time either. The system overruled the popular vote for the second time in the last five presidential elections.

No matter how much campaigning a candidate does, it can be unlikely that a state’s political affiliation will ever change. In states such as Florida and Pennsylvania, fittingly named “battleground” states, the shift of just a few hundred votes can result in a totally different winner.

The father of the Constitution himself, James Madison, determined the winner-takes-all rule to be one of the most vital flaws to the Electoral College plan. In an 1823 letter written by Madison, he argued that the rule failed to show the political diversity within each state and went as far to propose a constitutional amendment that would ban states from using it.

Another main problem with the Electoral College is the disproportionate power it gives to smaller states. This is due to states with smaller populations having a minimum of two Senate seats and one House district, meaning they will have a minimum of three electoral votes.

Katy Collin has a PhD in international relations from American University’s School of International Service. Her research focuses on the use of referendums in peace processes. She wrote an article for the Washington Post entitled, “The electoral college badly distorts the vote, and it’s going to get worse.”

In her article, Collin explains,“…if you average the 10 most populous states and compare the power of their residents’ votes to those of the 10 least populous states, you get a ratio of 1 to 2.5.”

The third issue with the Electoral College is how it takes the votes away from the roughly 4 million U.S citizens who reside in overseas territories such as Puerto Rico. While under the governance of the U.S., they lack congressional representation, thus depriving several U.S. territories the right to choose who should become the next president.

One way to take a step in the right direction towards Electoral College reform is to abolish the winner-takes-all rule. No candidate should receive all of a state’s electoral votes unless the candidate gets a majority of the state’s popular votes.

States can also adopt a system similar to that of Maine and Nebraska. In their system, each congressional district votes for an elector, with there also being two at-large state electors who are chosen through statewide votes.

Reforming the Electoral College is a non-partisan issue, due to the fact that no matter what political party an individual identifies with, their vote is not being counted in the way it should be.

Every election year, our votes go unrepresented and our voices go unheard. We need to advocate for our democratic liberties and ensure the implementation of an updated electoral system that is more representative of the wishes of the diverse populations living across the country.

This story was originally published in the December 2020 Eagle Eye print edition.