Seniors commit to their prospective colleges amid early decisions 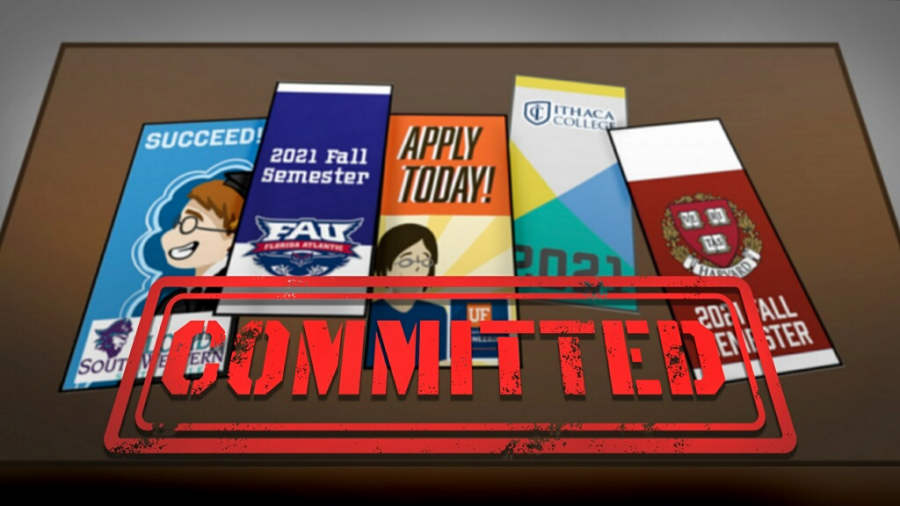 Seniors have begun to commit to colleges for the Fall 2021 semester. Graphic by Julia Landy

Committing to a college may be a difficult feat as one must weigh different qualities and negative factors. Many Marjory Stoneman Douglas High School seniors are anxiously waiting to hear back from the schools they applied to, including whether or not they received financial aid. Due to the COVID-19 pandemic, the college applications process looked quite different this year, as some students have not been able to visit a campus in person before applying. Most colleges have not yet released regular decisions, but various students have already committed to their future schools via early action or decision.

“My early commitment to Syracuse was sort of unexpected, I agreed to an early decision agreement as a part of a scholarship program called POSSE, but I’m super excited nonetheless,” Steller said. “It’s nice and relieving knowing where I’m going for sure, but it also leaves me wondering where else I could’ve gotten into.”

Steller was accepted into a five-year Bachelor of Architecture program, allowing her to grow her love of art and her desire to pursue something in STEM. Steller also looks forward to a new change in her life.

“I’m excited to see New York for the first time and be introduced to so many great peers, teachers and future architects,” Stellar said. “I’m extremely honored to be a part of the POSSE program.”

On the other hand, senior Brett Lickerman has always had his eyes set on attending Northwestern University in Evanston, Illinois.

“Northwestern was absolutely my number one choice,” Lickerman said.

Lickerman is still undecided about what he would like to study at Northwestern. His interests include engineering and business, however, he may pursue them separately or double major. Several factors contributed to Lickerman’s early decision.

“I love that Northwestern is located in an amazing area in Chicago, Illinois. Additionally, Northwestern competes in Division I sports. [They are]  in a very tough sports conference: the Big 10,” Lickerman said. “I am very excited and happy I was accepted and am going to make the most of this amazing opportunity.”

While most students are aiming to study at colleges across the nation, others have set their sights on studying abroad. Senior Anna Crean will be studying at Trinity College in Dublin, Ireland. The school has been her first choice since she was in middle school.

“I feel indifferent to my early commitment since this was my top school and I wasn’t thinking of anywhere else,” Crean said. “I’ve wanted to go to Trinity since I was like 11, and my entire family lives in Ireland so I think it’s a perfect opportunity to go ‘back to my roots’ in a way and live in a culture different to the one I have my whole life.”

For Crean, Trinity College is the best college in Ireland and it has exemplary sister schools, like Cambridge and Oxford.

“I love the program I’m able to take. It’s not in American schools and I don’t have to do random basic topics like biology or reading when I don’t need it for my future,” Crean said.

Crean already knows what she will study and is looking forward to doing so.

“In Ireland you have to pick your major before getting into the school. You basically apply for the major, not the school, so I’m doing a quadruple major program in philosophy, political science, economics and sociology,” Crean said.

MSD students and staff alike look forward to seeing the decisions of students and to what the future holds for them. As more admissions letters come in, more students will choose their next four years, furthering their journeys after high school.