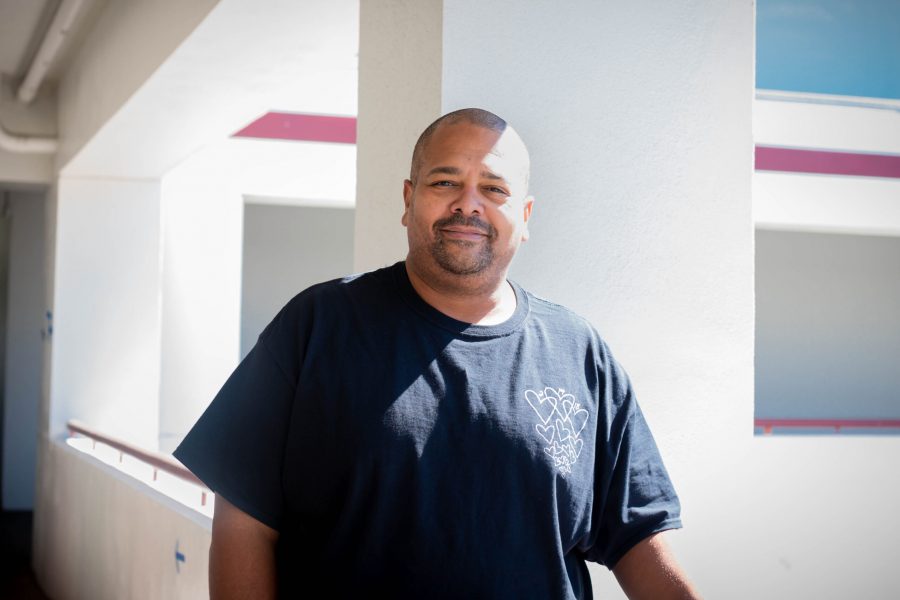 Sean Simpson, chemistry teacher at MSD, chosen as the Featured Artist at the Parkland Library. Photo by Mariajose Vera.

Sean Simpson, one of the chemistry teachers at  Marjory Stoneman Douglas High School, was selected as the Featured Artist of the Month at the Parkland Library for February. Every month, the Parkland Library displays a local artist’s work in their newly renovated art exhibit. Simpson’s photography was chosen to be featured after astronomy teacher Kyle Jeter suggested him as a candidate. Simpson does a variety of photography, however, the collection on display features his architectural landscape photos.

In 2019, the Parkland Library went under heavy expansion renovations, which resulted in the rearrangement of the library’s various wings. This ultimately left space for an art exhibit. A grand opening was held in March of 2020; however, COVID-19 delayed their ability to show off the space to the community.

Now every month, Library Program Coordinator Rhonda Weiss chooses a new local artist to display their art in the exhibit, with some pieces occasionally scattered throughout other parts of the library.

“We reach out to [the artist] usually [and] try to mix up the different media from month to month,” Weiss said. “We [have had] people do painting, photography, quilting, you know all different things.”

Kyle Jeter, the astronomy teacher at MSD, has a part-time job at the Parkland Library. When he heard they were looking for the next month’s artist, he suggested Simpson.

“I’m always very impressed with Mr. Simpson’s work as a photographer, he has a great eye, he always finds interesting photos, he always looks for the right lighting, everything has to be [just right,] he’s a perfectionist on that,” Jeter said. “He’s one of my best friends, I knew that he was very talented. I’ve seen many of his pictures so I knew that would be a good fit for the library.”

Simpson has been doing photography for almost his whole life after first being introduced to it by his uncle. His passion grew from there as it was a way for him to relax. He began taking photos of everything, like road trips he takes with his daughter.

Simpson and his daughter have driven to almost all 50 states, with Oregon and Washington left. He takes photos of birds, macro water droplet shots, bison, eagles, moon and astrophotos with Jeter, architecture photos and more.

Simpson’s photography was initially just for fun and relaxation, but after people said he needed to share it with others, he began to take his artwork to shows and exhibits. Simpson has been in other libraries and exhibits before, including the African American Research Library and Cultural Center in Fort Lauderdale last year and Art Basel in Wynwood of Miami. He has also attended a multitude of art shows.

“The photography part was a love, it just came about,” Simpson said. “I’ve never considered myself an artist for a long time [until] other people kept saying it’s beautiful. I never really showed a lot of the work, I just did it for myself.”

Additionally in 2018, Simpson began framing his artwork himself for his shows. He makes his frames by taking 15,000 volts of electricity and shooting it through the frame to give a crackle-like look. As an artist, he strives to make each frame unique and different. Sometimes to fit with the photograph, Simpson will cover the frame in an epoxy of multiple colors.

“The frames came about in downtime after the [shooting] here, I needed a way to release stress and I started to think about how I was gonna frame some of the work that I was showing,” Simpson said.

Furthermore, being chosen as February’s Featured Artist was very special for Simspon because it is also Black History Month. Coincidentally, this was around the same time as last year his art was displayed in the African American Research Library and Cultural Center.

Simpson’s work can be seen at the Parkland Library from 10 a.m. to 5 p.m. from Mondays through Saturdays all throughout February. The majority of his work is in the art exhibit section of the library, but some of his pieces can be found scattered in other sections. For more information about hours, visit the City of Parkland’s website.