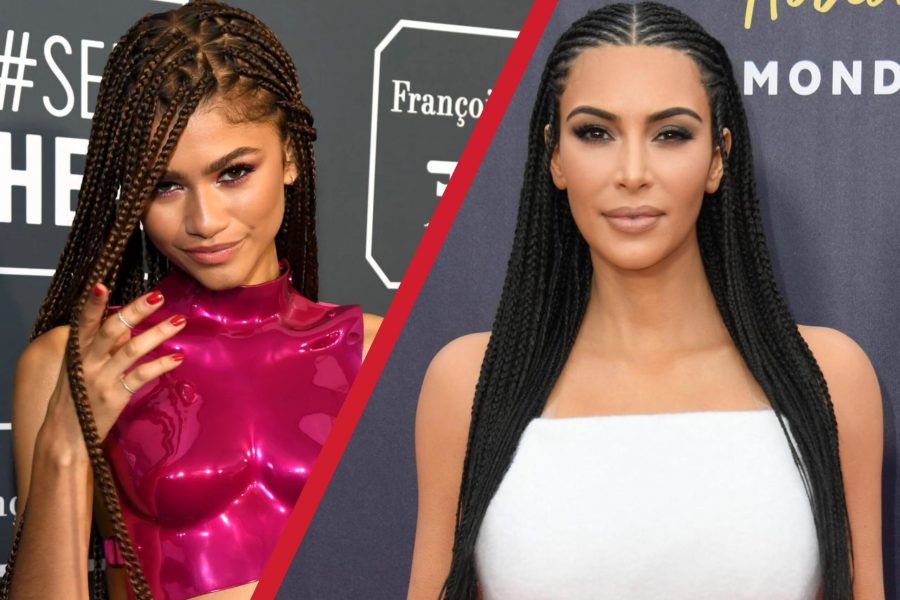 Zendaya Coleman and Kim Kardashian side by side donning hairstyles typically seen in the Black community. Photo illustration by Melodie Vo

The main difference between cultural appropriation and appreciation is whether someone deliberately claims a cultural aspect from another culture, rather than respecting the beauty of it and giving credit to who it comes from.

Cultural appropriation is taking something from another culture that you have no understanding of and not giving that culture credit. Most people often rename and redefine these cultural pieces and what it symbolizes by treating it like a costume.

Individuals who have no understanding of a culture’s history, freely use cultural pieces and get credited for it while those actually from the culture are still actively being discriminated against through bullying, hate speech and harassment.

As defined by Dictionary.com, cultural appropriation is “the adoption or co-opting, usually without acknowledgment, of cultural identity markers associated with or originating in minority communities by people or communities with a relatively privileged status.” In present culture, it is much more than that.

Some examples of cultural appropriation include non-Africans wearing box braids and non-Asians doing “fox-eye” poses by pulling their eyes back. This affects others by showing that their cultures are merely a costume or makeup that can easily be taken.

Box braids were used as tribal customs in Africa, more specifically to indicate which tribe they pertained to. Additionally, cornrows were found in paintings from years ago of women with this hairstyle. This type of hairstyle currently remains a popular hairstyle throughout their culture, and if those of other races just blindly start wearing them, it removes its meaning and context.

The fox eye trend is disrespectful towards the Asian community because it mimics the look of their eyes. This is being done by many people and Asians are shamed for their eyes but when it is done by others it is beautiful and trendy.

Some people take other cultures into their hands as a trend or an “aesthetic” style, which it is clearly not.

Appreciating a culture includes being informed on the background and impact it has had on the culture and enjoying it with others. For example, when you try a recipe from a different culture or country, try to learn about the history of the food and be respectful.

Many have respectfully taken part in the music, clothing and foods of other cultures and made sure they were educated in what they were taking part in.

Another harmful instance is when the cultural traditions of people of color are shamed by others until it is done by a white person. On social media forums such as TikTok and Instagram, many people actively make fun of black women for wearing acrylic nails by calling them “ghetto”, but praise white women when they wear them and label it as stylish.

A distinctive example of this are the Kardashians, who have continuously taken things from  Black culture and used it as if it was theirs. When Kim Kardashian wore cornrows it was seen as stylish or elegant but when Zendaya wore dreads she was claimed to smell of patchouli and many other stereotypical things. And with the Kardashians being in the media, their misguided actions influence others to do the same lacking cultural context.

Another example is when people wear costumes resembling traditional Indigenous outfits. In 2016, Hillary Duff and Jason Walsh dressed up as a Native American and a Pilgrim. This is highly offensive as they are taking something that isn’t theirs without knowing the cultural impact. They faced consequences in the media as others called them out.

When celebrities appropriate a culture and face little to no consequences it encourages this behavior. It is so crucial that individuals educate themselves on different cultures as to not offend or appropriate others.