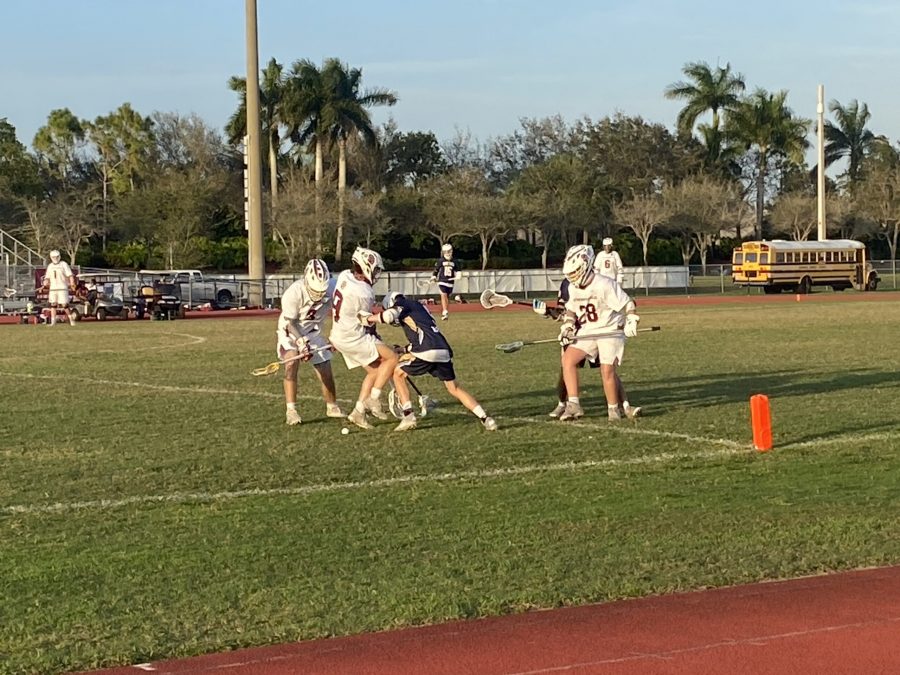 Scooping and Scoring Three offensive players of the MSD men's varsity lacrosse team battle with an opposing West Boca Bull to gain possession of a loose ball. The Eagles went on to win the game 21-3. Photo courtesy of Reece Gary

Scooping and Scoring Three offensive players of the MSD men’s varsity lacrosse team battle with an opposing West Boca Bull to gain possession of a loose ball. The Eagles went on to win the game 21-3. Photo by Reece Gary

The Eagles had practiced for a couple of weeks prior to the game and focused on performing to the best of their ability as the season approached. Anticipation for the game grew among players, coaches, and fans as it was unknown whether the season would play amidst the COVID-19 pandemic.

A big scare occurred when an athlete on the men’s varsity lacrosse team was diagnosed with COVID-19, which resulted in the team not being able to play for two weeks. Not knowing whether they would be allowed to have a full season, the Eagles could only look forward to their first game after the situation was cleared and it was safe to play.

As the game approached at 5 p.m., the Eagles and West Boca Bulls took the field at Cumber Stadium of MSD for the beginning faceoff. Powering through the opposing stick, the Eagles were able to recover the ball and gain the first possession of the game.

The Eagles’ rigid preparation allowed them to keep the ball near the opposing net for a large portion of the game’s start, as they hustled and passed in order to find an open opportunity to score. Eventually, that time would come as attackman Darren Edenbaum (8) snuck past defenders to score.

Soon after letting Edenbaum score the first goal, the Bulls let him get past again. The Bulls’ defensive mistake led to Edenbaum quickly scoring another goal to give the Eagles a very early 2-0 lead.

Edenbaum’s two goals served as a significant momentum boost for the Eagles, of which they took advantage of. The Eagles kept pressuring the Bulls’ defense throughout the first quarter and were able to finish the period with a score of 8-0.

Heading into the second quarter, the Eagles saw little obstacles in their path to extend their lead and applied nonstop tension on the opposing team. Through well-executed assists and checks, the Eagles repeatedly found the ball into the back of the Bulls’ net throughout the rest of the half.

This included an assist and goal by attackman Ty Stevens (31), who helped maintain the Eagles’ dominant lead.

“I played really well, and did everything I was supposed to,” Stevens said. “Everyone on the team did their jobs and worked together. That’s how we won.”

The Eagles defense received little action throughout the game as they only allowed the Bulls to score twice. There was no stopping the Eagles’ forceful playmaking on the field before halftime, and as halftime approached, the Eagles established goals to stabilize their large lead of 14-2 the rest of the game.

The Eagles didn’t seek extra motivation in order to pull through a tight game because of their extensive lead. However, this didn’t distract them from executing on the field, as they entered the third quarter with the same approach as the first.

Thus, the Eagles’ second half evidently showed similar, if not better, results to the first as they took every opportunity they got to score. Communication and hustle were seen throughout the Eagles’ roster, and the team clearly outmatched their opponent.

“I think we played great. We listened to the coaches, ran through our plays, and got everything done,” midfielder Nathan Kavanaugh (9) said.

As the third quarter transitioned into the fourth, the Eagles continued their domination by scoring many more goals. Eventually, the Eagles’ ongoing ascendancy came to an end as the final buzzer rang.

The Eagles celebrated their outstanding first game of the season, that of which ended with an incredible 21-3 victory.

The Eagles’ next game will be played away against Taravella High School at 5 p.m. on Friday, Feb. 19.