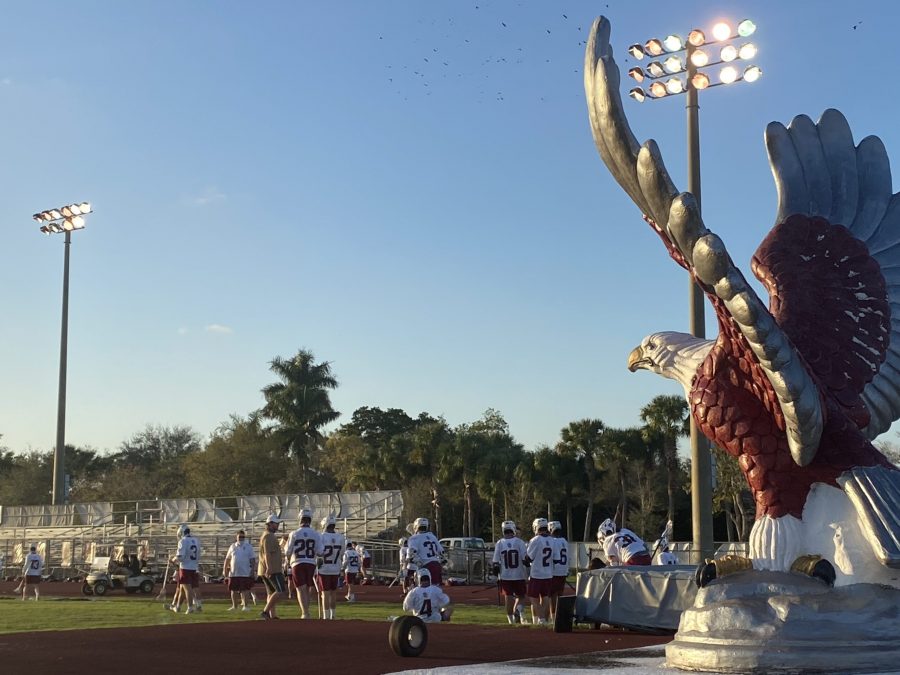 Soaring to the Second Half The MSD men's varsity lacrosse team hustles back to the field after their team huddle during halftime against the Coral Springs Colts. The Eagles would finish the game winning by a score of 21-1. Photo courtesy of Reece Gary

Soaring to the Second Half The MSD men’s varsity lacrosse team hustles back to the field after their team huddle during halftime against the Coral Springs Colts. The Eagles would finish the game winning by a score of 21-1. Photo courtesy of Reece Gary

On Monday, Feb. 22, the Marjory Stoneman Douglas High School men’s varsity lacrosse team prepared for a matchup against Coral Springs High School with hopes of extending their undefeated record of 2-0.

The Colts were entering their first game of the season with hopes to strip the Eagles of their undefeated title and claim it themselves.

As game time approached, the Eagles and Colts took the field and set up for the faceoff. At 5 p.m., the referee dropped the ball in the field’s center, and the Eagles scooped up the ball to gain the first possession.

The Eagles quickly made their way to the opposing goal, as they passed to look for a scoring opportunity. That moment came when attackman Darren Edenbaum (8) snuck through the Colts’ defense to give the Eagles a 1-0 lead.

Per usual, the Eagles soared through the first quarter by putting continuous pressure on the Colts’ defense. By the end of the quarter, the Eagles obtained an 8-0 lead.

To help give the Eagles an early lead, midfielder Ryan Patton (22) roped the ball through defenders into the upper left corner of the net to score.

After the game, Patton reflected on the team’s performance with positive remarks. He believed the team played extremely well, and their skilled ball possession greatly contributed to the team’s victory.

Midfielder Simon Miller, who would later earn the title of Player of the Game for his relentless effort, scored one of the Eagles several goals in the second quarter

Eventually, halftime approached with the Eagles owning a 14-0 lead. This was the Eagles’ largest lead at halftime of the season thus far.

Although they had a substantial lead, coaches and players of the Eagles roster acted as though the score was still 0-0, and the team focused on playing just as hard in the second half.

The Eagles’ persistence on the field allowed the third quarter to come hard for the opposing Colts, as they were unsuccessful in maintaining offensive possession for enough time to score.

On the other hand, the Eagles proved to be the better team as they scored multiple goals to take their lead to 18-0.

With a sufficient lead, the Eagles were able to enter the fourth quarter with no worries of falling short. Meanwhile, the Colts saw this as an opportunity to prevent the game from becoming a shutout.

The Colts took advantage of their opportunity, scoring a single goal to avoid the shutout. While it didn’t mean much to their record, the Eagles were disappointed that they couldn’t keep their opponent at 0.

Nonetheless, the Eagles continued to score until the final whistle blew, finishing by a score of 21-1.

The Eagles’ many goals included a score by attackman Jerry Thomas (4), who flung the ball past the Colts’ goalie to score.

“We could always play better, but we still played good,” Thomas said. “Ball movement is what we did best.”

The Eagles temporarily celebrated their win, but looked forward to their next game on Friday, Feb. 26, in which they played the Saint Andrews Scots at 5 p.m.

On Friday, the Eagles made their way to face the Scots without the luxury of having home-field advantage. While this factor didn’t make a difference in their recent matchup against Taravella, the Eagles still prepared to fight for victory.

As the first quarter approached, the Eagles were off to a slow start. Struggling to maintain effective possessions, the Scots worked the Eagles like no team had in the season thus far.

By the end of the quarter, the Eagles trailed by a score of 3-0, which was their first deficit of the season.

The Eagles had proved to be a predominantly strong team throughout the early stages of the season, but their momentum seemed to fall apart as Friday’s game progressed.

They were brought into another difficult situation in the second quarter, as they scored no goals themselves, but allowed the Scots to score four times.

Down by a score of 7-0 at halftime, the Eagles looked to make changes. With the Eagles’ chances of maintaining their undefeated record fading, the push towards victory in the second half would be a strenuous uphill battle.

The third quarter struck with the Eagles’ offense finally finding their rhythm to score three goals. While they still had goals to makeup, the Eagles continued to strive towards the finish line.

However, the Scots were focused on keeping their lead and winning the game. By taking advantage of the Eagles’ struggling defense the Scots outmatched the Eagles in the third quarter, scoring another four goals. This brought the score to 11-3 entering the fourth quarter.

Making a last-resort push to make up lost ground, the Eagles tightened the opposing team’s offense by limiting them to only one goal in the final quarter.

Nevertheless, the clock ran down before the Eagles could take a lead. The Eagles managed to match the Scots in the fourth quarter by only scoring one goal as well.

The game finished by a score of 12-4, and the Eagles hustled off the field with disappointment.

As their undefeated record diminished, the Eagles had evident improvements to make before their next game and the rest of the season.

Moving forward after the loss, the Eagles’ next game was away at North Broward Prep High School on Monday, Mar. 1 at 7 p.m.