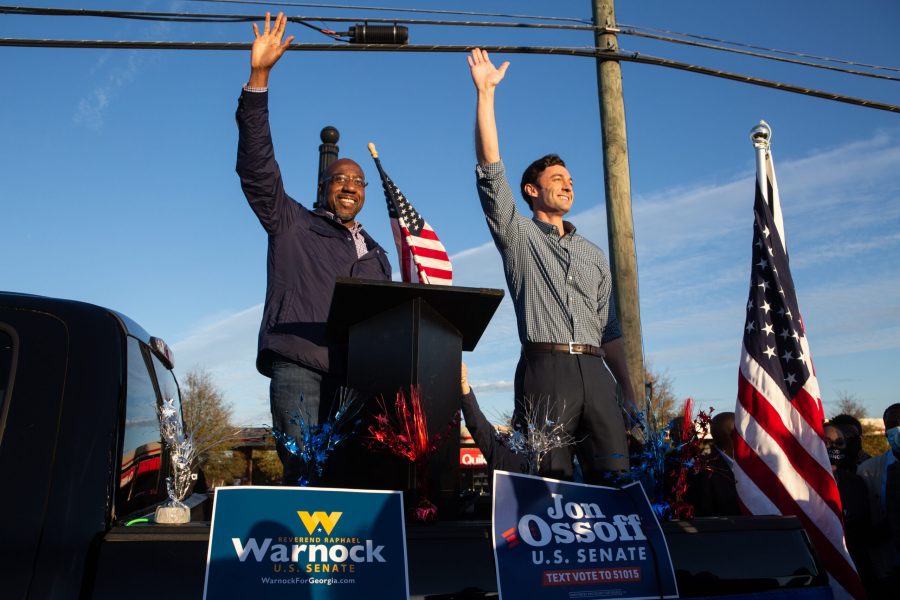 Warnock faced Loeffler, who was appointed by Georgia Gov. Brian Kemp, to fill the seat of Johnny Isakson. Ossoff went against Perdue, an incumbent that has served in the Senate for six years.

Warnock’s win is especially notable since he is the first black Democrat to be elected to the Senate from the South and one of just 11 African Americans to ever serve in the Senate. During his victory speech, he spoke on how he ended up in this position and how his mother grew up in the South as a teen.

“The other day, because this is America, the 82-year-old hands that used to pick somebody else’s cotton went to the polls and picked her youngest son to be a United States senator,” Warnock said. “I stand before you as a man who knows that the improbable journey that led me to this place in this historic moment in America could only happen here.”

These Senate wins transpired after record-breaking voter turnout last November, which carried over to the state’s runoffs in January of 2021. Runoff elections in Georgia have been known to have a much lower turnout and typically don’t go well for Democrats, but that was not the case this year, with over 4 million votes cast to ensure Georgia’s blue flip.

These Democratic victories in Georgia have been a part of a larger initiative to flip the state blue, which has been going on for years. Figures like Stacy Abrams and other volunteers, canvassers and organizers have been working to make Georgia a Democratic state, finally achieving it in this recent election.

Georgia’s election quickly gained national attention as these two races would decide what political party would hold the Senate majority. The attention led to many big names campaigning in the state, such as Barack Obama and Joe Biden, who came to support Ossoff and Warnock. Mike Pence additionally came to support Loeffler and Perdue.

The new Senate majority will allow Democrats to pass key legislation without bipartisan support using budget reconciliation, which allows legislation to be passed easily with just a simple majority instead of 60 votes.

Democrats now have control of the White House, the Senate and the House of Representatives for the first time since 2010, Barack Obama’s presidency. This gives Democrats the chance to pass plans such as COVID-19 relief, $2,000 stimulus checks and other progressive agenda items.

For the next two years, Democrats will have to show what they can get done while they have full control of Washington, D.C. Many Democrats are concerned that if they don’t follow through on promises and take bold action, they will lose control of Congress in the 2022 midterm elections.

Undoubtedly, Warnock and Ossoff’s victories in Georgia have been a historical feat that will allow the Biden administration to hit the ground running.