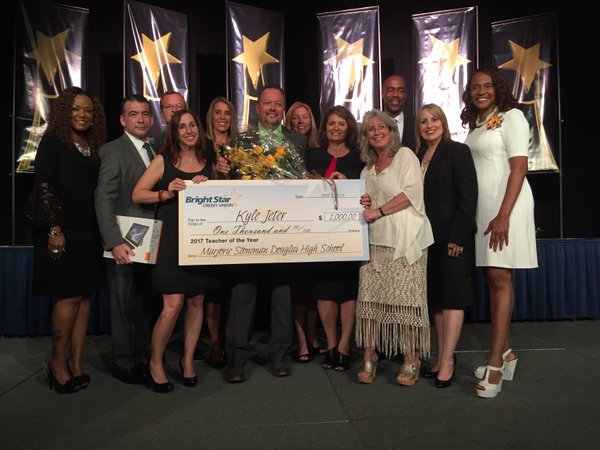 Jeter accepts cash prize of $1,000, the monetary award for being named Broward County Teacher of the Year.

In 21 years, a lot has changed on the Marjory Stoneman Douglas campus; a new Freshman building created, a track and tennis court added, the junior lot moved. But, one thing has remained- the presence of Astronomy teacher Kyle Jeter on campus. In his 21 years at MSD, Jeter has taught students from the likes of current English teacher Ariel Hertz to state Rep. Jared Moskowitz. And despite the fact that Jeter taught Physics and not Astronomy in the early days of his career, his passion for teaching and great reputation has been a clear continuity on campus.

And these qualities have been recognized as Jeter was named the 2016 Broward County Teacher of the Year at the April 1 Caliber Awards (an event sponsored by Bright Star Credit Union). In addition to his title (and bragging rights), Jeter received a cash prize of $1,000, a commemorative ring and a gift basket.

“It is extremely exciting,” Principal Ty Thompson said. “This is the first time in MSD history that we have had a Broward County Teacher of the Year.”

the 2015-2016 Teacher of the Year at MSD, an annual competition. Upon this, Principal Ty Thompson suggested that Jeter push for the district award next.

“The school anyone can nominate anyone [for MSD teacher of the year] and then we take a vote in the fall,” Jeter said. “I was thrilled to win. It was my twenty-first year at Stoneman Douglas- the only school I’ve ever been to. It was such a great honor, I was so happy to get that. And then it was funny because Mr. Thompson pulled me over to congratulate me on winning. He said, ‘Oh by the way there’s some homework involved with this and just kind of laughed.”

Indeed, work was involved. As part of the application process, Jeter wrote six essays (which took him a weekend at the library) and submitted three letters of recommendation (one from his mentor Physics teacher Jeff Rosen, one from a former student who is a current aerospace engineer and one from Thompson). According to Jeter, the process lasted a few months. He wrote the essays in Oct. or Nov. and the rest of the application was completed in the time following.

Shortly thereafter, Jeter discovered he had made it into the top 11. He was then subjected to a “grilling” in which various big names in education (last year’s teacher of the year, several principals and Bright Star Credit Union representatives to name a few) interviewed the finalists one at a time.

“It’s a little bit scary,” Jeter said. “You walk in and there was a big conference room table and there were ten people asking questions. It was like an interview process. It’s a little intimidating but it was fun.”

From there, the pool was narrowed to six. As part of the top six requirements, Jeter had to record and submit 20 minutes of uninterrupted class time.

Then came the Caliber Awards April 1 at the convention center. About 900 were in attendance, and Jeter had quite the cheering section. In addition to his parents who came in from out of town to attend and his friends from the science department, Thompson, Assistant Principal Jeff Morford and School Board Member Abby Freedman were in the audience in support of Jeter.

At the end of the ceremony, the Teacher of the Year Award was announced. While Jeter had pre-written a speech (as the top six finalists were recommended to prepare a concise speech), he was still surprised to see that he had won.

“Total shock,” Jeter said. “I was in total shock when they announced that I had won. You have a one in six chance to win. I was just shocked and happy, and I was happy to have my parents there, who are both teachers. I wanted to come through for them, and all those who were in the audience for me.”

Others had similar reactions, including Thompson.

In his acceptance speech, Jeter thanked his parents-veteran teachers for inspiring to pursue the profession. However, according to Jeter, he was so stunned that he did not get the chance to thank some of his colleagues in depth. One of these such people is fellow science teacher and collaborator Sean Simpson. Without the help of Simpson, Jeter claims that he would not have been able to run programs (such as Astronomy stargazing nights) as smoothly.

“I’m just very glad that he is getting recognition for all of his hard work,” Simpson said. “He deserves all of the praise he’s getting.”

Since winning Broward County Teacher of the Year, Jeter has been very busy. During the summer, he will take the long haul up to Orlando to attend a state event in which winners from other districts will have a chance to discuss their thoughts on the profession and the future of teaching. He has also been recognized at various local luncheons and dinners.
“I’m happy that I have the opportunities to share my thoughts with others because of this award, and that I have the chance to confer with other great teachers about what we can do to collectively better the state of education,” Jeter said.