Senior Adam Hauptman dedicates his life to hockey and his team 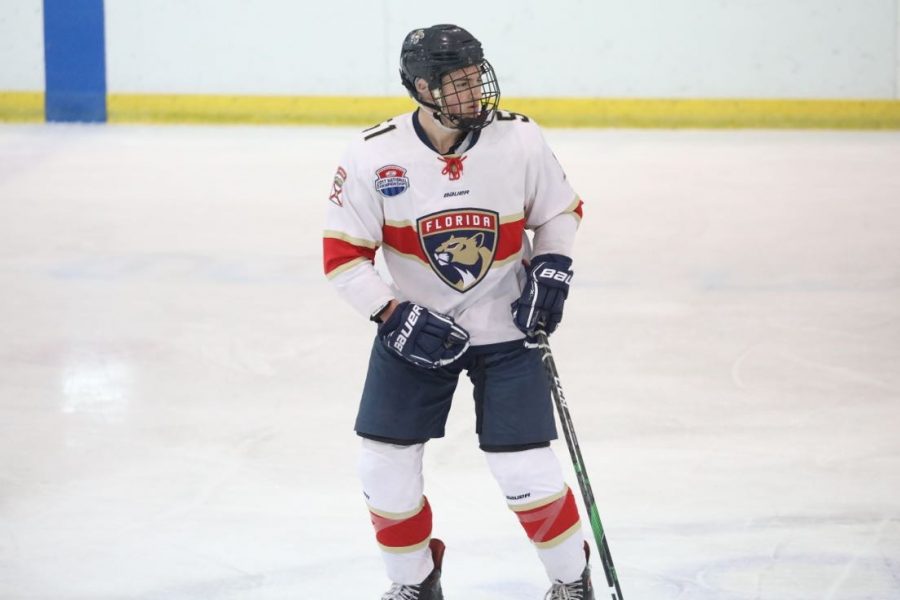 Photo of Adam Hauptman on the ice playing hockey for his previous travel hockey team, the Junior Panthers. Photo provided by Adam Hauptman

Connor Lieberman, Writer
Senior Adam Hauptman, a center for the Marjory Stoneman Douglas High School hockey team, is looking forward to a not so fortunate senior season. He started playing hockey when he was two years old.

“I first learned to skate at two years old and was playing recreationally in preschool then I played on my first travel team in kindergarten,” Hauptman said.

Hauptman’s inspiration for playing hockey comes from his older brother, Matt. While Adam Hauptman was a freshman playing for the varsity team, his brother was a senior playing right along with him, teaching him the ropes.

“Being able to win a state championship my freshman year when he was a senior was an unreal experience that I will always cherish,” Hauptman said.

When asked about some of his favorite memories and moments while playing hockey, Hauptman brought up his freshman year.

“The tournament most notable to me is States from freshman year in 2018 because just 11 days after the shooting we won the championship,” Hauptman said.

Hauptman has always been a team player and believes that a win comes first. Over his four years playing with the Eagles, Hauptman was able to aid his team to multiple victories. With their countless triumphs, the MSD team’s dynamic is unmatchable and the chemistry between all of them is unbeatable.

“On our team, no one role is superior or better than another and because of that, respect for one another is important,” Hauptman said. “At times tempers flare and emotions rise, but that respect for each other makes us stronger and tighter as a group in the end.”

Out of Adam Hauptmans four years playing for MSD, one of his favorite games was last year against Cypress Bay High School. Although the score at the end of the game wasn’t what they wished for, the experience of the crowd size was immaculate.

“Last year we had a game against Cypress Bay that had quite a large crowd size. Although we didn’t win, playing in front of that many of my fellow eagles was very exciting to say the least,” Hauptman said.

Adam Hauptman was chosen as captain last year by the team and coaches, and he wore that “C” with pride. He led the team with the most points this season and finished with the third-most points in the league. When asked what words of encouragement he would give to future freshmen, Hauptman said this.

“Play for the logo on your chest and not the name on your back, also fight for your teammates as some of them may never play again,”

Hauptman is still hopeful to play hockey after high school, whether it is for a college or a league up north he will give it his all just like he did for the MSD hockey team.