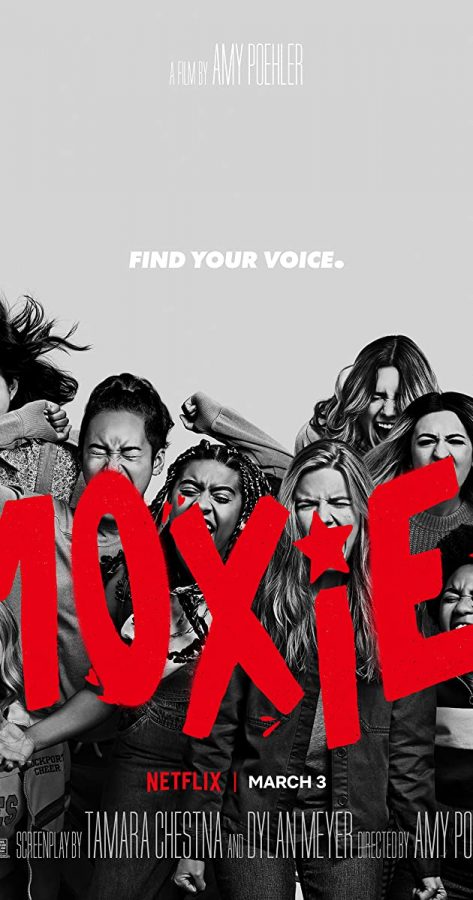 'Moxie' features a main cast of six girls, all of whom are a part of the Moxie group.

“Moxie,” a movie directed by Amy Poehler, was released on Netflix on Wednesday, March 3. It is made to be a teen movie that teaches young girls about modern intersectional feminism and riot grrrl culture.

“Moxie” follows Vivian, played by Hadley Robinson, who basks in complacency at her school and lives with her ex-punk feminist mom Lisa, played by Amy Poehler. After Lucy, played by Alycia Pascual-Peña, transfers into her school, Vivian begins to question the authority of her school.

Lucy actively stands up against the school’s two sexist jocks and the unfair social standards pushed by a disgusting list that objectifies the girls. This inspires Vivian to go back home and uncover her mom’s old punk feminist paraphernalia, leading Vivian to make her own zine. This zine becomes “Moxie,” and a series of events follow to start a movement at school.

One of the largest issues with this film is that when trying to focus on the specific topics targeted in the plot, all of the issues are very surface level. Amy Poehler was attempting to create a modern take on teenage feminism but instead lost out on the chance to speak on more important topics in the world.

The film focuses mainly on issues that are supposed to be relatable to a wide variety of girls in school; however, it neglects many opportunities to get into more serious discussions.

The issues focused on were very specific to Vivian and the very small realm of diversity she knew of. This could be good for girls who relate to her of course, but it doesn’t provide much comfort to those who suffer from other issues.

Since the movie comes equipped with such a diverse cast, it could have been productive to introduce more race and sexuality-based social issues to the film, instead of mentioning them in passing lines.

Lucy, Amaya, Kiera and Claudia were all minorities who could have had their own arcs pertaining to race-based issues, and Lucy and Amaya were both members of the LGBTQ+ community. If the film had decided to focus more on these characters and their personal issues, the activism in this movie would have seemed less childish and more powerful.

The movie instead decided to focus on a white, straight girl instead. There is no issue with Vivian being the main protagonist, but it seems like an odd decision since the film seemed to want to focus more on intersectional feminism.

One of the big points in the movie made by Vivian’s mom is how her past feminist group wasn’t intersectional enough. This scene gave a perfect setup for Vivian and her group to focus on more important issues pertaining to other members of the activist group but instead focused on issues like dress code and unfair principles.

With such a diverse and interesting cast of side characters, it seems like a missed opportunity to choose to ignore these issues in lieu of focusing on generic and childish problems. There was no point in bringing up the aspect of intersectional feminism for the movie to completely disregard it in the following events within the film.

Although “Moxie” has many issues with portraying actual feminism, there is still an extremely enjoyable aspect to the film: the punk influence. Since the film is supposed to be heavily influenced by the riot grrrl movement of the 90s, there are quite a few references to the era in the film.

Among the most notable are the zines Vivian makes in the movie and the music that scores the whole film.

Although there is a lot of punk music in the film’s soundtrack, the most well-known is “Rebel Girl” by Bikini Kill. The song is played multiple times in the film, from the moment she discovers her mom’s feminist memorabilia to the celebration held at a retirement hall. Bikini Kill’s loud, messy and powerful sound leaves a memorable imprint on the film, which allows you to remember its key points.

Zines are small-scale, non-commercial pieces of work that are usually self-published in small batches. They are usually produced through creating one “master flat” (original copy) and then photocopying and binding the copies, but there are no true rules for how to create zines.

Zines were originally popularized in the 70s punk scene, pushed by outspoken political commentary, rock and roll music critique, drug influence and the changing from big brand to self-produced art and commentary. In the 90s, riot grrrl groups like Bikini Kill and Jig Saw began to produce their own punk feminist zines, inspiring an explosion in the popularity of zines for young women and girls.

The zines Vivian makes to start “Moxie” also played a large role in 90s punk feminism, made commonly by small groups and individuals who wanted to make a statement. Although they are much harder to make than it seems in the movie, zines still play a large part nonetheless.

Although there are many issues with the feminism portrayed and the characters in the film, the music and punk influence still make it an enjoyable watch. There is no pretending that “Moxie” is perfect, but there is also no problem with enjoying the movie in the end.