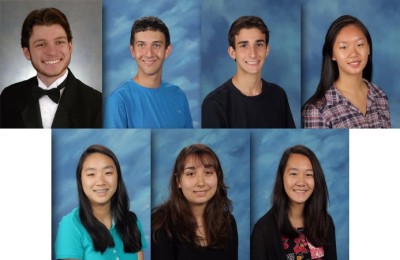 This past month seniors around the country found out whether or not they passed the cutoffs for the prestigious National Merit Scholarship, for which they took the PSAT last fall. Out of the 1.5 million students who took the test, 34,000 were given “Letters of Commendation” in order to recognize their success, and another 16,000 qualified as semifinalists for the scholarship. Each state has its own specific cutoff score, with Florida’s standing at 214. Despite the relatively high requirement, 810 out of the 16,000 students selected were from Florida – seven of them from our very own Stoneman Douglas: Max Baron, Brandon Dubner, Drew Fletcher, Katherine Liu, Jessica Pan, Elisabeth Rodrigues and Joanna Zhuang.

The committee will soon choose about 15,000 to move on as finalists, and from the remaining group, roughly half will each receive the prize – the National Merit $2500 scholarship, as well as varying amounts of college and corporate-sponsored awards.

“We all just submitted our applications to be selected as finalists the other day,” says Senior Joanna Zhuang. “I think that all of us will make it as finalists, and that at least a few of us will receive the scholarship.”

Max Baron, another semifinalist, shares different sentiments about the students’ chances at the award.

“Truthfully, I didn’t think I’d get this far. I was told beforehand that I could only get three problems – or some other crazy number – wrong on the test to even have a chance at qualifying, and I had only taken the SAT for the first time the week before; the format was new to me. So going into it, my expectations were pretty low,” says Baron. “As for my chances in advancing, I don’t have the greatest confidence that I’ll receive the scholarship, but obviously I’m still anxious to know.”

“I feel they need to change how semifinalists are selected – the different state cutoffs should be unified for sake of fairness. To me, that was the most unfair part of the award, because where you live could ultimately determine whether or not you qualify.”

The cutoffs ranged greatly: New Jersey’s -the highest in the country- was 225; North Dakota’s was only 202. It is obviously a fairly reasonable concern, but all seven students were definitely grateful that they had passed Florida’s score.

Katherine Liu, for example, got a 215 – just one point above the state requirement.

“To prepare for the test, I just did a whole lot of practice questions and went through test after test,” Liu shares. “I still felt a little on the fence when the actual test finally came. Confidence wasn’t the issue; I thought my score would be good, but not “National Merit” good.”

Baron, Liu, Zhuang, and the other four students will find out next February whether or not they have been chosen as finalists, and will be told between May and June if they are among the 7,400 National Merit Scholars.