A great night for Democrats- it’s not debatable 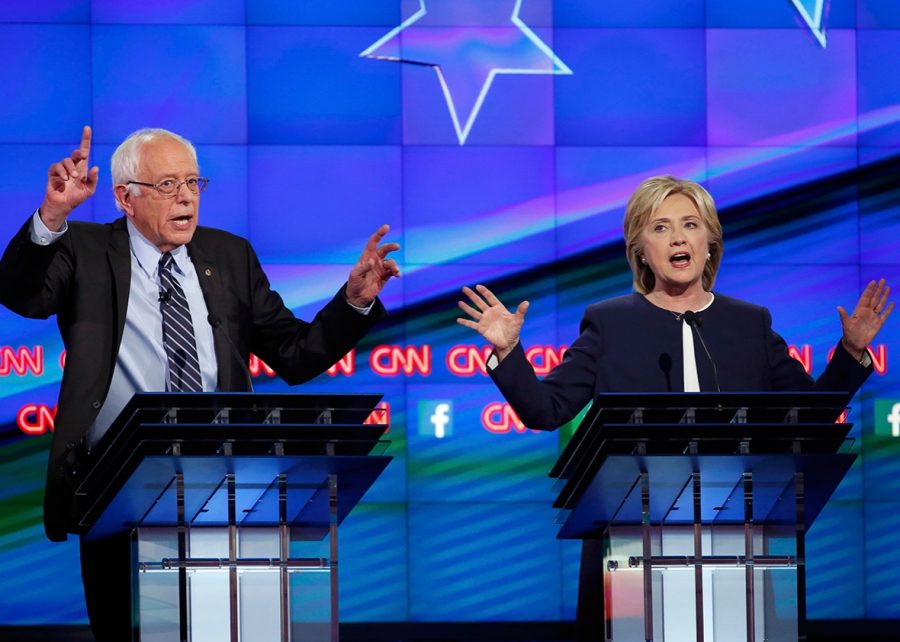 It was a record breaking night for the Democratic party- 15.3 million people tuned into CNN to watch the first of the Democratic debates Tuesday Oct. 13, not counting the 980,000 who accessed online streams. 4.8 million of these people were between the ages of 25 and 54, the highest viewership ever for a Democratic debate in that age group. This debate which was sponsored by Facebook, was moderated by CNN’s Anderson Cooper and featured presidential hopefuls Lincoln Chafee, Hillary Clinton, Martin O’Malley, Bernie Sanders, and Jim Webb.

Candidates were positioned on podiums based on popularity in polls. Since Sanders and Clinton are the most popular of the Democratic candidates, they were placed in the middle. The debate started with each candidate delivering a two minute introduction to their platform. Copper then proceed to question each candidate about problems they may face with voters. Of the responses, the most memorable was Sander’s assurance that his socialistic views were an asset rather than a drawback.

The debate quickly switched gears in the directions of gun control. Clinton was obdurate in her insistence to take on the NRA and the GOP over this issue and Sanders, who was under fire for his vote against the Brady Bill seemed mixed and ambiguous about his plans with gun control, yet brought up the point of mental health evaluation as an answer to this issue. To prove his point, O’Malley referenced the strides he took to evaluate gun violence in Baltimore as comparison to what he wants to apply on national level. Regardless of the differing plans, all candidates agreed that gun control is an issue that must be addressed.

“As a Republican, I didn’t agree with everything said at the debate,” junior Emilia Thom said. “But I think that what was discussed about gun reform was important and very relevant.”

Cooper proved to be an effective moderator. His questions were witty and relevant; he kept each candidate on track by reminding them of the questions they were asked, and of their time constraints. Still, the debate seemed two sided- featuring mostly Sanders and Clinton. Although they appeared to be the clear frontrunners of the Democratic party, even Webb noticed the focus on them, and called Cooper out for the lack of time he received to talk. Webb seemed miffed about his dismissal from the debate.

“I wish I heard more from Webb, O’Malley, and Chafee,” freshman Ari Goldwin said. “I enjoyed what Webb said about our relations with China, but I barely heard from him. I wanted to have more of a chance to hear from the lesser known candidates; I really only know about Hillary and Bernie.”

Climate change was also discussed. Sanders led on this issue, citing it as the biggest threat to our future. In addition, Sanders discussed his all inclusive Medicaid system and free college education plans. In this debate, he showed his passion for addressing the core issues of his campaign: income inequality and the reckless behavior and excesses on Wall Street. Since he has not received much media coverage this campaign, Sanders gave potential voters an accurate and positive glimpse of his political style.

“I agreed with everything Sanders said,” junior Bailey Moroney said. “He has such great ideas. I’m just a little worried about how he is going to get the money to support the ideas he discussed at the debate. It seems a little impossible to fulfill these promises; I’m worried he’s too idealistic.”

According to CNN however, Clinton was the clear debate winner. Clinton remained calm, cool, and collected, showing her experience and her command of the issues. She employed light humor which gave her a more human face. Clinton successfully defended her much criticised “flip flopping” on issues with the line “I’m a progressive. But I’m a progressive who likes to get things done.”

Regardless of the success of the debate, there was something missing- the presence of Joe Biden. A podium was on standby for him in case he wanted to join the debate. Even though he did not debate, he still supported those who did.

“I thought every one of those folks did well. Thanks,” the vice president said when asked about his thoughts on Tuesday’s prime-time event, according to a press pool report.

The debate last night proved that Hillary is running against the “B” team. She won’t be so lucky when it comes to me!

Where my Bernie at #DemDebates