Students volunteer at Marjory’s Garden every Sunday for service hours 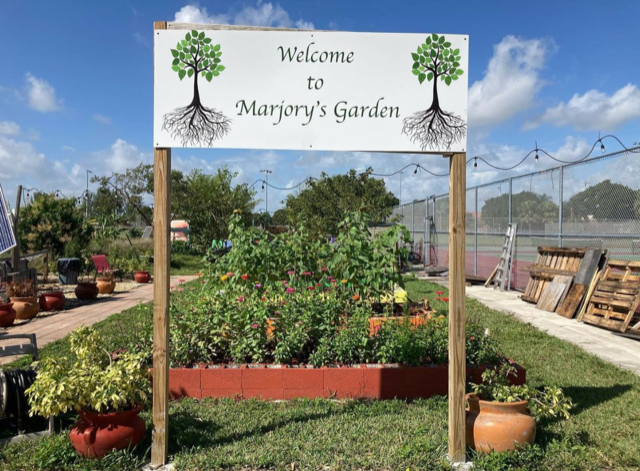 Waking up early morning to volunteer at Marjory’s Garden, the official garden at Marjory Stoneman Douglas High School, is an activity that many students engage in every Sunday. Volunteers have reinvigorated the garden and continued its maintenance in order to give everyone an outdoor setting to eat lunch or accomplish work in.

While in quarantine, students struggled to find ways to complete their service hours. Due to the ongoing COVID-19 pandemic, there was panic regarding whether or not these students would be able to fulfill their 40-hour requirement to graduate or bypass the 250-hour requirement to earn the silver cord.

“Once school shut down in March, I automatically started to worry about my service hours,” sophomore Mya Ryan said. “Being in my sophomore year, I wanted to get as many service hours as I could, so when I realized I had an opportunity to achieve that at the garden, I jumped at it.”

Additionally, students saw Marjory’s Garden as a chance to socialize with their peers again, outside of their house. However, volunteers still follow safety precautions, such as keeping six feet apart and wearing a mask at all times.

“I heard about volunteering at Marjory’s Garden during quarantine [and] saw it as a chance to see some of my peers again while giving back to the school,” junior Isabella Cristancho said. “It was nice to see students again in person and not just on my computer screen, getting to work together as a team again.”

As students continuously show up to volunteer at the garden, few have assumed leadership roles among their peers. As Marjory’s Garden is also considered a club, positions such as Officer of Marjory’s Garden are available.

Junior Marlo Perkins is one of the students who have shown their leadership skills and hard work towards the garden, having been awarded an officer position.

“I have just recently become the Officer of Marjory’s Garden,” Perkins said. “I’ve been volunteering there since the garden reopened because of COVID-19. My friends and I always took redoing the garden very seriously because before people were volunteering, the garden felt very dead and it wasn’t as vibrant as it should have been.”

Once students started to volunteer at the garden, it quickly became a goal to give it a makeover. Volunteers have organized the shed, replanted flowers, repainted benches and added fun games to the area.

“At the beginning of volunteering, we all started to take out weeds and replace soil to put new plants in the beds,” senior Kenneth Saucedo said.

The officers also made it a priority to come up with games to play in the garden to keep things fun and interesting.

“We wanted to keep the garden fun for students to keep on coming in,” Cristancho said. “A couple of us decided to make a chessboard and buy chess pieces so people can enjoy a game in the garden.”

Marjory’s Garden is continuously improving due to the volunteers that dedicate their Sundays to its renovation. In hope of making the area more lively and enjoyable, MSD students continue to dedicate their time and effort every week.