[Opinion] Plastic straw bans are not enough to save our oceans 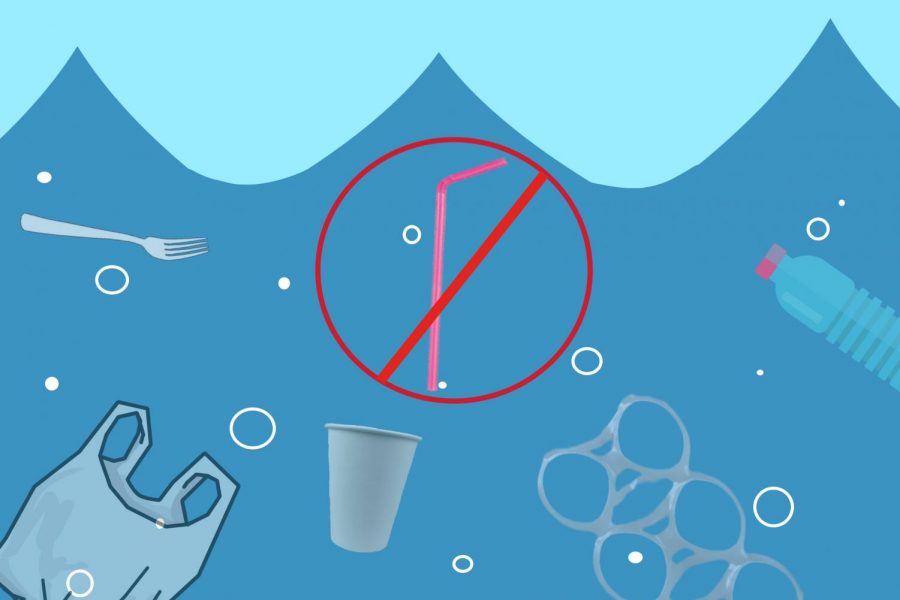 As trash builds up in our oceans, new bans have been put in place to help save our seas before it's too late. However, some bans, such as the one on plastic straws, have been found to be counterintuitive. Graphic by Melodie Vo

As waves wash up tides of trash, sea animals get trapped in plastic netting and coral populations die at an alarming rate, many have raised concerns about the deteriorating conditions of one of nature’s most important ecosystems: the ocean.

In order to understand the magnitude of the environmental crisis Earth is facing, consider the use of plastic bottles. Beverage companies produced 239 billion plastic bottles in 2004. By 2017, that total had more than doubled to 494 billion. The trend continues to increase with predictions to reach 594 billion by 2022.

Worse off, only a small percent of plastic materials are returned for reprocessing or reuse. In fact, less than 9% of all plastic gets recycled. Most plastic will be piled up in landfills for years to come or littered around the natural environment. Only 44 out nearly 200 of the world’s nations have the ability to produce reused plastic that is pure enough to be used in food and drink containers.

Over 10 million tons of plastic are dumped into our oceans annually and 50% of all plastics produced are for single use purposes, meaning that 190 million tons are used for just minutes and then thrown away.

The horrible conditions of our ocean have affected our innocent sea life.One million marine animals are killed by plastic pollution every year. Some of the sea life that are common victims of marine debris include turtles, corals, dolphins, sharks, seabirds and whales.

Sea turtles mainly feed on jellyfish and can easily mistake a plastic bag for food. Ingesting plastic can result in health issues or death. Despite being very intelligent creatures, dolphins also fall victim to marine waste. They can mistake plastic bottles for fish and choke when attempting to consume it.

To add on, coral reefs have also been affected. Coral reefs are extremely complex systems, created from millions of different species working in symbiotic relationships. Reefs are very sensitive to changes in their environment such as ocean acidification, warming water temperatures and plastic in the ocean. Due to the deteriorating quality of the ocean, large chunks of the world’s reefs have been dying off. Looking at the Great Barrier Reef in Australia, more than half of its corals have been lost since 1995 due to warmer seas driven by climate change.

In an effort to minimize the amount of waste in the oceans, many companies have tried to limit their plastic waste in just one way: switching from plastic straws to paper ones. Companies like Starbucks, Hilton and Disney, along with celebrities like Tom Brady and Mick Jagger, are just some people leading the pack in an anti-single use plastic straw campaign called #StopSucking.

Many brands have chosen to gradually phase out plastic straws, or to only give them to customers who have explicitly asked for one in order to limit unnecessary waste. However, other brands seem to be operating on a counterintuitive approach.

Starbucks announced that by 2021, plastic straws will be removed from every location across the globe. However, replacing the straws will be a “strawless lid” similar to the setup of sippy cups, which will be made out of plastic.

“These lids are going to be made of even more plastic than the straws,” Dianna Cohen, CEO of the Plastic Pollution Coalition, a California-based environmental group, said. “It’s kind of ridiculous.”

Other companies have shifted to paper straws, which have received their fair share of criticism. Those who have used paper straws claim that they get soggy quickly, making drinking a beverage unappealing.

Additionally, plastic straw bans place the blame on consumers rather than the companies who should be held accountable for making products that harm the environment. In the grand scheme of things, companies are the ones who need to be at the forefront of the plans to save the environment through changing their methods of production drastically.

While switching from plastic straws to paper ones is helpful, it will barely make a dent in the over 5.25 trillion pieces of trash taking up our ocean space and suffocating our sea life.

Even if straws can be corralled, they make up only a tiny fraction of the plastic that ends up in the world’s oceans. A study last year found that 46 percent of the plastic waste in the Great Pacific Garbage Patch — located between California and Hawaii — came from fishing nets.

Some of the nets are lost, while others are damaged and abandoned. The biggest brand contributors to plastic pollution are Coca-Cola, Pepsi and Nestle — all companies who mass produce bottled drinks.

If we really want to save our oceans, we need to start now. Minor changes in our everyday lives can have drastic positive effects on the ocean. When you go to the supermarket, bring reusable tote bags instead of using single-use plastic grocery ones. If you have old plastic grocery bags, you can save them and reuse them to carry other things.

In an effort to cut down on plastic bottle waste, individuals can purchase a reusable metal water bottle that they can carry with them and fill up when needed. Additionally, metal reusable straws are a necessity, especially for those who dislike the paper alternative.

At companies like Starbucks and other drink-based places, instead of asking for a plastic cup with a plastic lid and straw, bring your own reusable cup that they can fill up. Old plastic can also be reprocessed and transformed into art, clothes and house decorations.

If our society shifted to using reusable and sustainable items, waste in our oceans would decrease immensely and we could start rebuilding our sea environment. However, I worry that this is too big a task for a world that complains when they are offered a paper straw in exchange for a plastic one. I hope that we can come together and hold each other accountable for the waste we produce and continuously work towards creating more sustainable alternatives.