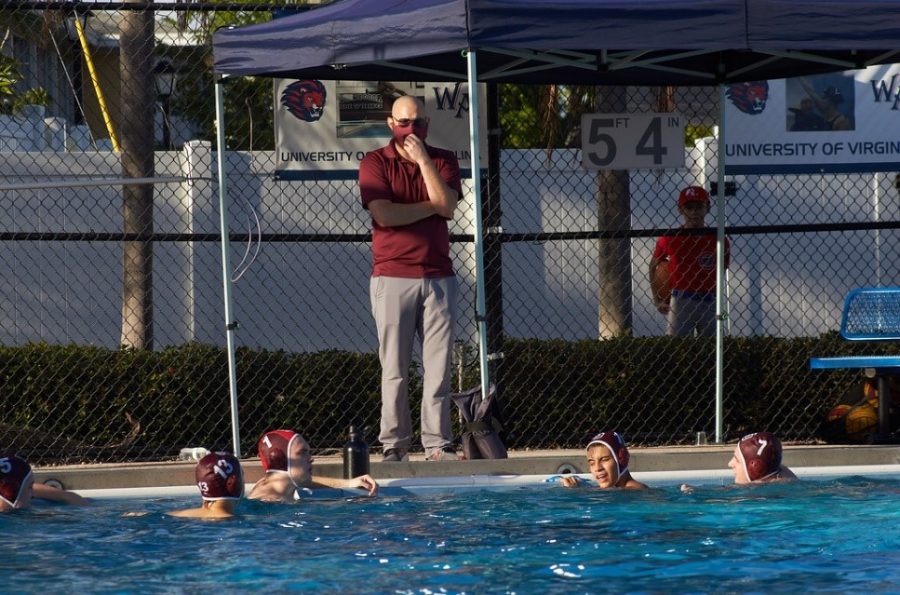 Coaching. Water polo coach Jacob Abraham talks to his team on the side of the pool during a game against West Minster Academy. Photo Maria Jose Vera.

The Marjory Stoneman Douglas High School men’s water polo team capped off a great campaign this spring season, with a 5-1 record.  After beating Taravella, the team moved on to the championship to face Coral Springs. Although the Eagles lost by a score of 2-15, they still believed the entirety of their season was a success.

To start off the season, the Eagles faced Coral Springs High School on Feb. 25, losing 3-18.

Despite their first loss, the team managed to beat Coral Glades High School, a co-ed team, 24-2 on the road on March 2.

Players and coaches on the team attribute this quick turnaround to practice.

“We work on playing smart at practice and it makes a difference,”  water polo coach Jacob Abraham said. “Having that first game for some players or having the first game in over a year gives you a sense or reminder of what it’s like to play against someone else and to play full speed.”

After their first win, the Eagles looked to keep that streak alive, facing Cardinal Gibbons on March 4. MSD took them down with a final score of 20-2.

Next, on March 16, the Eagles beat Westminster Academy 17-16 at home, bringing their record to 3-1

“I think the first game we were all just trying to get used to being a team,” wing position and sophomore at MSD Harjith Pradeep said. “I think our team chemistry got stronger as the season went on and we had more trust in each other which allowed us to win these games.”

On March 17, only a day after, the Eagles were able to beat South Plantation High School on the team’s senior night.

“The seniors or juniors who have been playing year round with a club team or have been on the Junior Olympic team know what they’re doing,” Abraham said after the win against Cardinal Gibbons High School. “But if you’re still new to the sport you need to learn the spacing of the game, the simple movements, and not to crowd your teammate.”

On March 30, the Eagles, who were ranked as the second seed, were set to face Taravella, who held the third seed position in the district tournament. Taravella forfeited, due to COVID, which resulted in the Eagles advancing to the championship due to an automatic win.

Just a day later, the Eagles faced off against the number one seeded Coral Springs High School, who also won their first district game due to a forfeit. The Eagles, who were 5-1 up until this point, lost 2-15.

Although they lost in the championship, the Eagles had a great tournament run, one which many players will remember.