Netflix’s most popular content on April 14 is worth watching 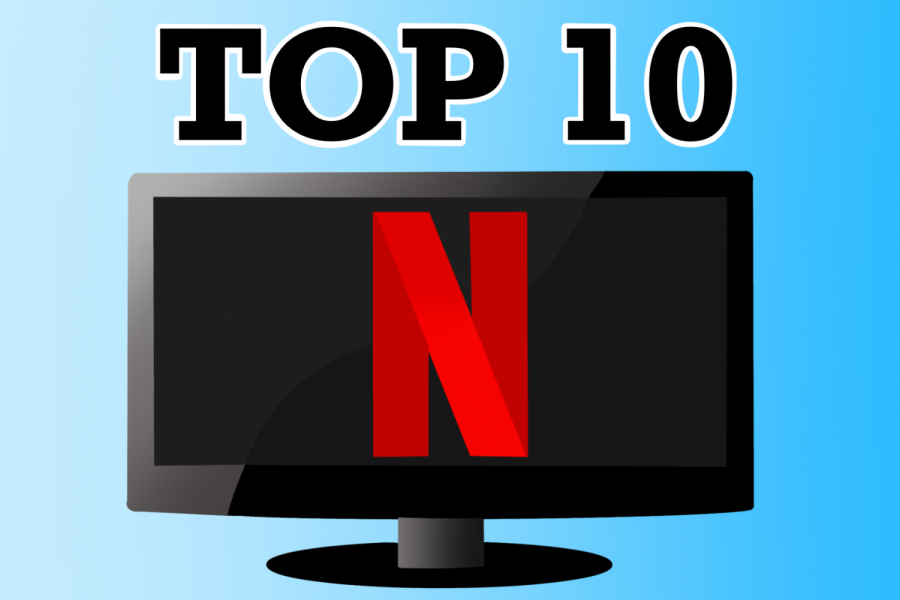 Netflix releases daily lists based on the most popular shows and movies on the platform. Graphic by Madison Lenard

Netflix releases a weekly top-ten on their website called “Top Ten in the U.S. Today.” This changes with whatever is popular that day and can be found on the “New and Popular” tab on their website.
1. “Who Killed Sara?”

“Who Killed Sara?” is a Mexican crime drama. The storyline begins with Sara Guzman, the main character, passing away following a parasailing accident. Sara’s brother, Alex Guzman, falsely places the blame on himself rather than his best friend and Sara’s boyfriend, Rodolfo Lazcano. Alex stays in prison for eighteen years and eventually goes against Rodolfo Lazcano’s family.
2. “This Is a Robbery: The World’s Biggest Art Heist”

“This Is a Robbery: The World’s Biggest Art Heist” is a documentary that discusses what occurred on March 18, 1990. A building in Boston named Isabella Stewart Gardner Museum that was robbed. Two men acted as fake police officers and disappeared from the museum with famous works of art, valued at $500 million. No person was ever charged with the crime and there is still an unclaimed $10 million reward.
3. “The Serpent”

“The Serpent” is a true-crime thriller. It is based on true events that happened in the 1970s on the South East Asian hippie trail. It begins with a gem dealer, Charles Sobhraj, committing many crimes towards backpackers with the help of his girlfriend Marie-Andree Leclerc and Ajay Chowdhury. The show illustrates how a diplomat and his wife at the Dutch Embassy Herman Knippenberg brought justice to Sobhraj.
4. “Cocomelon”

“Cocomelon” began as an American YouTube channel named “ThatsMeonTV” 2006 and launched as “Cocomelon” on Netflix in 2020. It is a musical TV series that provides nursery rhymes and excitement for children. Through this show, children can learn letters, numbers and animal noises with J.J., the youngest member of the Cocomelon family.
5. “Family Reunion”

“Family Reunion” is an American comedy TV series that was created by Meg DeLoatch and launched on Netlflix in July 2019. It is about a family of six members traveling from Washington to Georgia to visit the McKellan family reunion. Afterward, they chose to stay in Georgia in hopes of being closer to their family and have a difficult time adjusting. “Family Reunion” shows the very comedic ups and downs that the family experiences.
6. “Nicky Ricky Dicky & Dawn”

“Nick Ricky Dicky & Dawn” is an American comedy sitcom aired by Nickelodeon, from September 13, 2014, to August 4, 2018. It follows the everyday lives of quadruplets, finding ways to get themselves in and out of trouble. The quartet is comprised of Dawn, the “alpha”; Nicky, the quirky one; Ricky, the smart one; and Dicky, the charming one. The show is based in Boulder, Colorado.
7. “The Stand In”

“The Stand In” is a movie surrounding an actress and her dopplegänger. It starts with Candy Black, played by Drew Barrymore, who has a meltdown on set and is pushed to become isolated for the following five years. In an attempt to avoid tax evasion, she hires lookalike Paula (also played by Barrymore) to go to rehab, on the condition that Candy returns to acting. This movie features popular celebrity cameos, such as Jimmy Fallon and Charlie Barnett.
8. “The Little Rascals”

“The Little Rascals” is a 1994 film adapted from Hal Roach’s 1920s-1940s short film ‘Our Gang.’ The story follows “girl-hating” Spanky and Buckwheat, representing their fellow friend Alfalfa in the soapbox go-kart race… only to realize he’s dating a girl! As the duo sabotages Alfalfa and his girlfriend––Darla’s––date, the group becomes chased down by bullies and Darla’s new lover, Waldo. At the end of the movie, Alfalfa is determined to win the race––to win back Darla and to defeat his bullies once and for all.
9. “Ginny & Georgia”

“Ginny & Georgia” is a Netflix original comedy-drama series that was released on February 21, 2021. It features Ginny Miller, a teenager whose mental age surpasses her mother; Austin Miller, a nine-year-old boy who believes in the magical; and Georgia Miller, a single mother with a shady background. As the family moves into a fictional town of Massachusetts after the death of their father, they realize there is more to the eye in the sleepy suburbia.
10.  “Sniper: Ghost Shooter”

“Sniper: Ghost Shooter” is a 2016 direct-to-video action film, and the sixth installment to the Sniper film series directed by Don Michael Paul. The movie shows elite snipers Brandon Beckett and Richard Miller given another task to protect Georgian gas pipelines. Their main enemies are Arab terrorists, looking for a political war. Tension builds in the film as a ghost sniper finds the exact locations of the snipers, threatening a security breach.